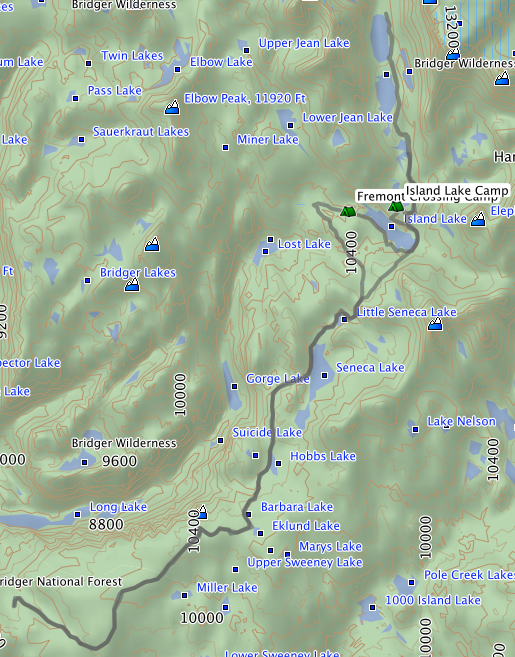 First off, I’m going to just go ahead and admit my bias: I love Titcomb Basin more than any other place in the Wind River Range. Bear this in mind when my prose gets poetic, and my descriptions get thick. I love it. If you’ve been there, you understand. If you haven’t, well, maybe this post will get you there. Seriously. You should go there.

We decided to head to Titcomb Basin with a friend, Kyle, who is one of the fishing guides here at the Great Outdoor Shop. He had never been, and so we decided to make a backcountry exploration/fishing trip out of it. We also decided that the time had come for Sierra to see it. She turned 9 this year and we figured her freakish physique and superhuman stamina (Her nickname is Turbo) could take it.  The forecast didn’t look awesome, but we aren’t exactly the types to be deterred by a bit of rain. We packed our rain gear and pack covers and hit the road. We were ready: here we go!

I discovered that my water bladder had dutifully leaked all over the contents of my backpack during the course of the night. Bust out the blow dryer…I am ready: here we go!

Grab the jack and tire iron, swap out the flat tire for a sparkly new tire…we are ready: here we go!

This time we actually were ready to go. The day was cloudy and cool, which I actually really enjoy while hiking. I mean, bluebird skies make for some bang-up photos, but back sweat feels gross, no matter how hardcore you are. We hit the trail in a hurry and began the monotonous forested first 4.5 miles of our trip. Don’t get me wrong, I love hiking out of Elkhart Park. However, after 8 years of living here and hiking out of this trailhead the dense forest at the beginning gets fatiguing, especially when I know what lies beyond the trees…

Here’s the thing: Sierra is 9, but she eats like a grown man. I’ve never seen someone so skinny eat so much, and I’m married to Josh, the man with the hummingbird metabolism. We had planned a more-than-average break timeline because Sierra just needs to stop and eat, especially when she is under exertion. I mean, I spent over an hour looking at snack foods in the grocery store and comparing their calorie counts, and compiling a mental list of how much she would need to eat per day. On a normal day she eats over 2,000 calories; in the mountains…it’s crazy. So, one of our planned stops was at Seneca Lake. We were just going to stop, dig out some food for her, and keep hiking, but Eagle-Eye Hattan noticed a big rainbow trout from the shoreline. So, out came Josh’s Tenkara rod, and our brief stop turned into sight-casting for trout, trailside. 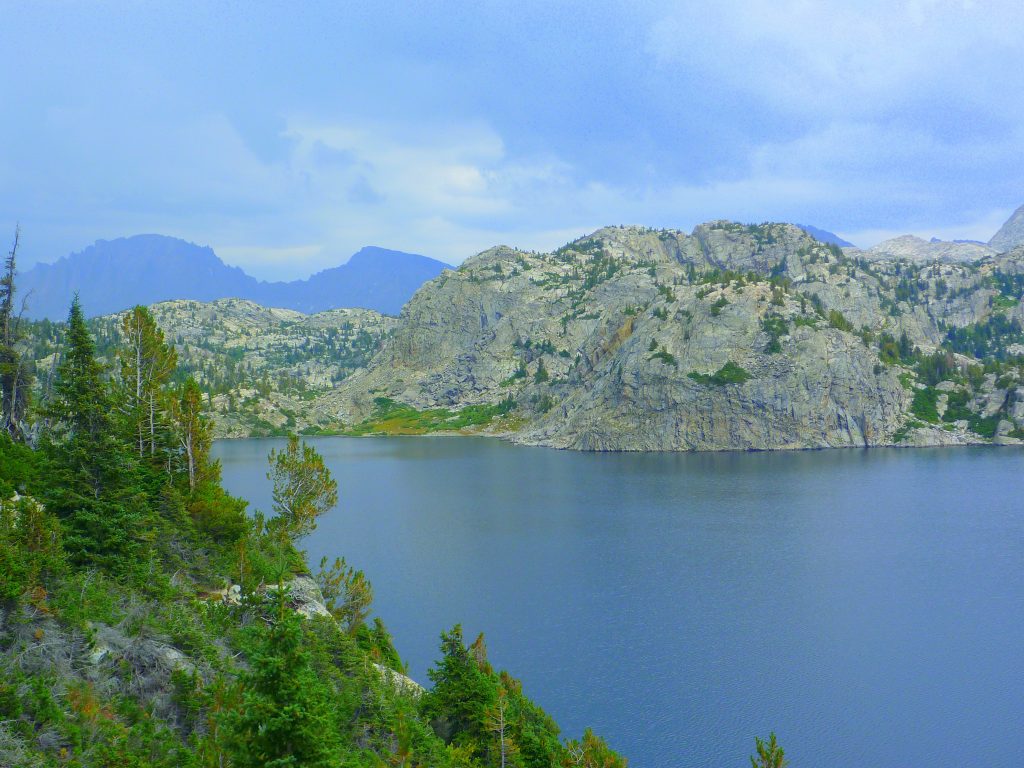 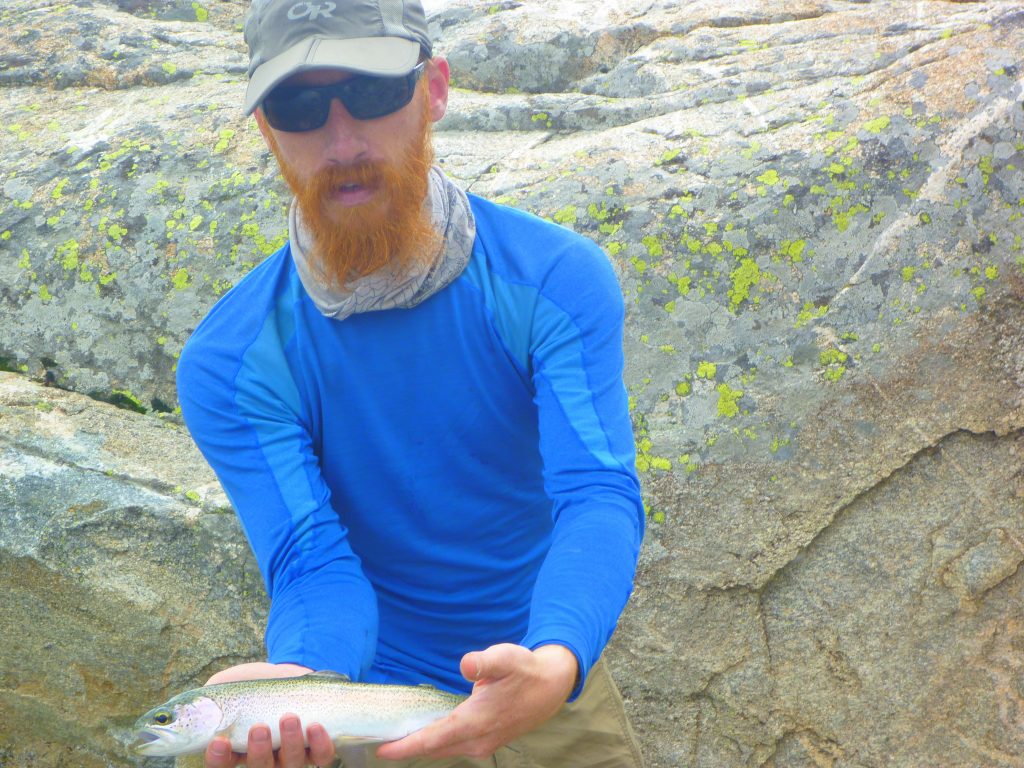 The rain finally caught up to us just after Little Seneca Lake. The lightning illuminated the sky and the thunder drowned out our conversations, so for a bit it was quiet as we picked our way through the boulders lining the Seneca Lake-Highline Trail junction. 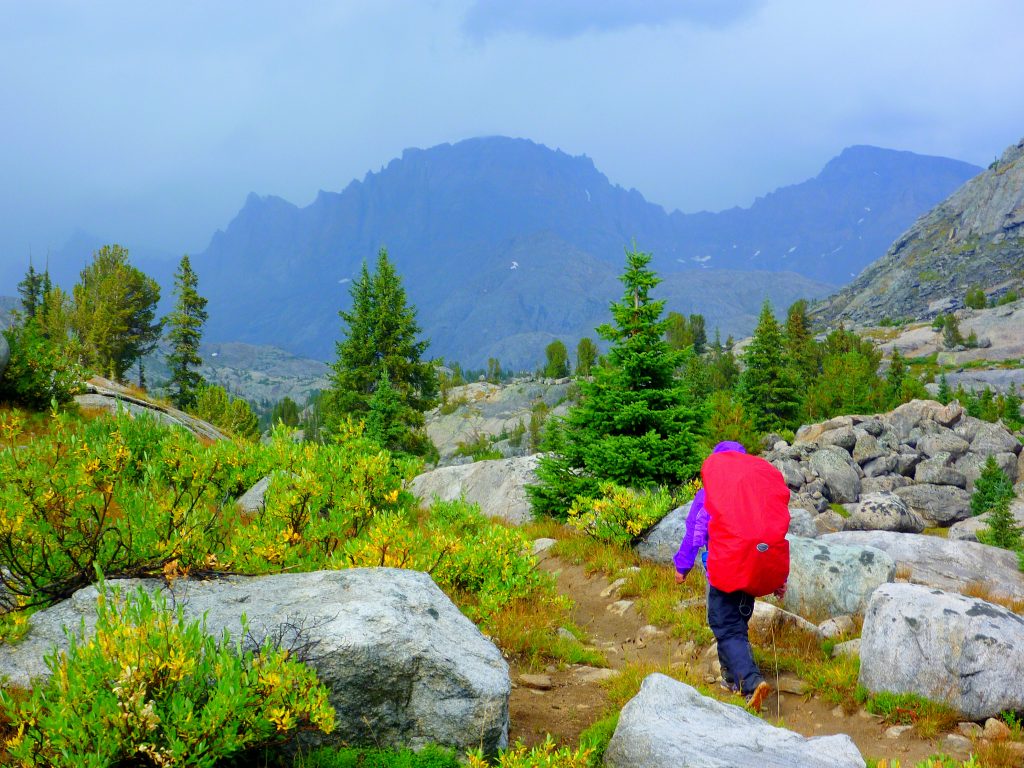 The rain was not lasting, and before long we were stopping again to shed our rain gear and warmer layers of clothing. The sun came out strong and warm, and for the first time that day it felt like summer instead of fall. When we made it to the bridge at Fremont Crossing, we paused for some more food, fishing, and playing in the sun. Plus, it was only about a half-mile from where we were planning on camping for the night so it’s not like we were in a big rush. 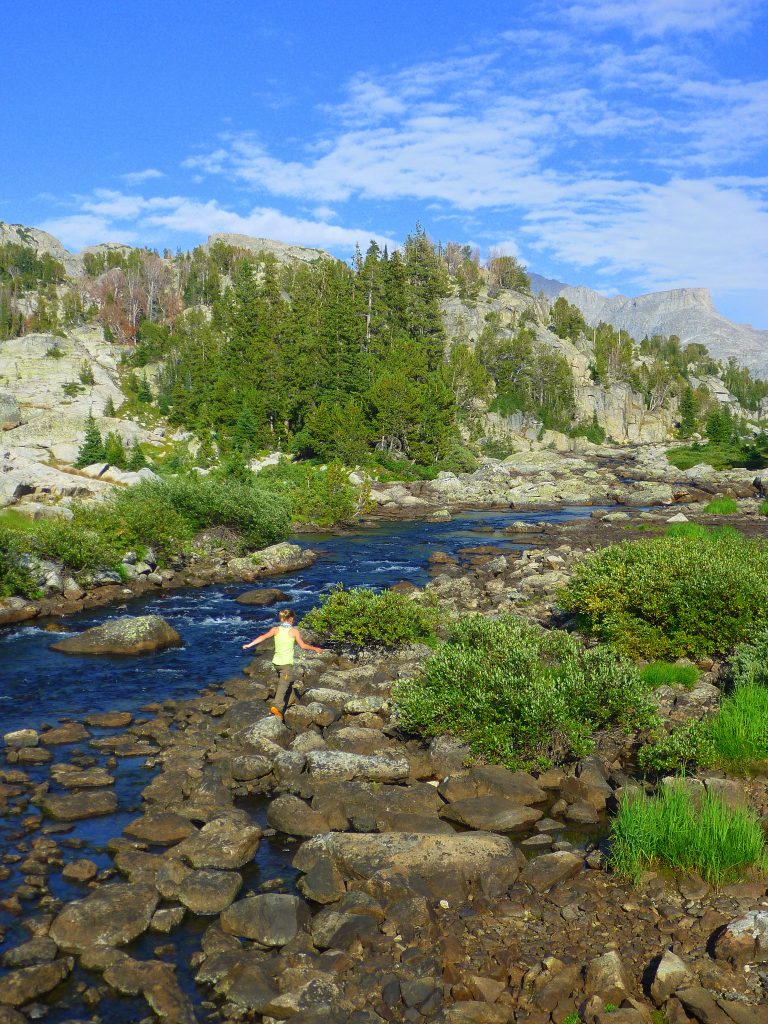 We began to pick our way east along the riverbed, fishing when we found a spot that looked interesting. There is not a USFS maintained trail that cuts from Fremont Crossing to Island Lake, but many people travel this shortcut so there is a trail of sorts you can follow pretty easily. You won’t see it on a map, but it’s there.

Our camp was pretty incredible, and offered plenty of playing opportunity for everyone. Lots of comfy recliner-shaped rocks for me to prop against and read, lots of rocks for Sierra to climb, stream for Josh and Kyle to fish, and views to please pretty much anyone with a soul. 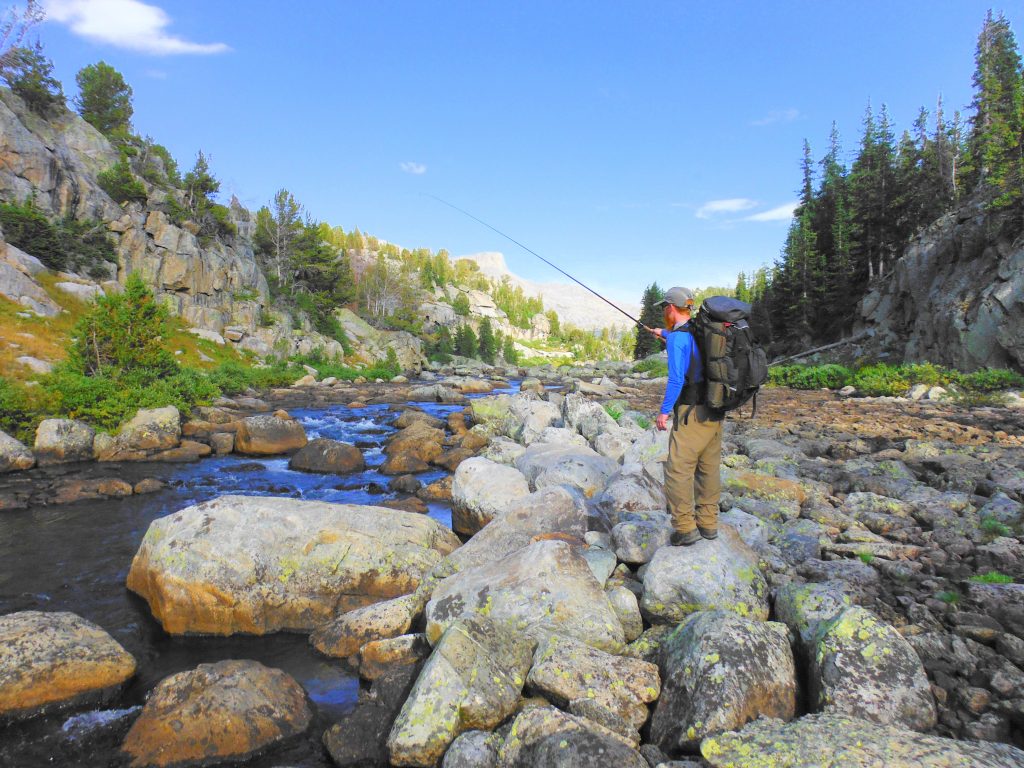 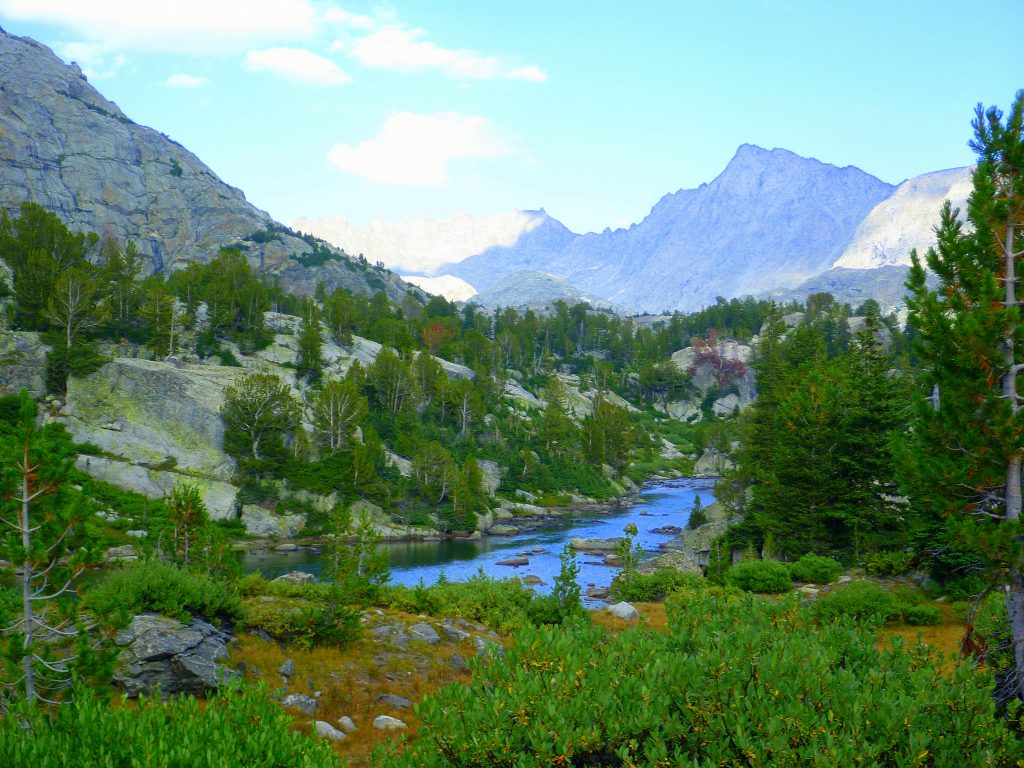 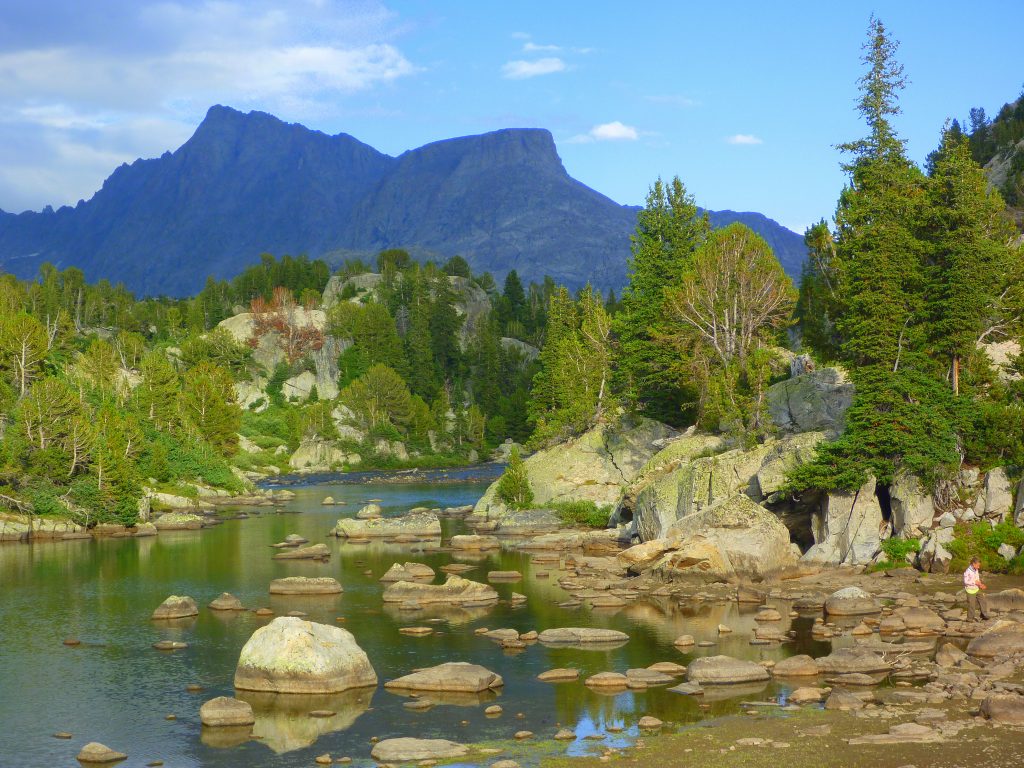 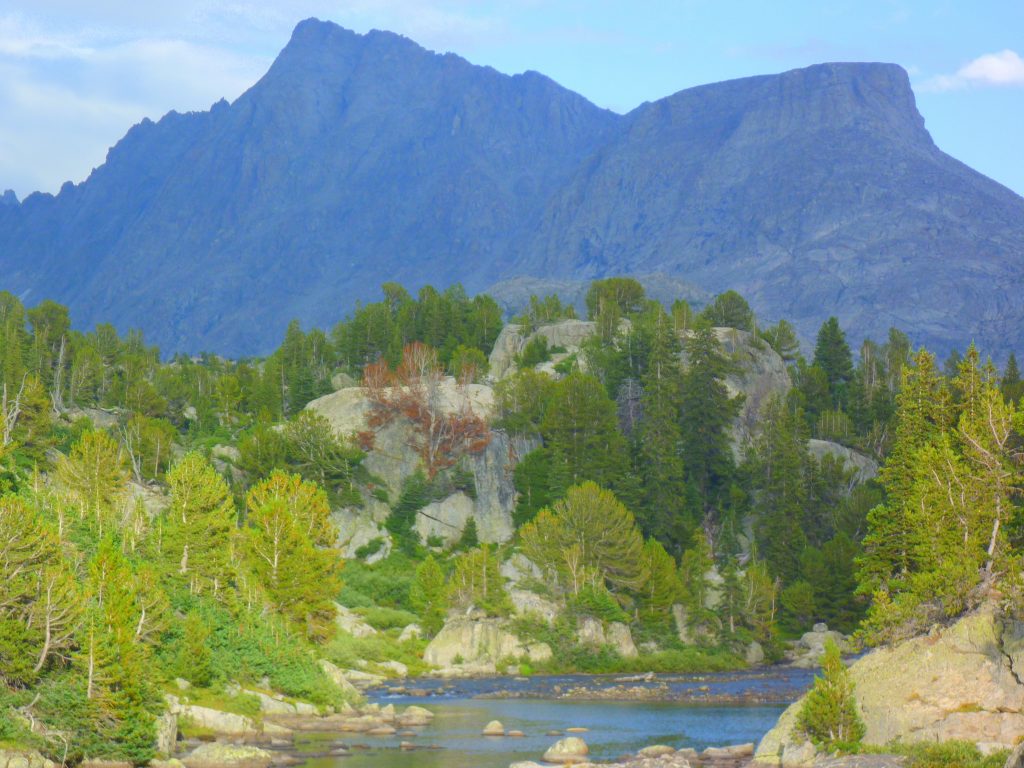 We dropped our packs at camp and got things set up pretty quickly. Turbo had backpacked 13 miles that day and was still running on high so she scampered off to make some mud castles in the riverbed. The girl just doesn’t run out, ever. Once dusk started settling in our little canyon, Kyle made his way down to the river to wet a line and Sierra decided to do some bouldering. I managed to catch both of them in their happy places at the same time, in the same place. Pretty cool. 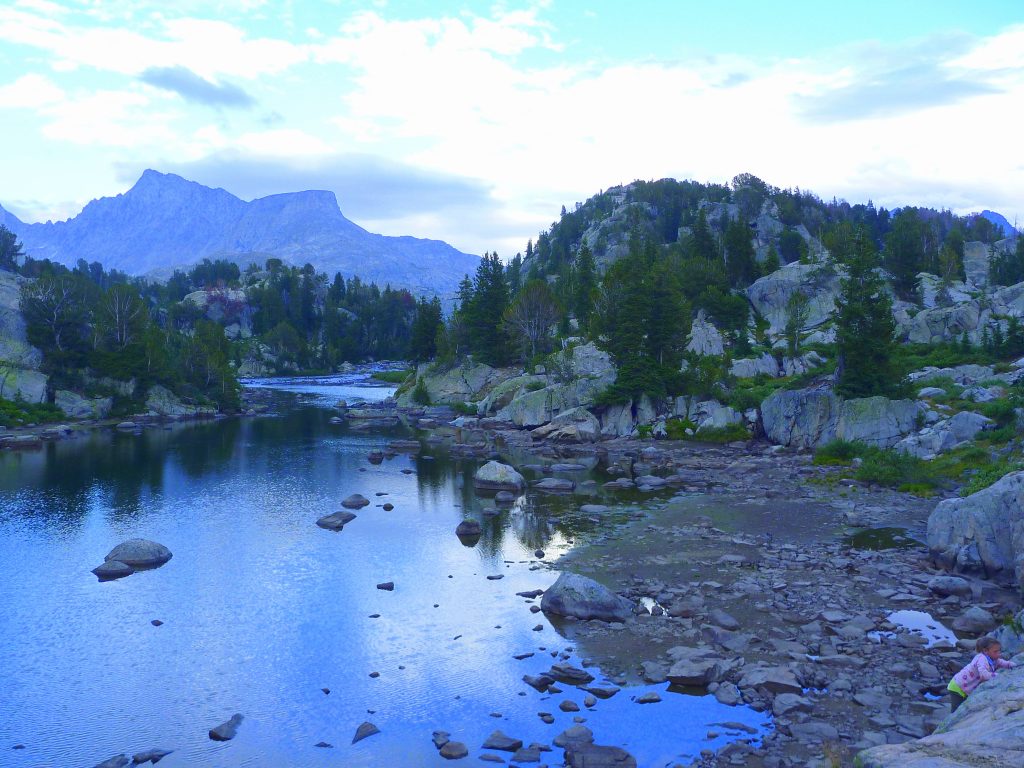 It rained BUCKETS that night. It didn’t start until late when we were already in our sleeping bags for the night, but it kept up for hours. We don’t get rains like that very regularly in our neck of the woods, so it was a welcome addition to the trip. Also, is there anything better than the sound of raindrops on a tent when you’re warm and dry inside your sleeping bag?

The next morning the guys went fishing before breakfast. Shortly after eating we packed up and decided to make our way to Island Lake for some more fishing and as a basecamp for hitting Titcomb Basin and the quest for the elusive Golden Trout. And, you know, I’m not sure if I mentioned it, but Titcomb Basin is STUPID beautiful, and I wanted to go again. The quasi-trail at Fremont Crossing takes you right back to the Titcomb Basin Trail at Island Lake so it is pretty convenient. 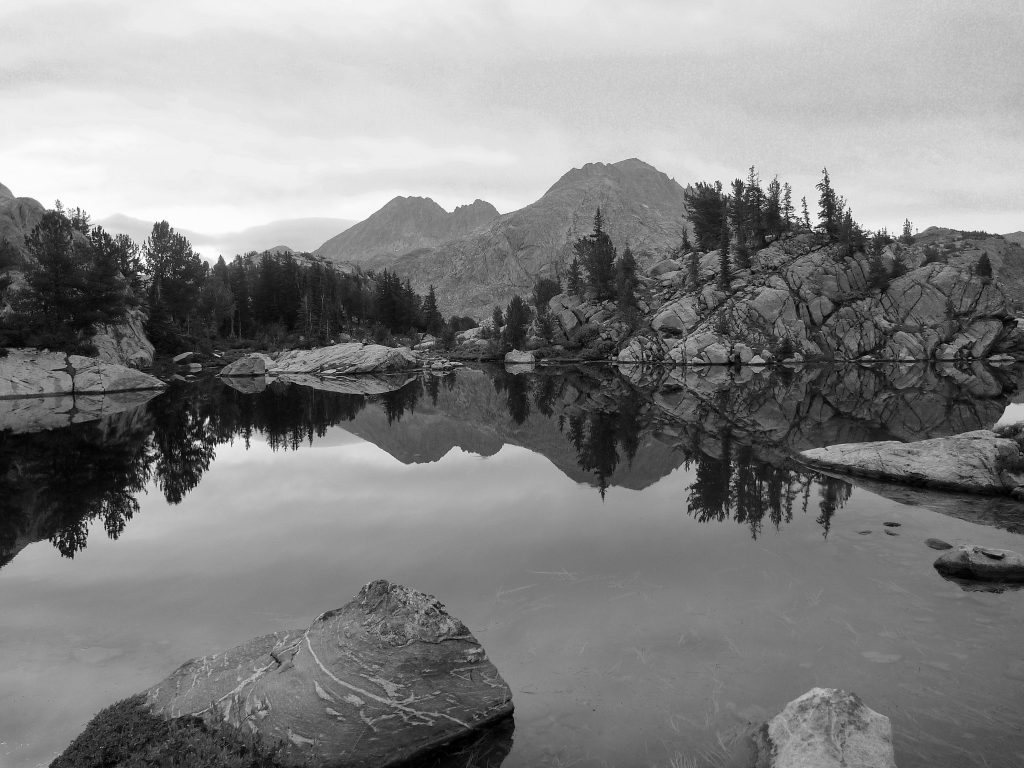 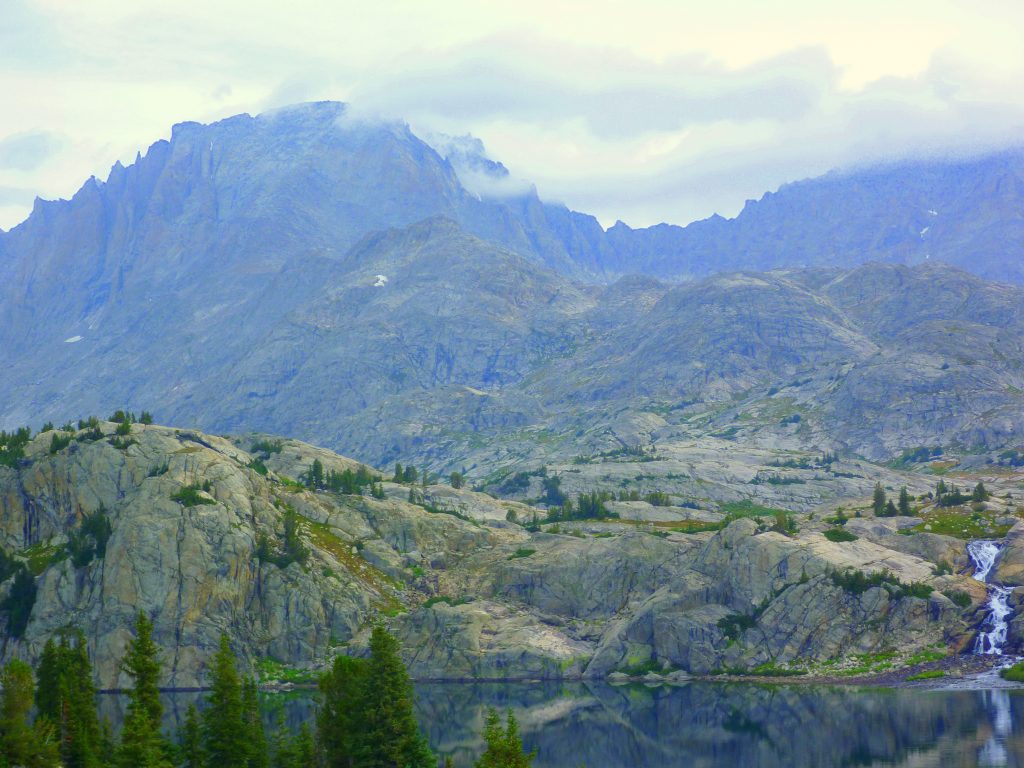 We decided to make our camp somewhere above the waterfall that drains into Island Lake. So, we wrapped around the Lake and began to pick our way that direction. By the time we got to the beaches on Island Lake the sun was out again in all of its glory. Kyle decided he would attempt to fish the waterfall section while Sierra and I explored and Josh searched for a good campsite. 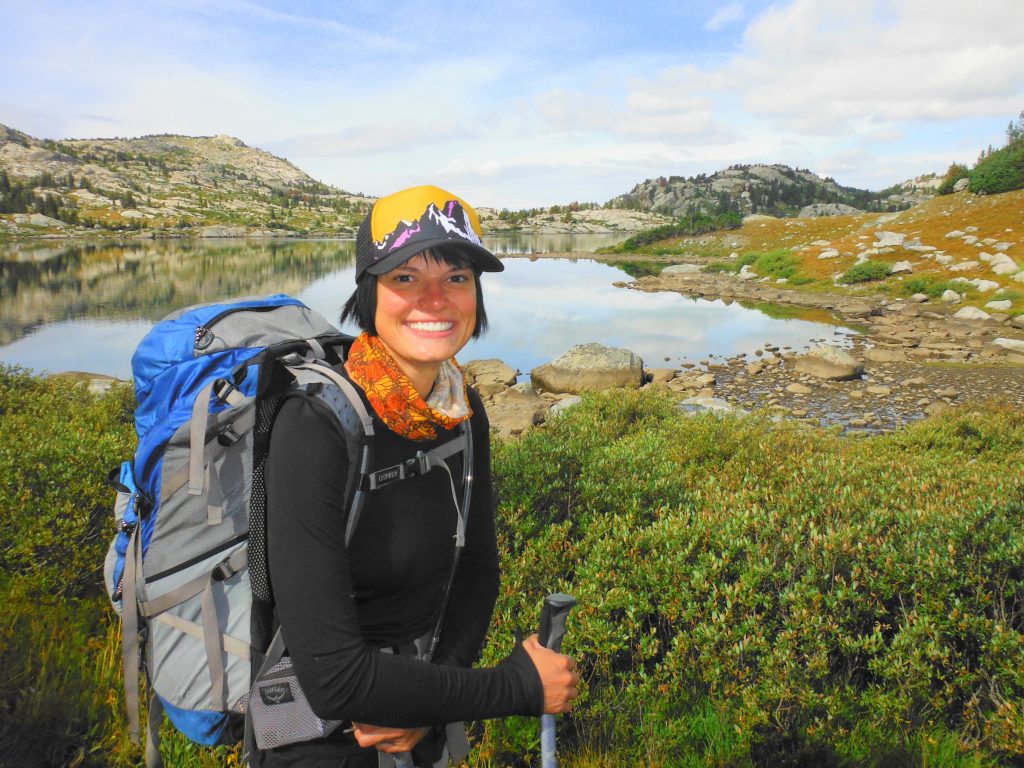 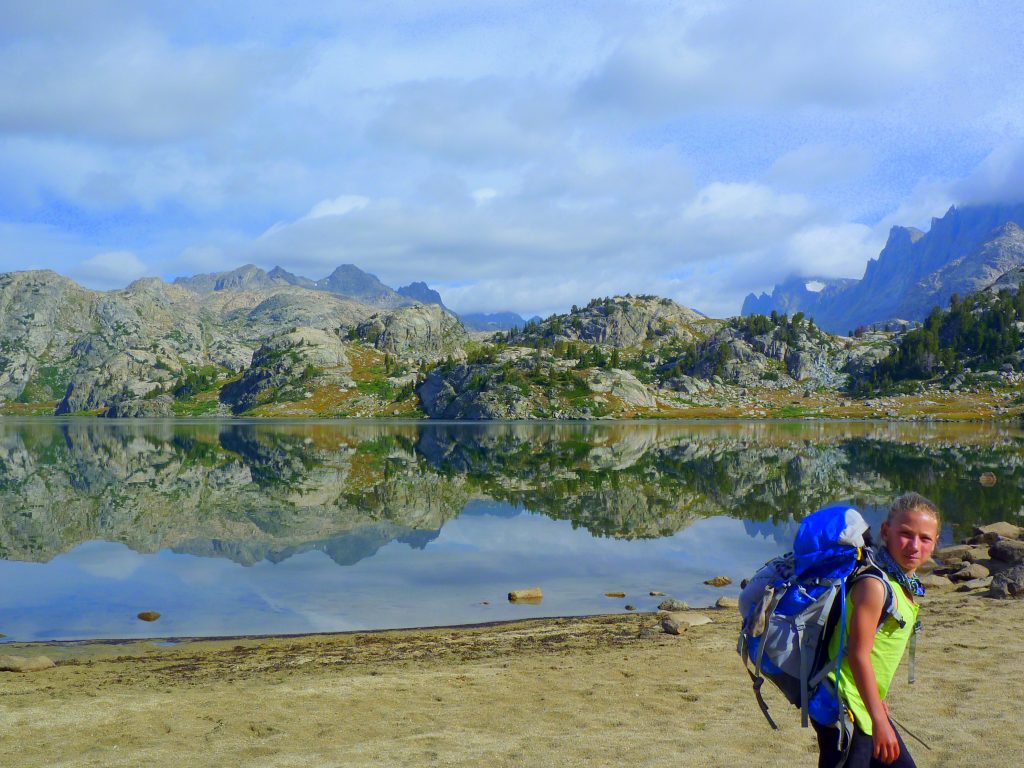 Kyle caught 5 fish in 5 casts out of Island Lake, on the Wind River special: a black wooly bugger. Meanwhile, Josh came back to us practically floating because of the incredible campsite he scored for us. He was so excited that he grabbed my pack and Sierra’s pack before I could even get to them and began running back up the hill. I think Turbo’s energy is genetic. 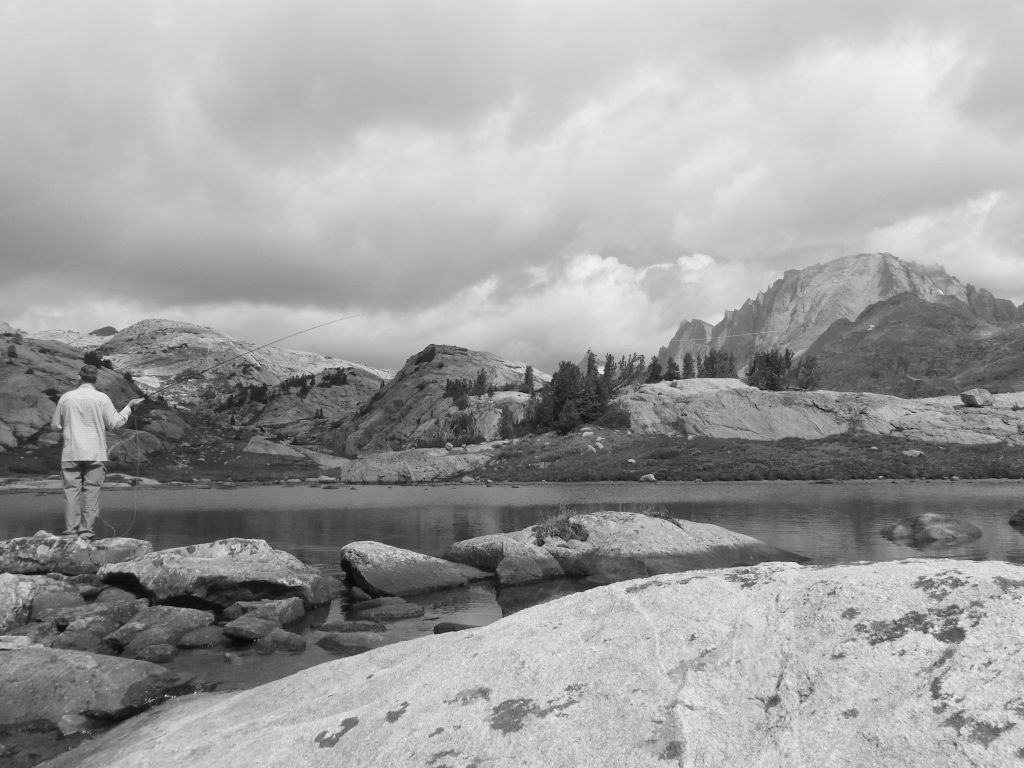 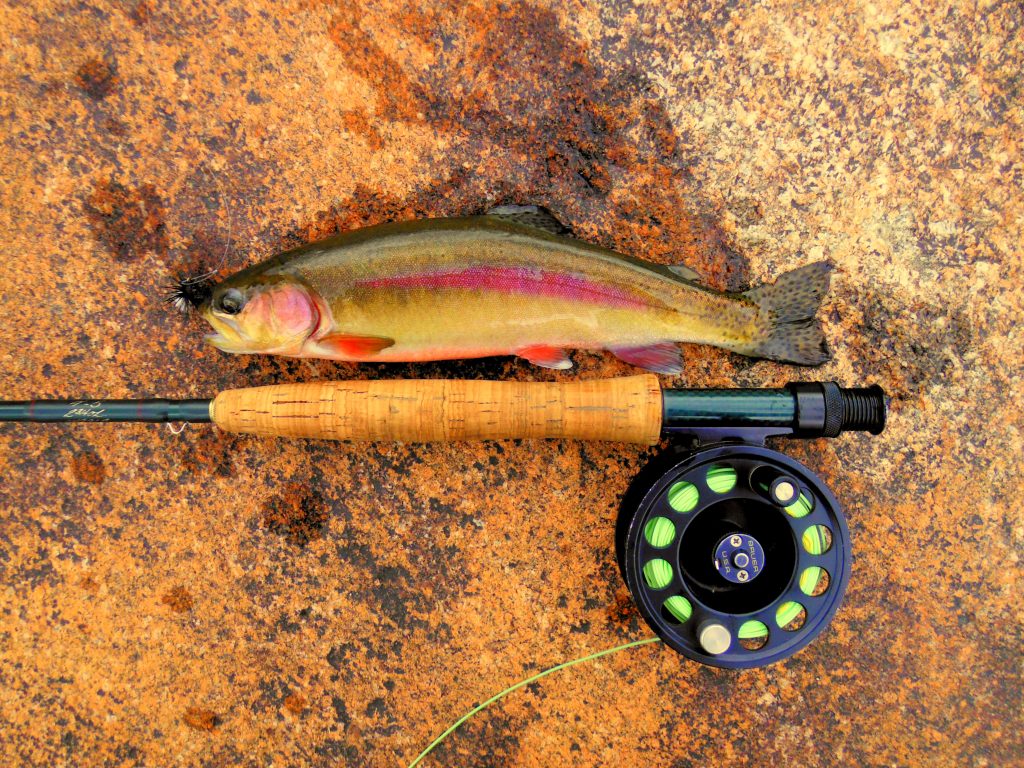 Sierra and I followed him up the hill, and I’ve got to say, the man can find a campsite. Kudos to Josh. I think that’s his thing. You know, his thing. Everyone has a thing. My dad’s thing is good parking spots. No matter where we are, no matter how crowded the parking lot is, my dad can find a great parking spot without fail. For Josh, it’s campsites, and this one was a doozy. 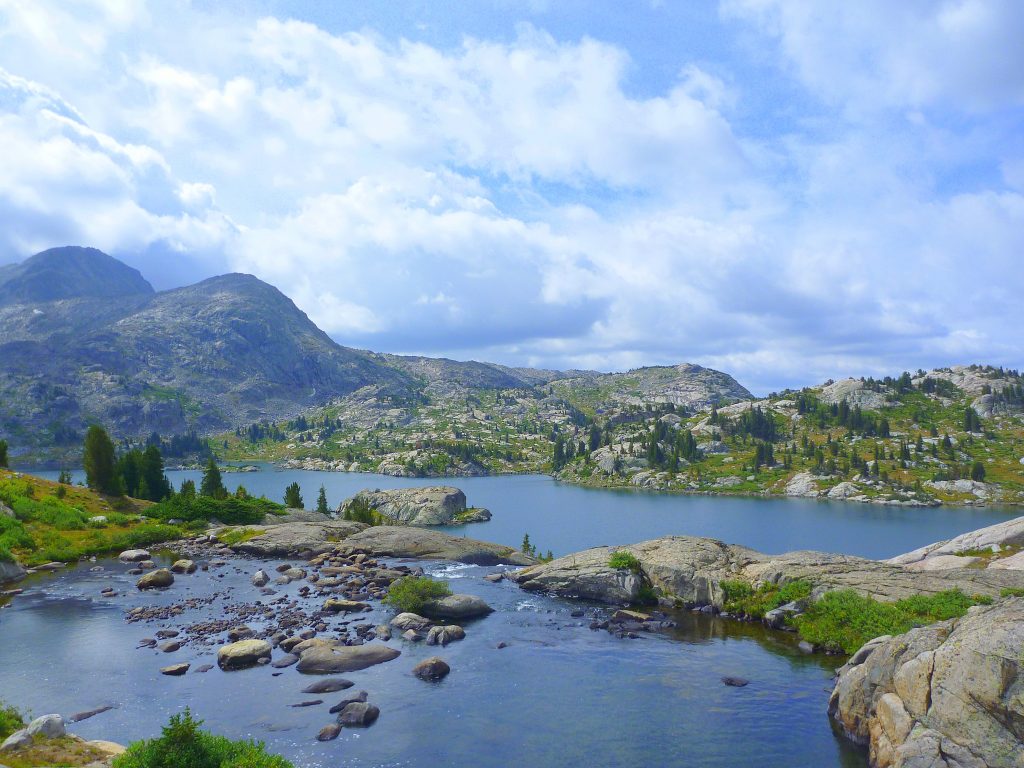 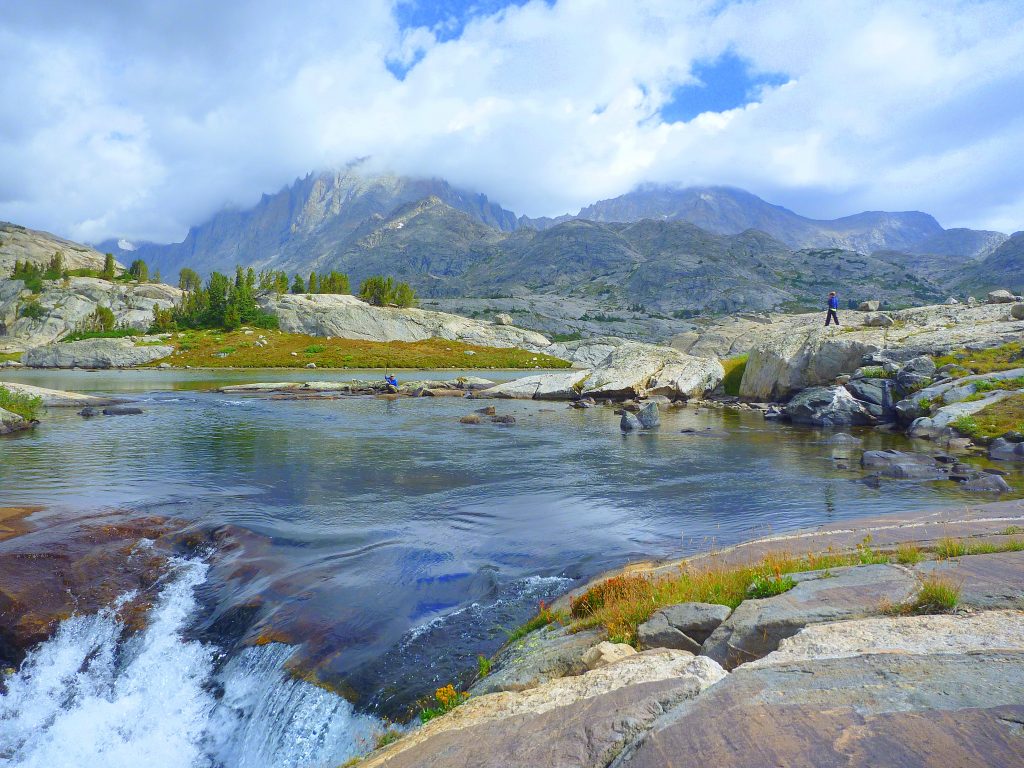 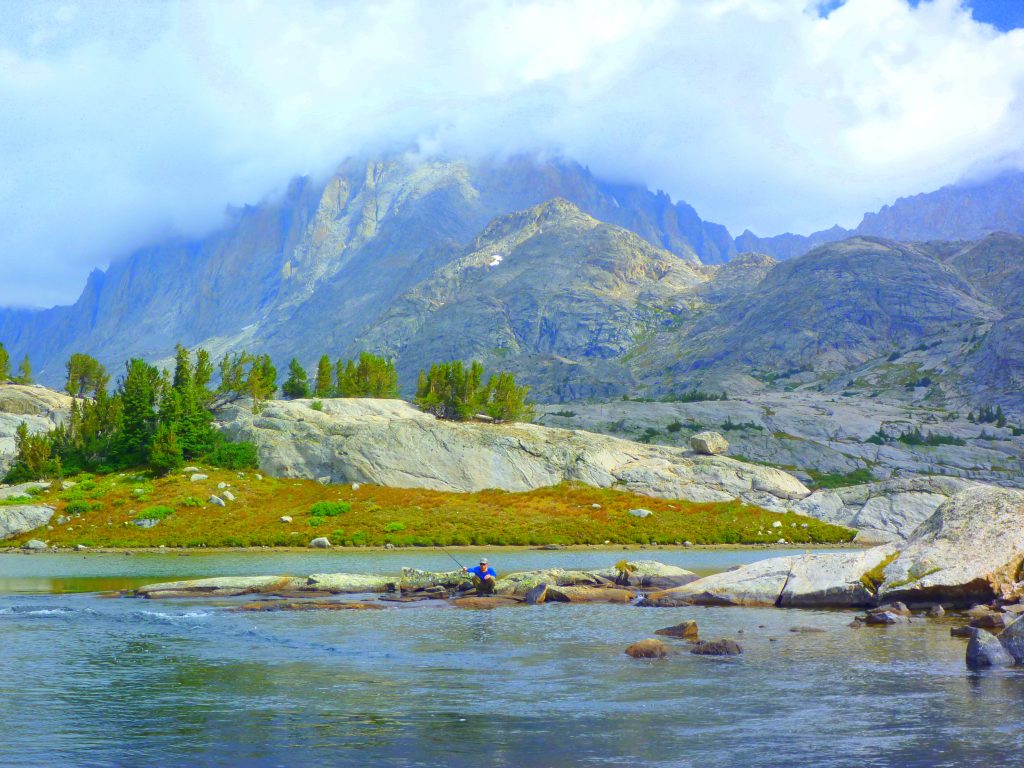 After we got our tents set up and our stuff stashed away in case of more rain, we packed up for the day and headed toward Titcomb Basin (yesssssss!) with stops along the way to fish at waterfalls that got better and better and better. The boys were successful on their mission to track down Goldens, and I finished a good book. 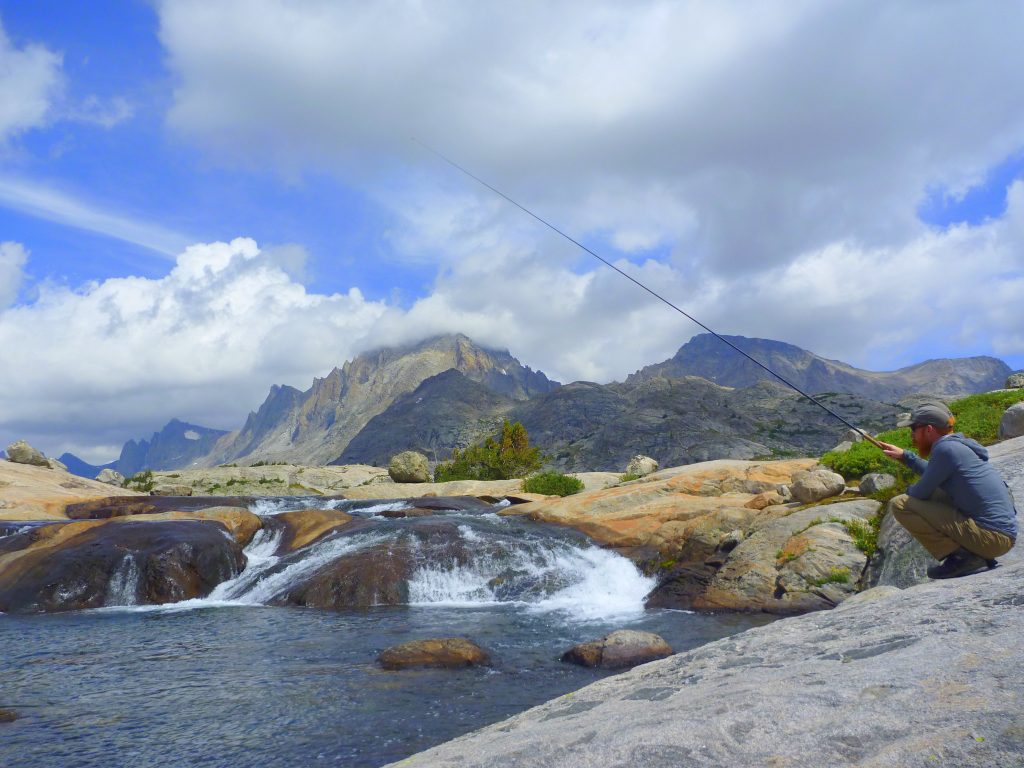 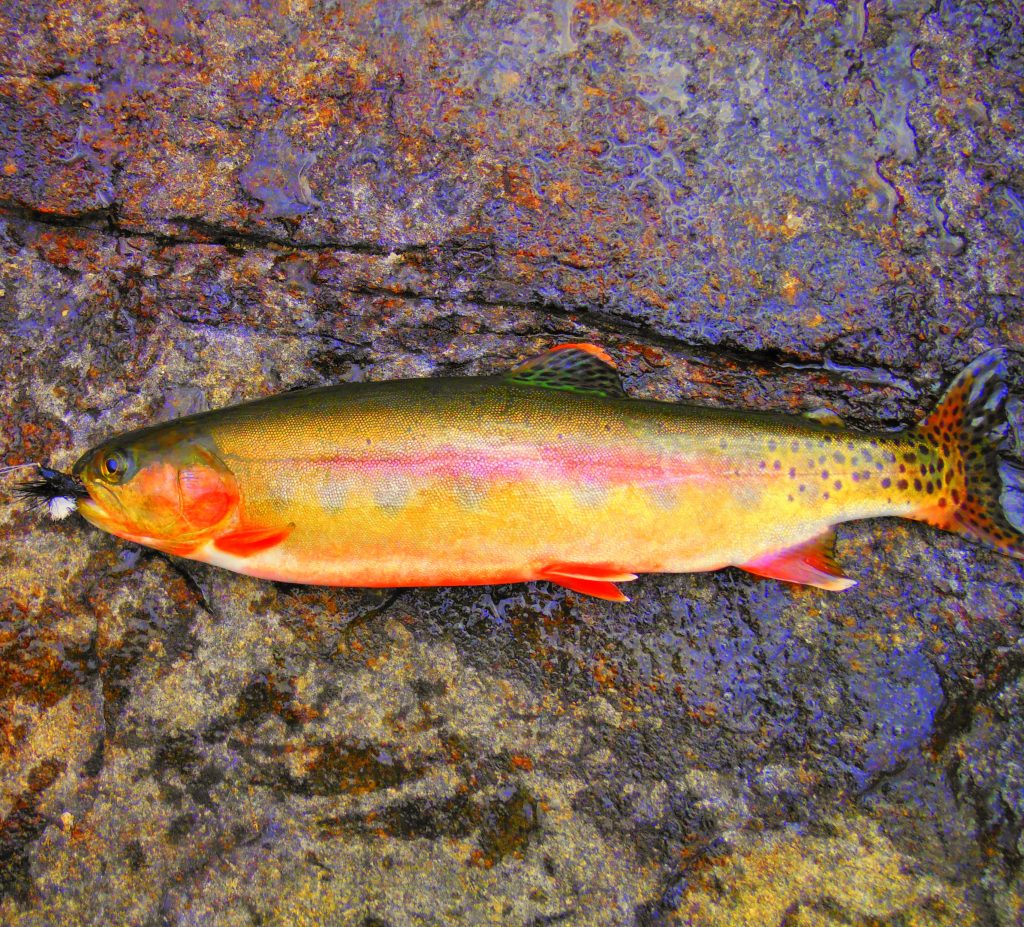 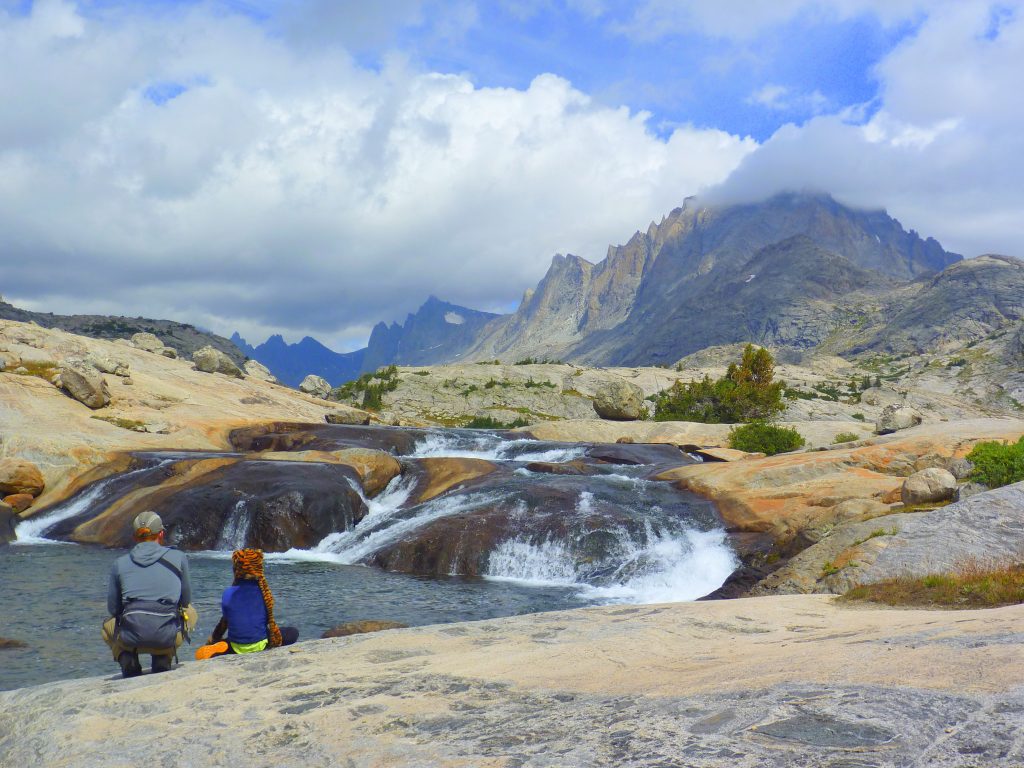 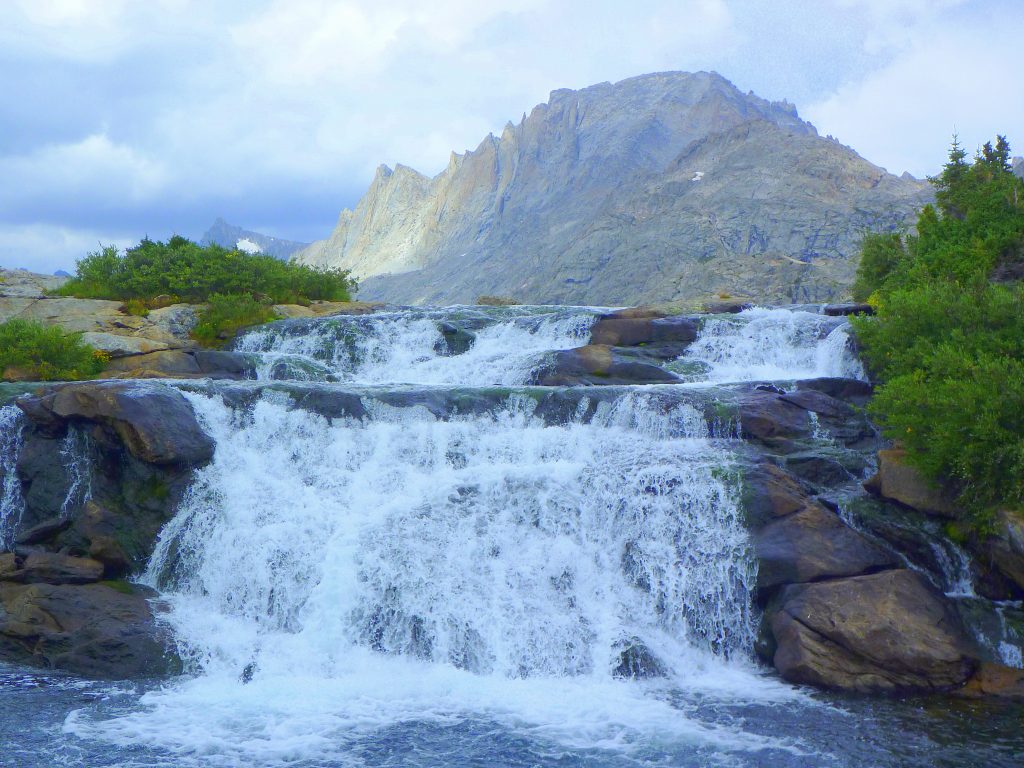 The clouds really started to move in and so did some icy cold rain; so our stint in the basin was short this time around. However, even a short visit to Titcomb Basin is worth the effort to get there. 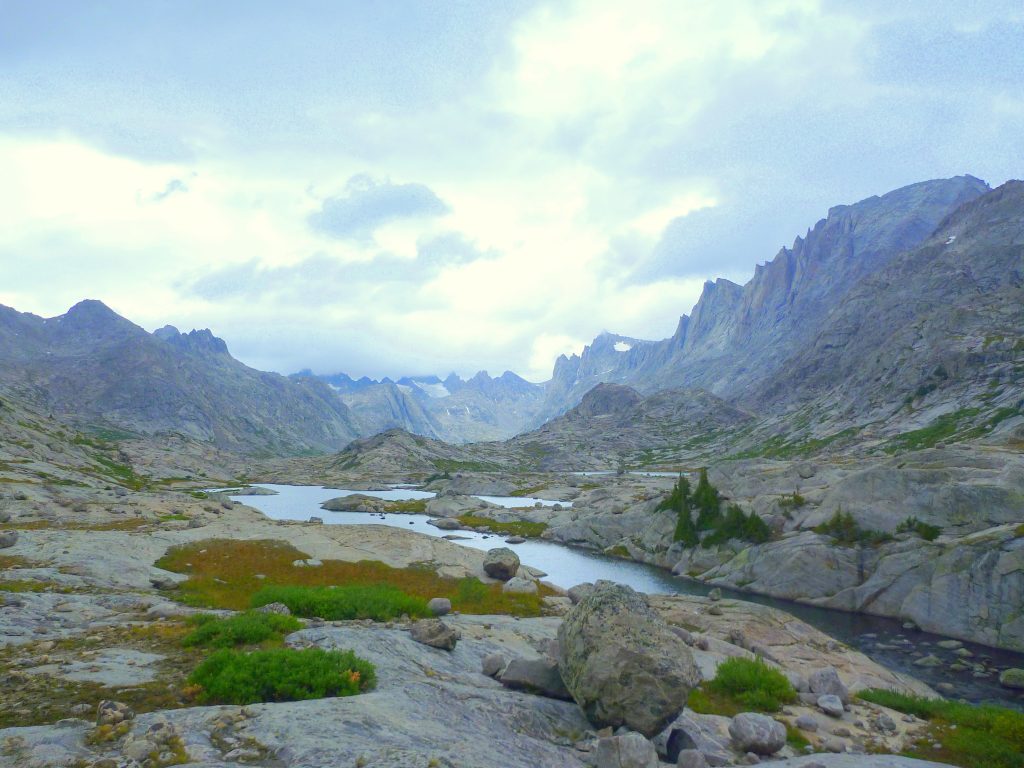 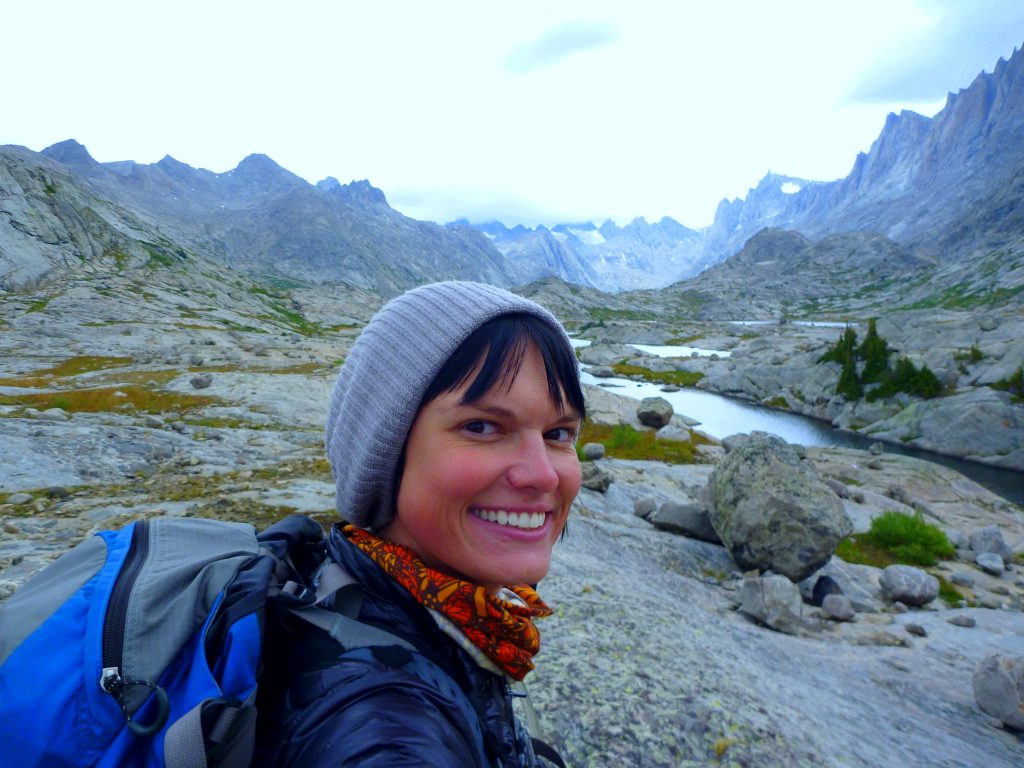 I love the feeling of being in this mountain basin. It’s almost majestic and I am humbled by the sheer faces and sharp rises. It is peaceful here, and time has a different meaning in a place like this. Along the hike, we found many different happy places: places to fish, places to read, places to sit and watch Turbo playing in the mud…this is the happiest place. 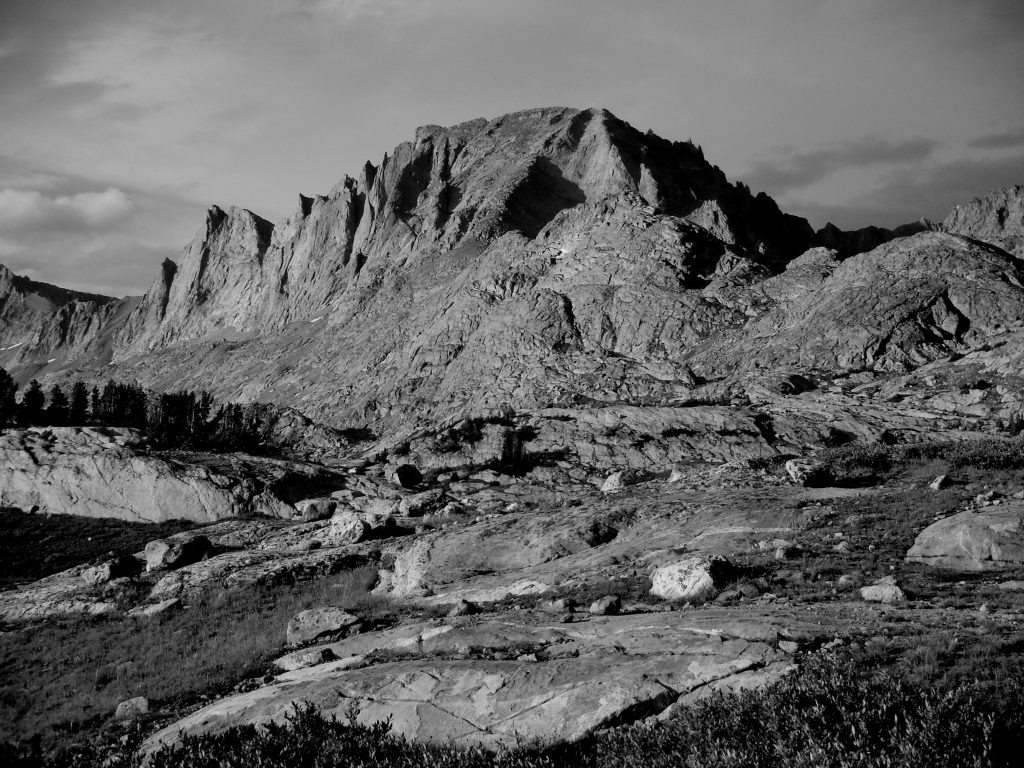 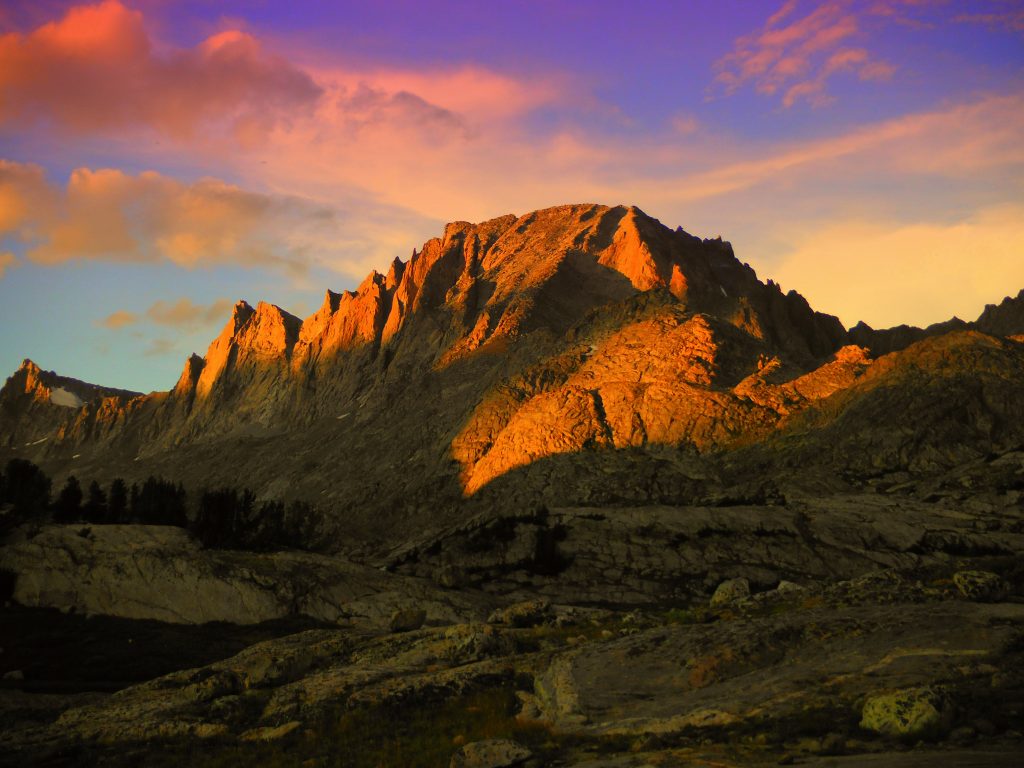