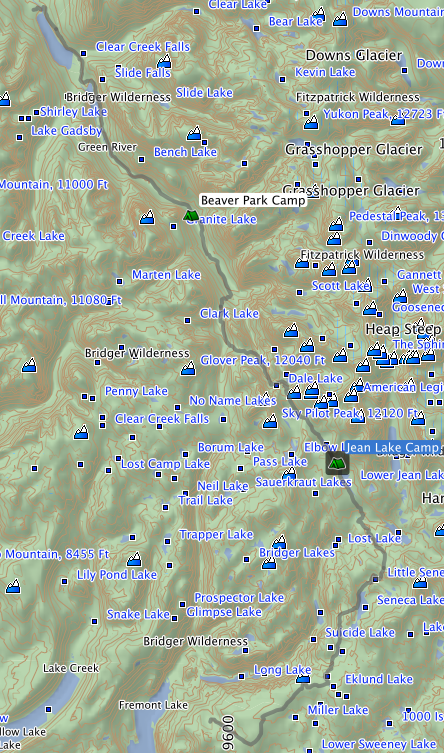 First, and foremost, allow me a brief Author disclaimer in my mom voice. DO NOT HIKE ON BROKEN ANKLES. If what happened to me on this trip happens to you on this, or any, trip, for heaven’s sake, turn around and hike out. Don’t, like me, continue on stubbornly. Okay? Good.

This was planned with my friend Karen. It was to be the last trip of the season and we wanted to go out with a bang, so we figured we’d head up and do a through-hike for a change. We arranged for a car shuttle through the Great Outdoor Transportation Company, and we set off. With a car shuttle, it allows us the best possible use of our time in the mountains. Here’s how it worked: We dropped off a spare key on our way out of town. We drove to Elkhart Park and began our hike. Sometime, during our hike, a shuttle driver went up to Elkhart, got our car, and drove it to Green River Lakes where it happily awaited us. The drivers for the Great Outdoor Shop will generally leave a vehicle at Point A for a day or so in case one needs to backtrack out due to illness or injury, which is a great idea…for those who backtrack out instead of stubbornly forcing on into a death march. Convenient, eh? You should book a shuttle here too.

So, we had our shuttle booked, the weather looked fantastic, and we were so psyched to do this trip. We started hiking, with our goal to camp between Upper and Lower Jean Lakes. We had just passed Photographer’s Point and were heading toward the Eklund Lake area and hiking pretty quickly when, in the midst of a totally ridiculous conversation, my right foot hit a tree root and decided to spin around on itself while making an incredible cracking sound. Now, I’m pretty much the most naturally graceless person you’re likely to meet. I fall down A LOT. I know what broken bones feel like because I’ve broken a lot of them. This was broken. Karen was like, “I heard that!” as she helped me to sit on a nearby rock. I stripped off my pack and sat for a second. Mostly I was really angry that this had happened. Karen was saying that we should turn around, that we should go back. I told her no, that it was probably just a sprain. Her face is something I will probably never get over. I wasn’t fooling her for a second, and she pursed her lips and shook her head. “We’re only 5 miles in; we should turn back now,” she said. I was busy taking off my shoe and sock and replied, “We’re only 5 miles in; we’re not turning back. It’s just a sprain.” With that, I grabbed my trekking poles because I always keep a large amount of duct tape wrapped around them for precisely this reason, and began to tightly wrap my foot and ankle with duct tape. In my mind I knew that my ankle was broken. I also knew that I would be able to walk on it, having had broken ankles before. I knew that if we went out, the doctor would tell me that my ankle was broken, would immobilize it, and send me home in a walking cast anyway. So, I made a duct tape bootie, put my sock back on, put my shoe back on and yanked the laces as tight as I could make them. I put on my pack, and started hiking again. I wasn’t even limping. Karen followed, albeit reluctantly, and we picked up our conversation where we had left off. Aside from relying a bit more on my trekking poles, I still maintained a fast pace and we made our way.

At Fremont Crossing, we stopped for a break (no pun intended). We re-evaluated the map and still decided that we would head for the Jean Lakes area to camp. Due to my gimped up nature, we weren’t moving as quickly as we had hoped, but we were still making excellent time. Karen was still nervous about me hiking, but I felt great! In fact, my foot was totally numb by now so there was no pain at all. We kept moving. 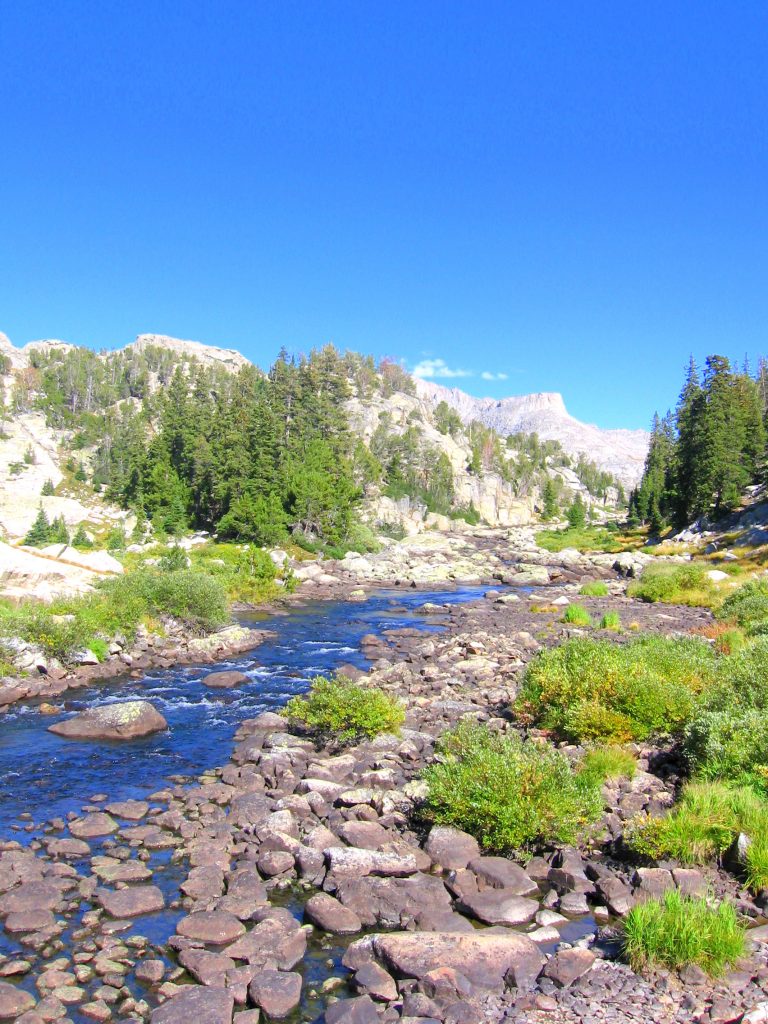 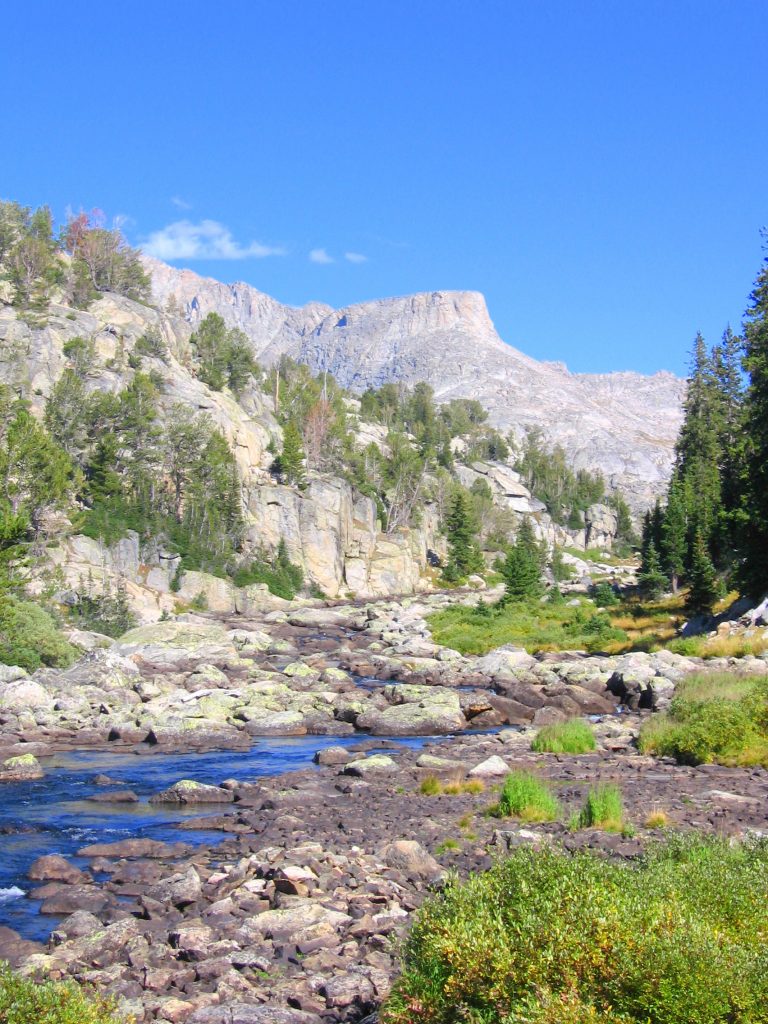 We got to the Jean Lakes about an hour later than we originally anticipated, but we got there. We set up camp, ate some dinner, and wandered into the tent. I took off my sock and elevated my foot under my backpack. After relaxing for a bit, I decided that I would remove the tape boot for the night and replace it in the morning. When I removed the tape, the swelling that I had been keeping out all day bubbled down my leg into my foot. It was really weird and really, really gross. No bruising had set in yet, but my ankle got to be about baseball-sized in a matter of 5 minutes. Karen was freaking. I was just like, “Whatever; I’m going to sleep.” And I slept great. 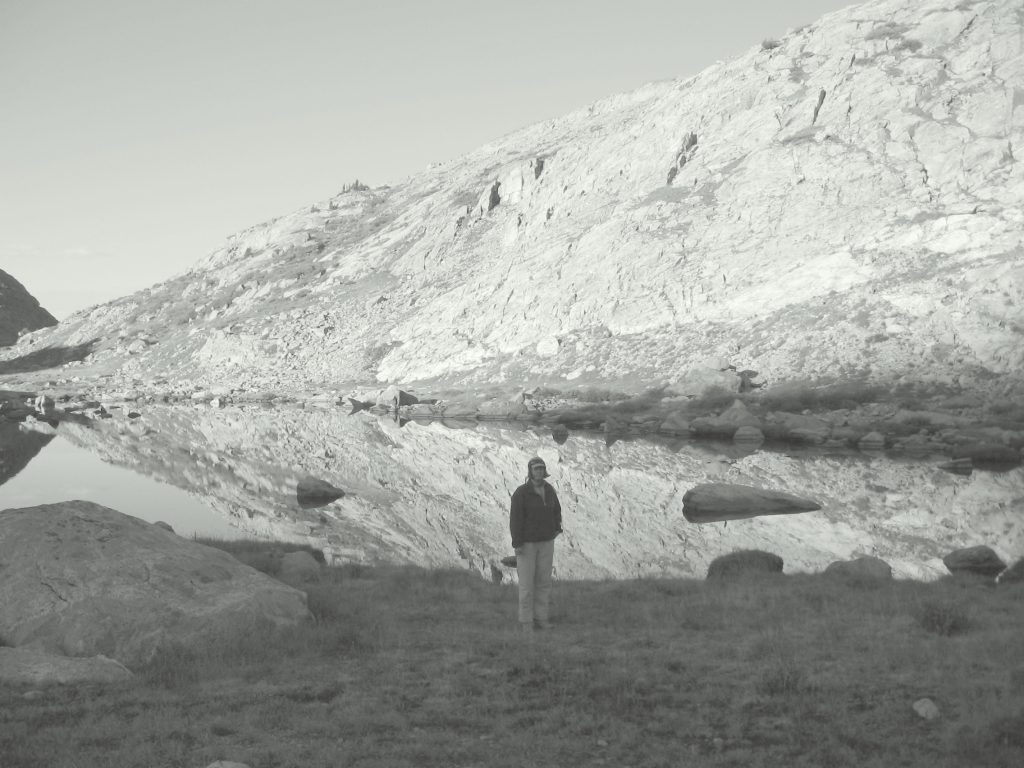 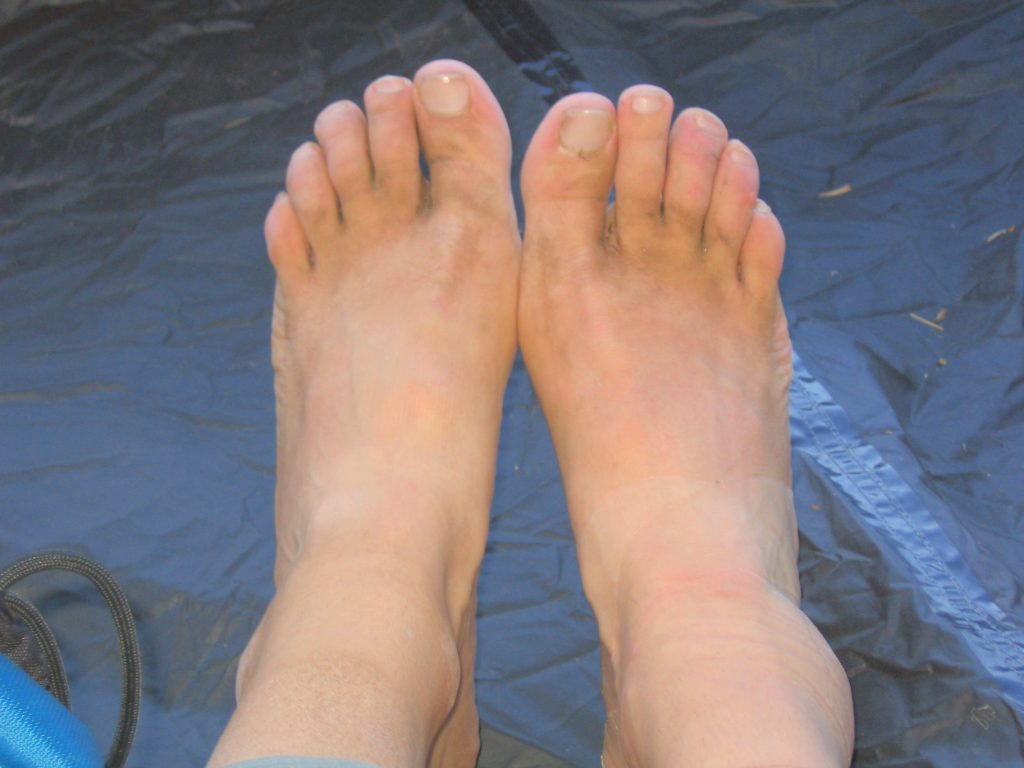 The next morning I hobbled around camp for a bit before re-taping my ankle. We left the beautiful camp at Jean Lakes and made our way to the Shannon Pass/Cube Rock Pass Trail. The Shannon Pass/Cube Rock Pass trail is not maintained by the USFS so it may not appear on some maps. However, it is a legitimately used trail, and while navigating can be a challenge in certain areas, as long as you have your wits about you, you should come out just fine. This section of trail itself offers stunning views of the Green River Lake valley, and it passes by Stroud Glacier and Peak Lake, which is where the Green River gets its start. 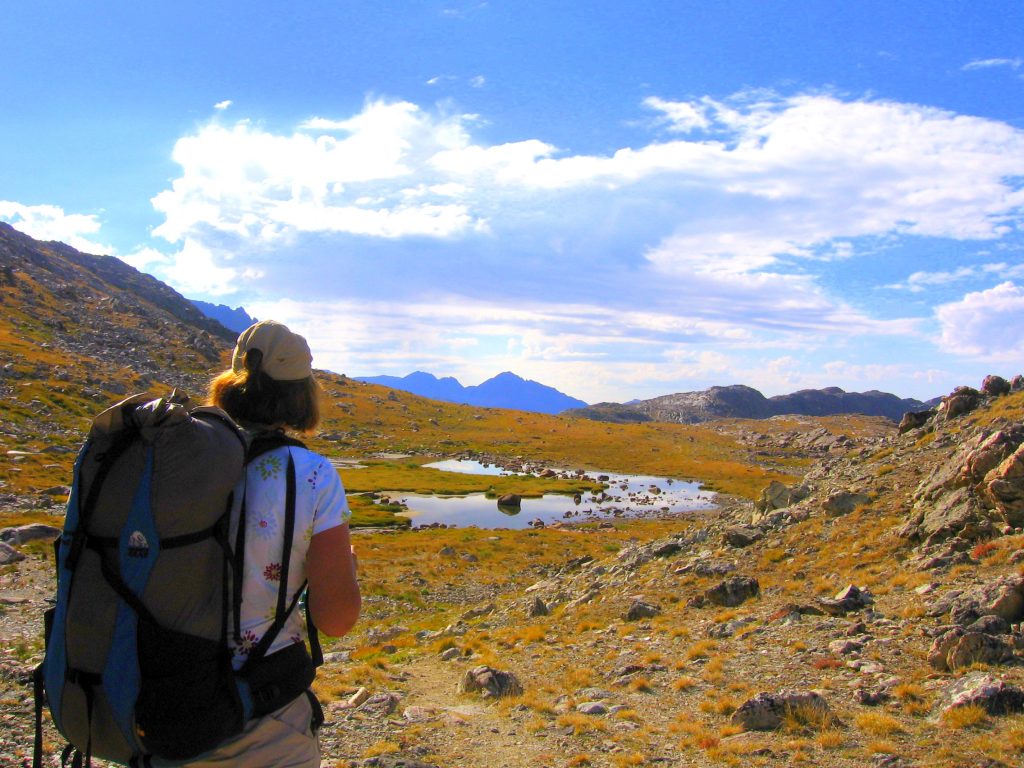 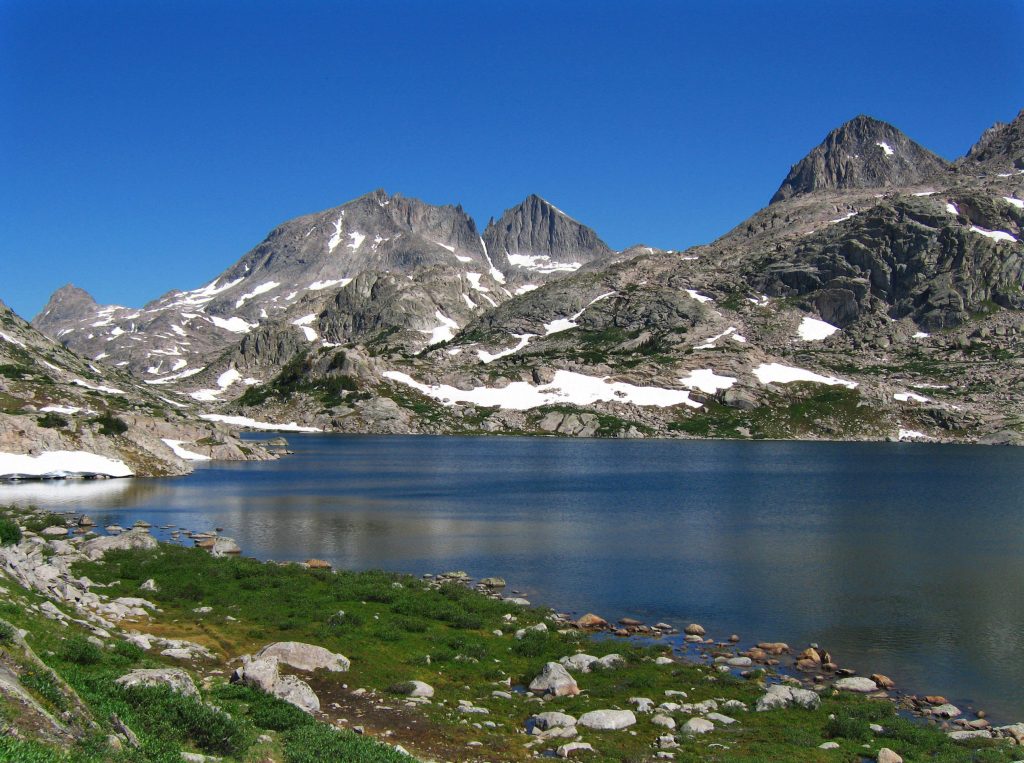 Shannon Pass is pretty grassy and the trail meanders uphill right beside Stroud Peak. When you reach the Cube Rock Pass trail it is abruptly rocky, and you become surrounded by refrigerator-sized boulders as far as the eye can see. There are quite a few unnamed tarns dotting the maze between the boulders. 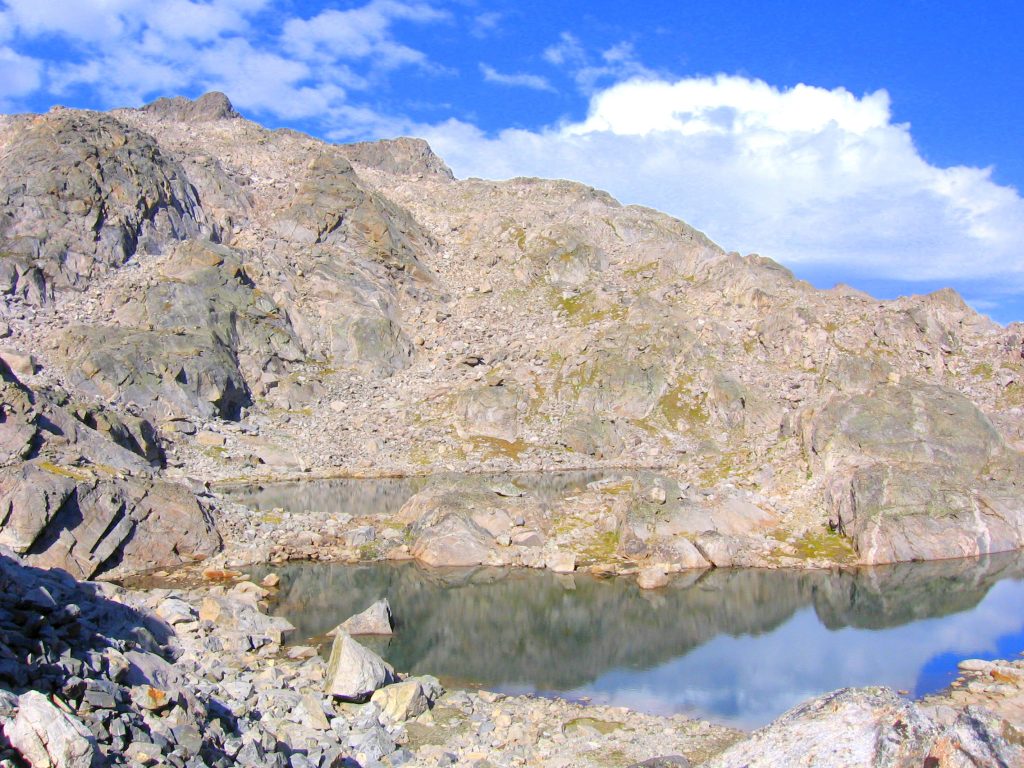 After winding down some steep alleyways that weave in and out of high boulder hallways, you pop out suddenly at Peak Lake, which is located at the very base of Stroud Peak. This beauty is hard to capture on camera because the sheer enormity of it and of Stroud are dwarfed in photographs. Just know that despite how tiny they may look in the following pictures, they are both domineering this landscape with their sizes. The storm clouds began to gather in earnest and we quickly made our descent to avoid the weather as long as possible. 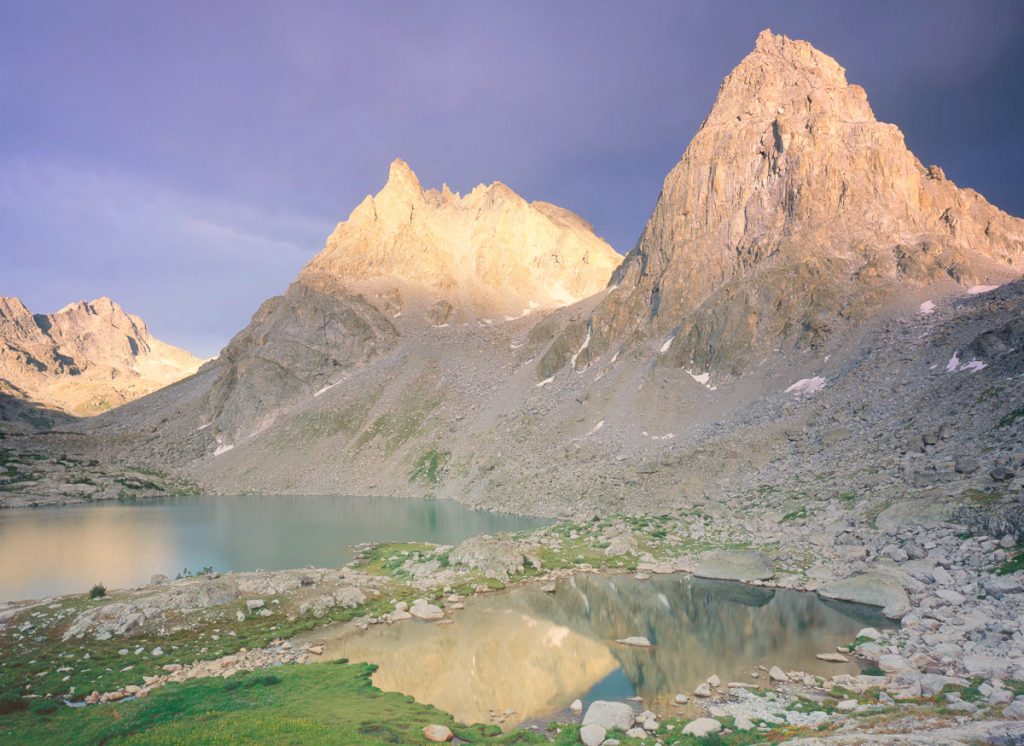 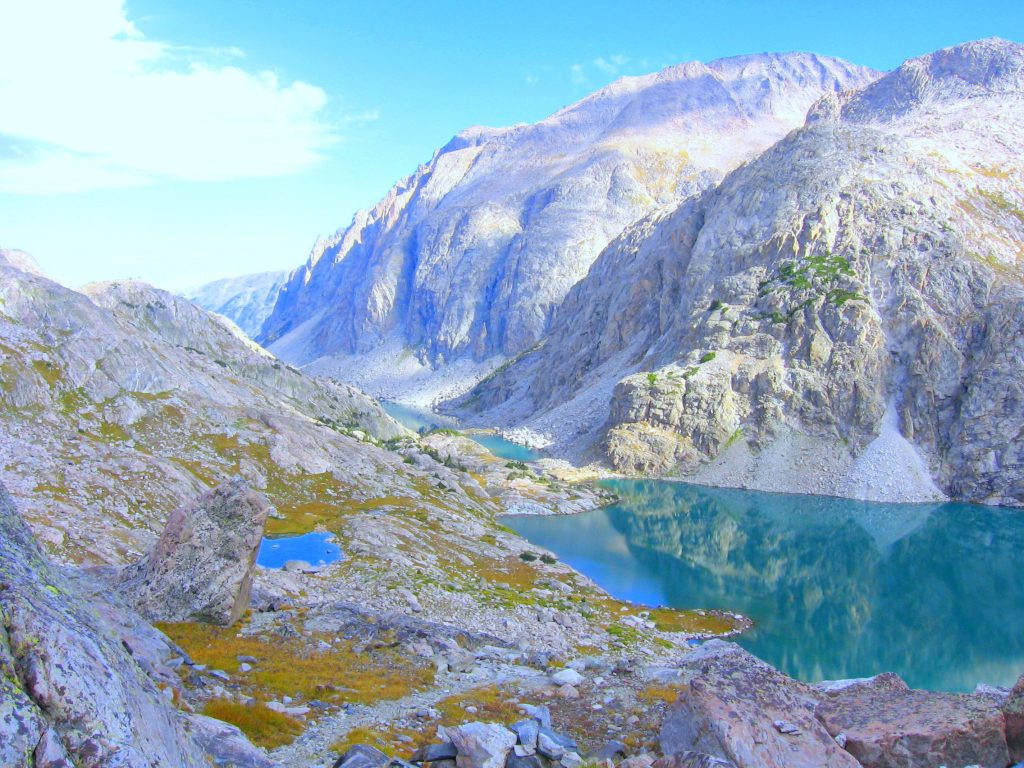 The trail connects up with Vista Pass and begins a very steep descent to Three Forks Park in the Green River Lakes valley. It’s not often that you are ready for the downhill sections to end, but on Vista Pass you are. I can only imagine that if you did this hike in reverse, you would just get cranky going up Vista Pass. It’s an eternity.

We passed through Three Forks Park and made camp for the night at Beaver Park….after Karen fell in the river and lost one of her trekking poles. (This is why you use the straps, folks)

On day three, we hiked out from Beaver Park to the trailhead. The most exciting thing that happened was that it rained almost the entire day. I was moving a bit slower because I gave one of my trekking poles to Karen so she could have a pair and I gimped along with just one. By this point in time my ankle and all of my toes were black with bruising and the swelling was showing signs of going absolutely nowhere. I think both of us felt more than a little banged up after this trip, but the scenery out of Green River Lakes just keeps you going.

It was on this trip that I decided that my next summit would be Squaretop. It is such an iconic peak in the Wind River Range, and so I added that to my list. 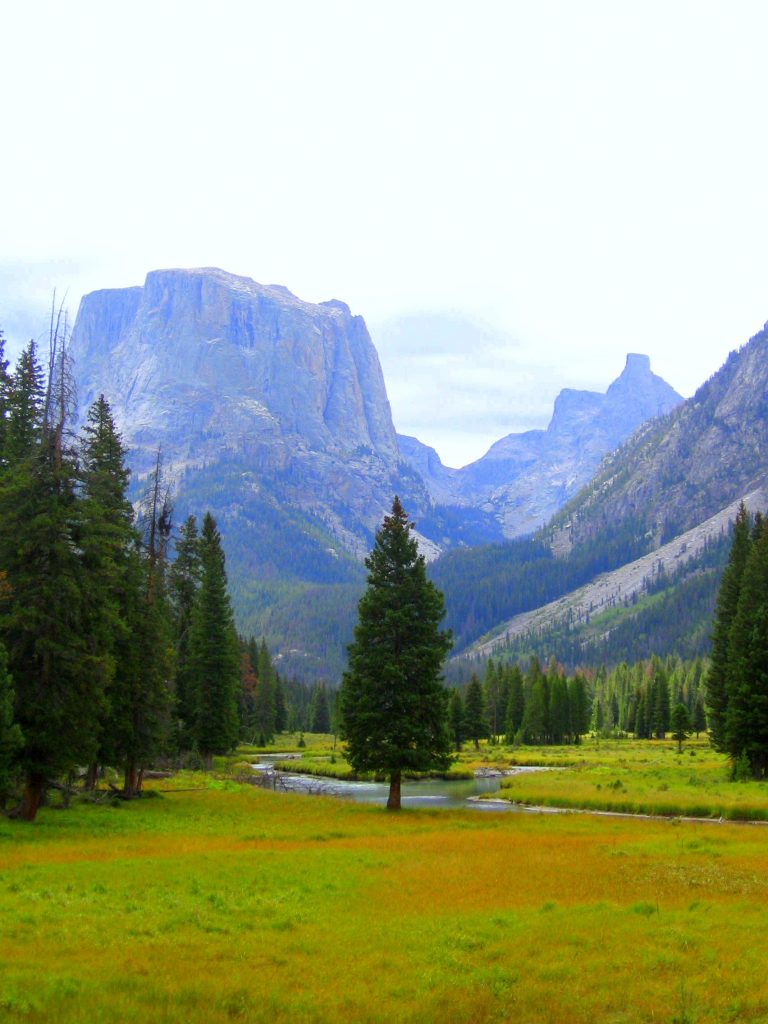 But first, I had to heal. We made it back to the car and began the bumpy ride back home. Karen asked me if I was going to head to the doctor to have my ankle looked at. I just said, “Nah, I already know that it’s broken.” She just looked at me (remember how I kept telling her that it was just a sprain?) and finally just laughed and laughed.

Be safe out there, and don’t be stubborn; if you’re injured in the backcountry, get help!