Books and Maps can be purchased here.

First and foremost, this trip started initially as an attempt to summit Gannett Peak from the Green River Lakes Trailhead. Josh and I had some time together in late September and decided to shake things up a bit. Typically, Gannett is accessed via Titcomb Basin ,and typically before mid-August.  There are certainly some reasons for this.  Firstly, and to be a bit braggy on our home base, there is no reason to miss Titcomb Basin.  Ever.  I know that I have gushed on Titcomb Basin before, but seriously, if you have the opportunity, go see it.  My clumsy words certainly cannot adequately describe it, and no photo I have seen effectively does it justice.

Mid-August is a perfect summit time for Gannett because there is still a snow bridge, which means you have less boulder-hopping.  It does mean hauling your crampons and your ice axe in for 20 miles, but in my opinion, anything beats boulder-hopping.

Josh and I made plans to access Gannett Peak from the rarely used Tourist Creek drainage.  Of the options available to us on this side of the range, the Tourist Creek drainage is the shortest option, albeit not the most frequently utilized.  The plan was to hike up to Scott Lake on day 1, summit Gannett via Minor Glacier, head back to Scott Lake, pick up camp and move down to Three Forks Park on day 2.  Hike out on day 3. Note that since our original plan failed and we switched to a summit of Squaretop Mountain instead, I have listed the appropriate mileage and map for a Squaretop ascent only.

From Three Forks Park, our path was pretty clear.  It didn’t exactly look incredible, but at least we could see it. 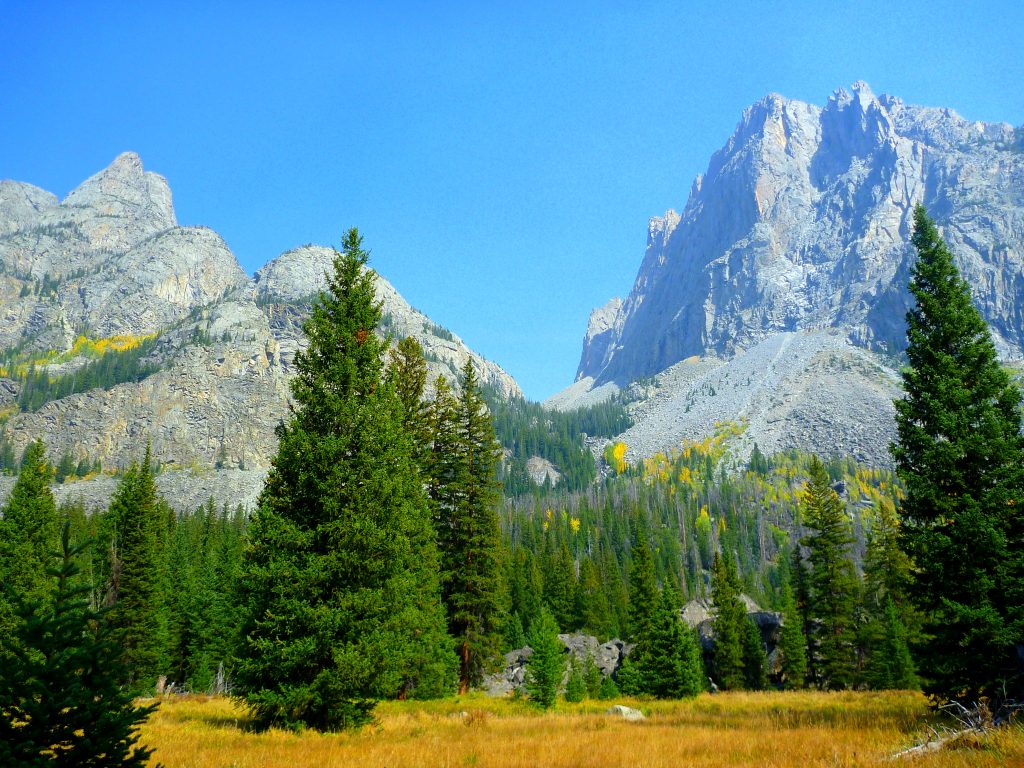 Now, we all remember the time I broke myself on a hike in the backcountry. (Read my account of hiking the Northern Half of the Winds for a description of that treat). We all know that I’m the clumsy one. I’m the one who fell at Arrowhead Lake and really messed up my psoas 9 miles into the backcountry.  I’m the one who is the expert at walking with crutches, or who can write legibly with my left hand, even though I’m right-handed.  I’m the one with the messed up knee that now bends backward, and whose hips go all out of alignment once a year.  I’m the one who winces in cold water because of the pain it shoots through my several-times broken toes and ankles.  My balance is awful, and I can walk across a flat, stable surface and find something to trip on.  Seriously.  I’m a freaking mess.  Bearing that in mind, boulder-hopping is a pretty treacherous thing for me to do in my spare time.  We all know this.

So, here we are, on this skeeeettttchhhhyyyy pass up the Tourist Creek drainage.  Guess what it is?  You got it.  A GIANT boulder field.  3 miles of steep, never traveled, avalanche-chute-to-the-max boulder field, lined at the bottom with pricker bushes.  Welcome to my personal hell on earth.  We’re ascending this awful cliff-band of horror and I’m sending piles of rocks sliding down about every 200 feet.  This is not reassuring.  It is also frustrating.  I don’t get how Josh, who outweighs me by a solid 25 pounds (not even counting the fact that his pack outweighed mine by at least that amount as well) is nimbly skipping along this scree field of death like a freaking mountain goat prancing along after the lollipop fairies while I’m lagging behind him by a quarter-mile, wading through rock up to my shins and sending boulders the size of Volkswagens flying down the mountainside with my every step, muttering nonsensical words I made up out of stress and wiping sweat off of my forehead.  After the seventh time this happened I called it quits.  I couldn’t see how I could possibly make it back down when I was avalanching the rocks going up the hillside.  Plus, at 12 miles in on this terrain, not even I wanted to risk breaking myself and needing to be rescued.

Hence, we hauled partway down the Tourist Creek Drainage and made camp for the night. Josh knows that boulder fields and I don’t mix well, so he didn’t seem too disappointed when I made the decision to turn around. He knows that I’m not a quitter and I’m not a coward, and that when I say that I’m done, I’m truly done.

The next morning, as dawn broke over the peaks surrounding us, we ate breakfast and made plans for the day.  It was decided that we would hike down the actual riverbed drainage in hopes of avoiding death by boulder field (me) and head up the opposite side of the valley toward Squaretop Mountain and go for a summit of that instead.

The hike to Squaretop was not new for either of us.  It involves a burly ascent from the valley floor of Beaver Park to Granite Lake, where we planned on setting up our camp for the second night.  There is a trail to Granite Lake, but you will never find it on a map. Cutting across Beaver Park to the tree line you can generally find it pretty easily if you look at your map in relation to Granite Lake and your location within Beaver Park. Look for the trail; it’s miserable without it. We hauled up, set up the tent, dropped off most of our weight and ran toward the ascent of Squaretop so we would be back to camp before darkness fell.  Nothing sucks more than a peak descent via headlamp when there is no trail, lots of loose rocks and steep, uneven terrain.  Except maybe giant, scary boulder fields. 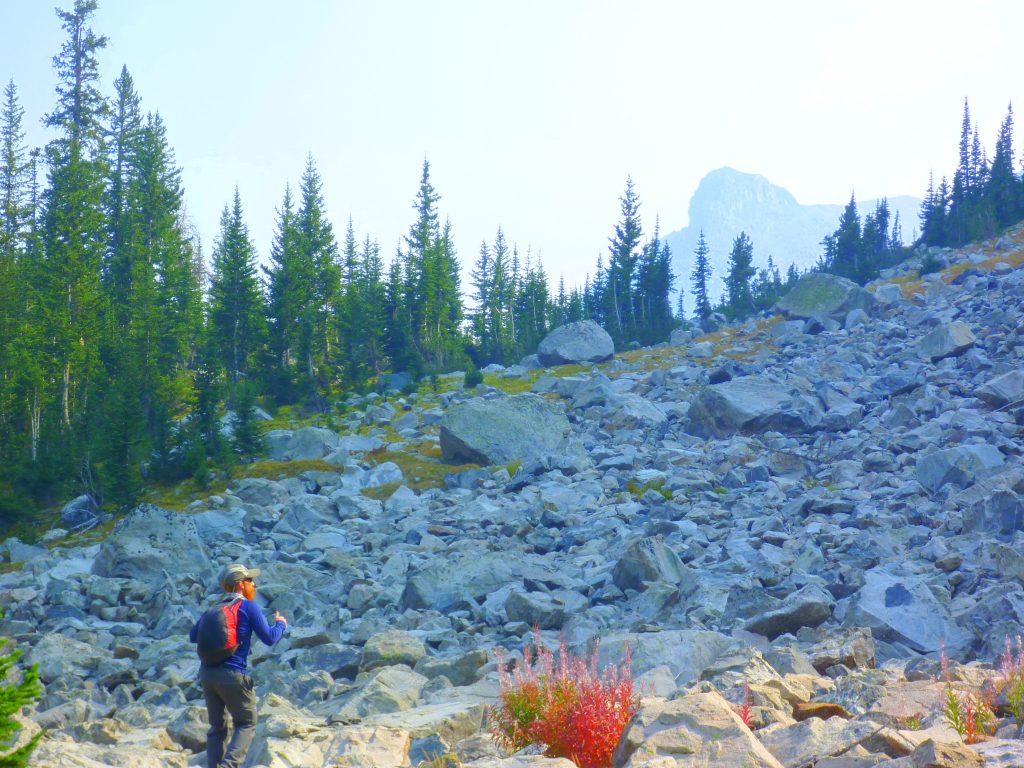 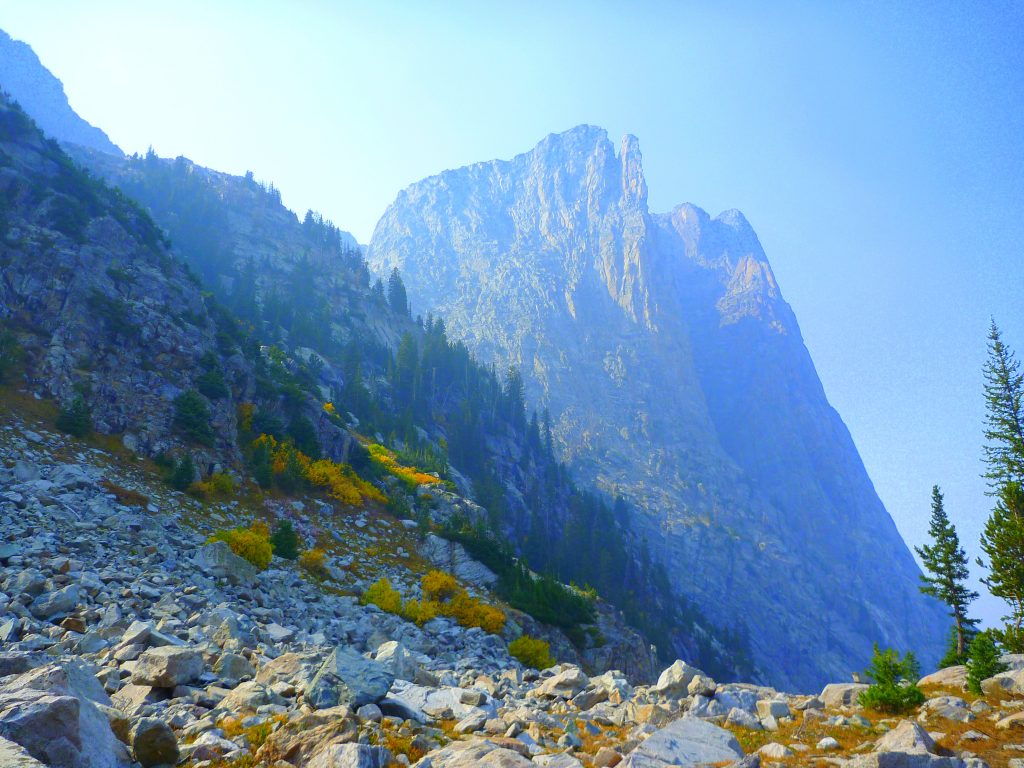 It took us 2 and a half hours to summit from Granite Lake, moving at a comfortable pace.  Squaretop Mountain is a fairly iconic peak in this area.  It is such an unusual mountain due to its defined shape and location.  Therefore, it makes sense that the summit would also be unusual.  The summit of Squaretop is like being on a football field lined with smooth, weathered boulders.  It is surrounded on all sides by the jagged peaks of its neighbors, and affords incredible views of the Green River valley and the Wind River Range itself.  It’s not the summit we were originally after, but I’m glad we did it. 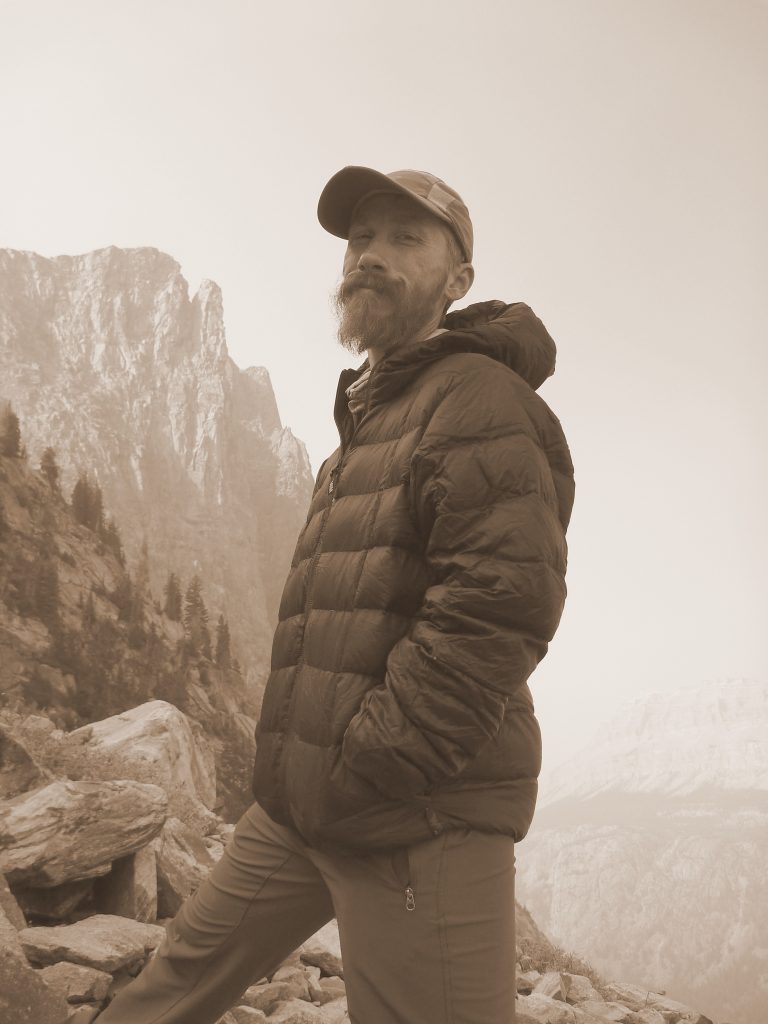 I would firstly really strongly, recommend actually buying the USGS topo map for this peak. It is renowned for being a very unintuitive summit, and since it is such a big mountain, the trail going up is variable and hard to follow. It is a good idea to have the more detailed topographic map with you so you can really see where you are in relation to the rest of the mountain. Many people get halfway up and give up because they cannot find the summit route, and it cannot be seen from a distance. You make your way up from the north drainage of Granite Lake and cut to the left to ascend a shelf up high. From the shelf, you hit a boulder field, but there is a trail winding through it. After the boulder field, you zig-zag your way up the grassy slopes to the summit, but you cannot see any more than about 100 feet ahead of your current position during the entire ascent. Therefore, it is a good idea to get it laid out on a topo map beforehand.

Unfortunately, there were wildfires in the area when we did this trip so the photos are not nearly as beautiful as they should be. The Wind River Range is also known for splendid bluebird skies much of the summer, but ours were pretty hazy due to smoke. Even still, the views were stunning from the summit. 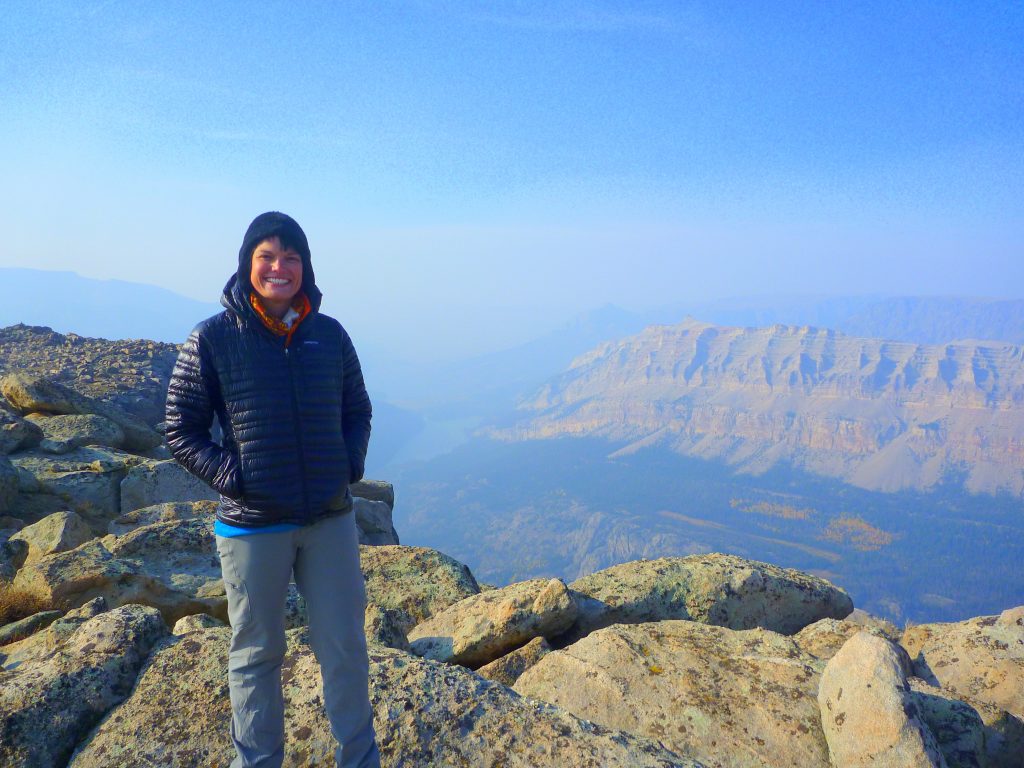 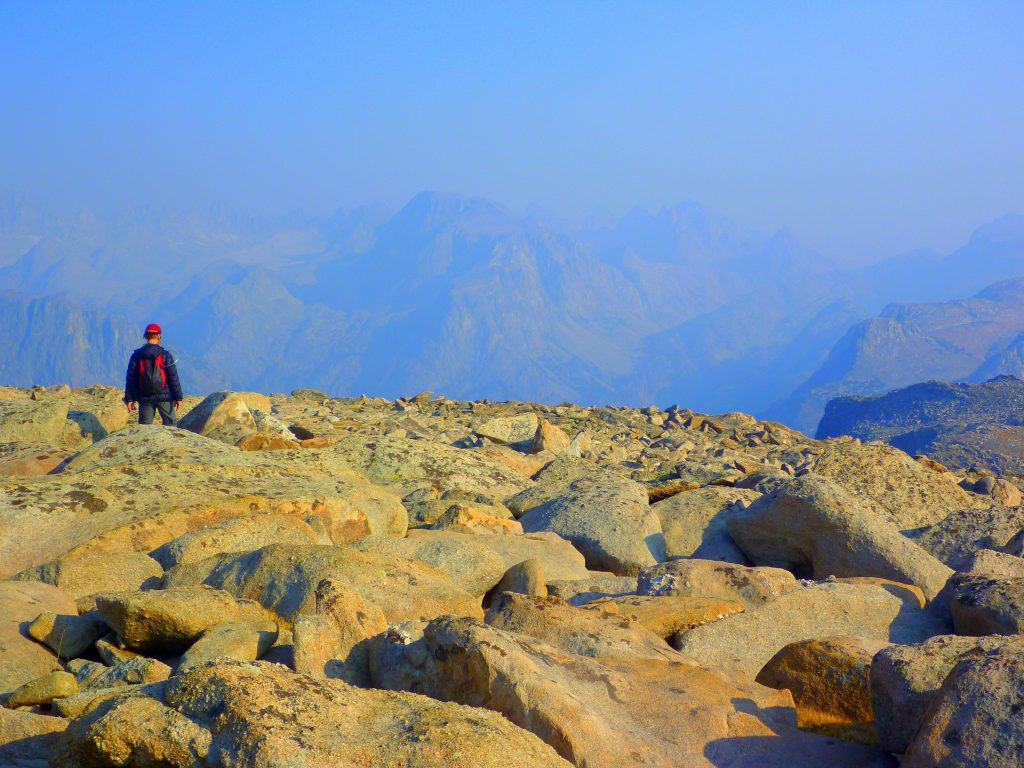 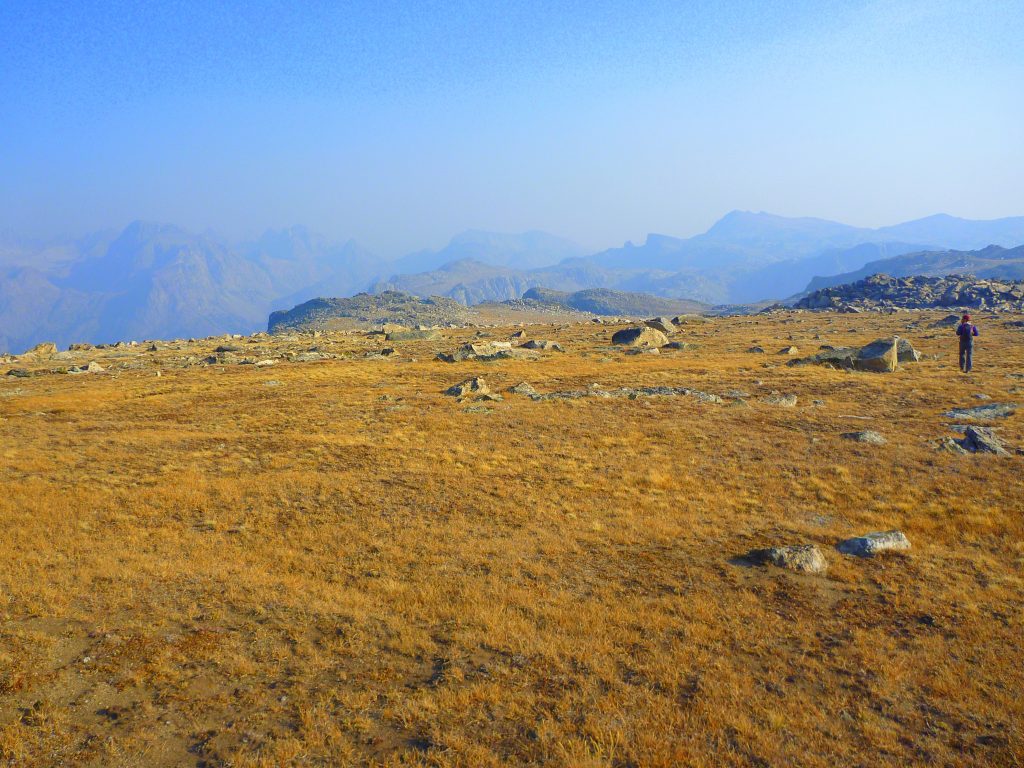 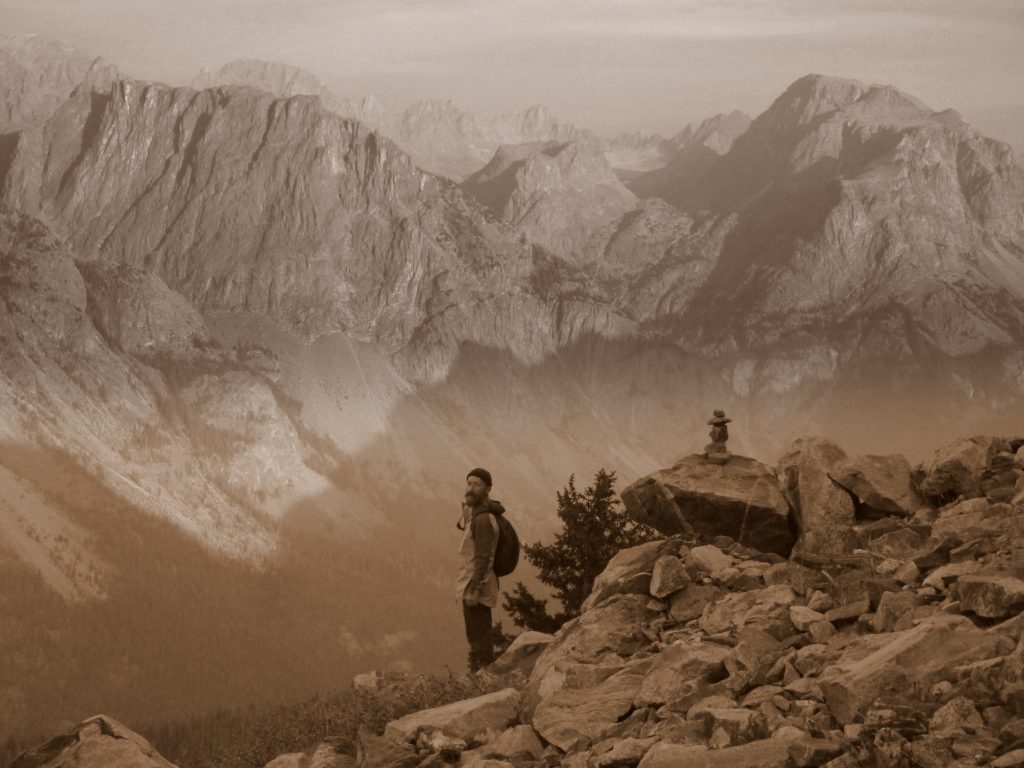 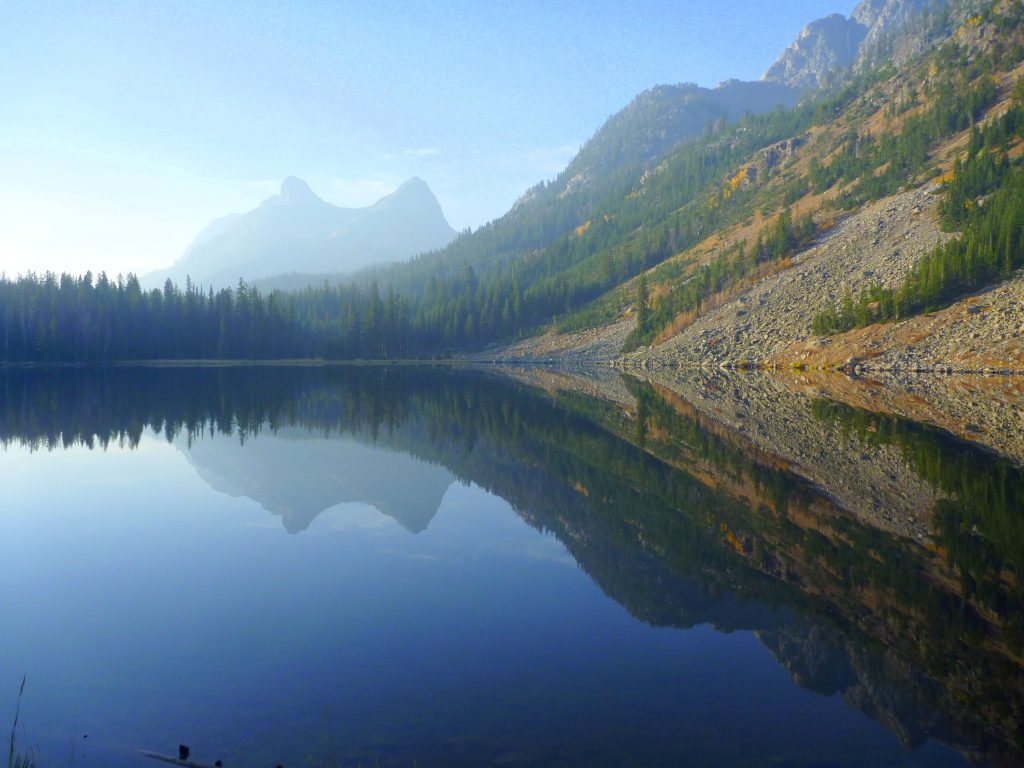 The hike out the next day was uneventful and beautiful because the aspens were changing into their autumn glory. The Wind River Range is a rainbow any time of year, but autumn is pretty tough to beat. 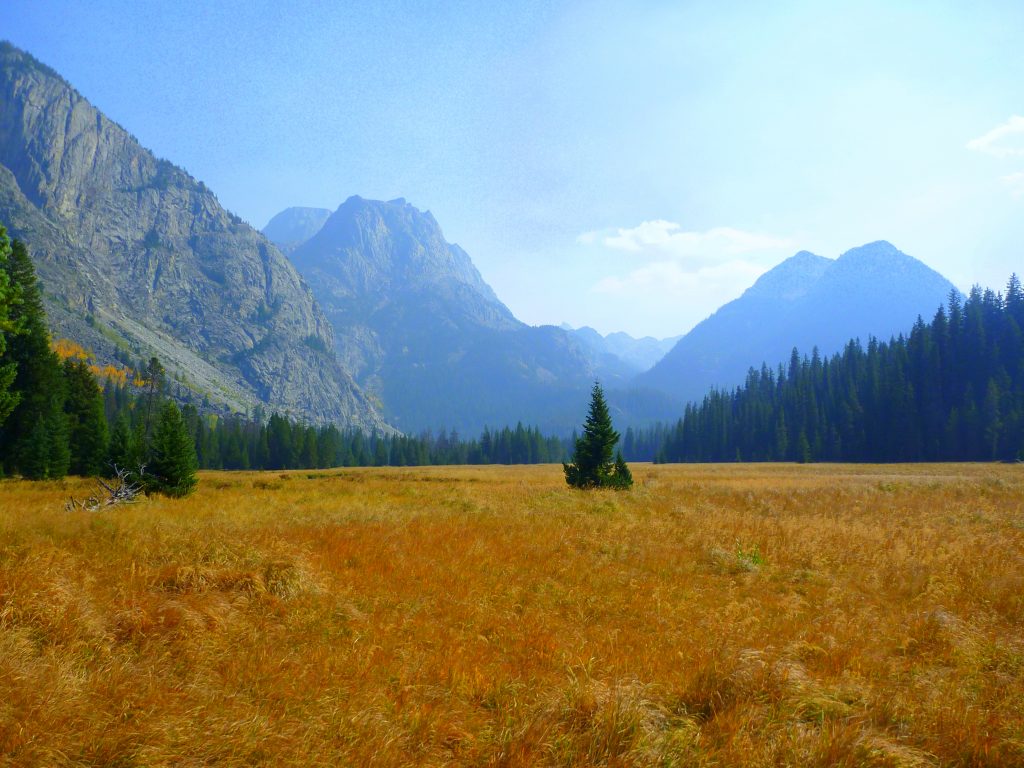 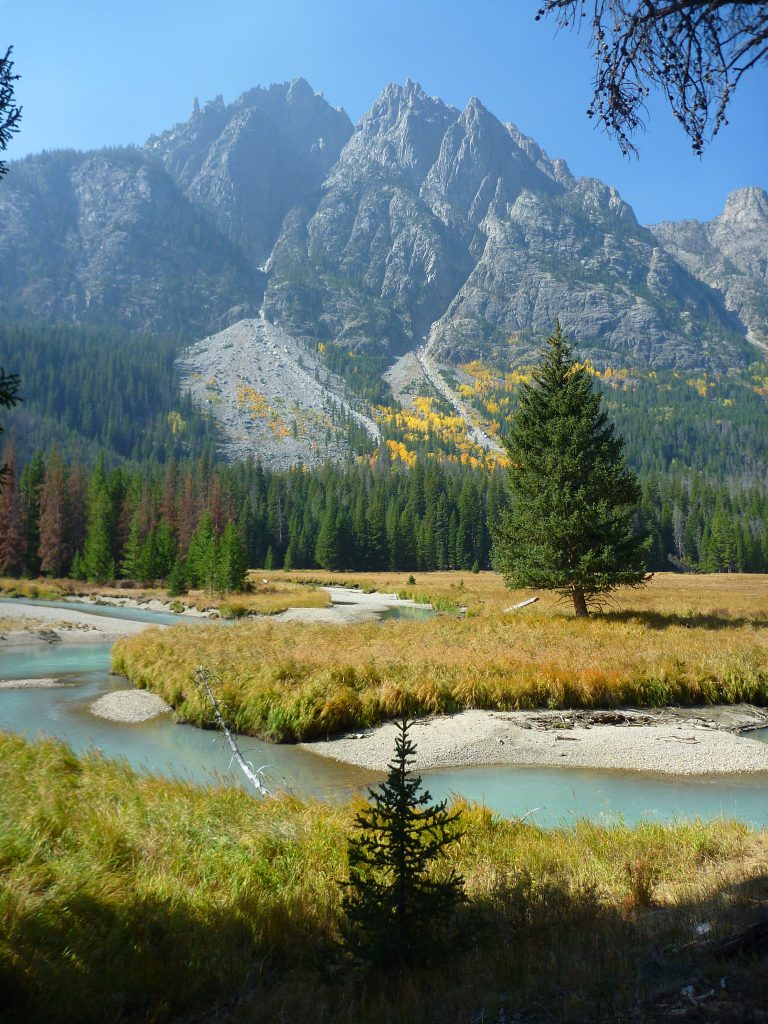 Again, it was not the summit we were originally after, but I’m glad we did it.  The important thing to us was being in the mountains together, experiencing our shared love of all things outdoors. In that, our mission was a success. Does it really matter which peak we summited? To us, the answer is no.  It wouldn’t have mattered if we just camped for the rest of the trip.  For us, the joy of being in the mountains is not hampered by success or failure at a driven goal.  There was no intent to conquer anything.  When you set out to conquer a peak, I feel like you are really only conquering your appreciation for all of the subtle differences the mountains offer.  I feel like you are objectifying something that is too majestic for words, and too ever-changing to label it with one, single-minded intent.  I feel like you are trying to win, rather than merely experiencing everything a mountain can be and mean to you, and eventually, what’s the point?  Escapism should not be reliant on winning or conquering anything.  It is a mindset, I am sorry to say, that seems to plague most people these days.  For me, my trips into the mountains are not proving my worth.  They are not showing the world how strong I am, or how motivated I am, or how light my backpack is, or how high my endurance level is.  For me, the mountains are my saving grace.  I feel like I should personally thank each and every one of them, for allowing me to unload my burdens upon them.  They are so good to me. 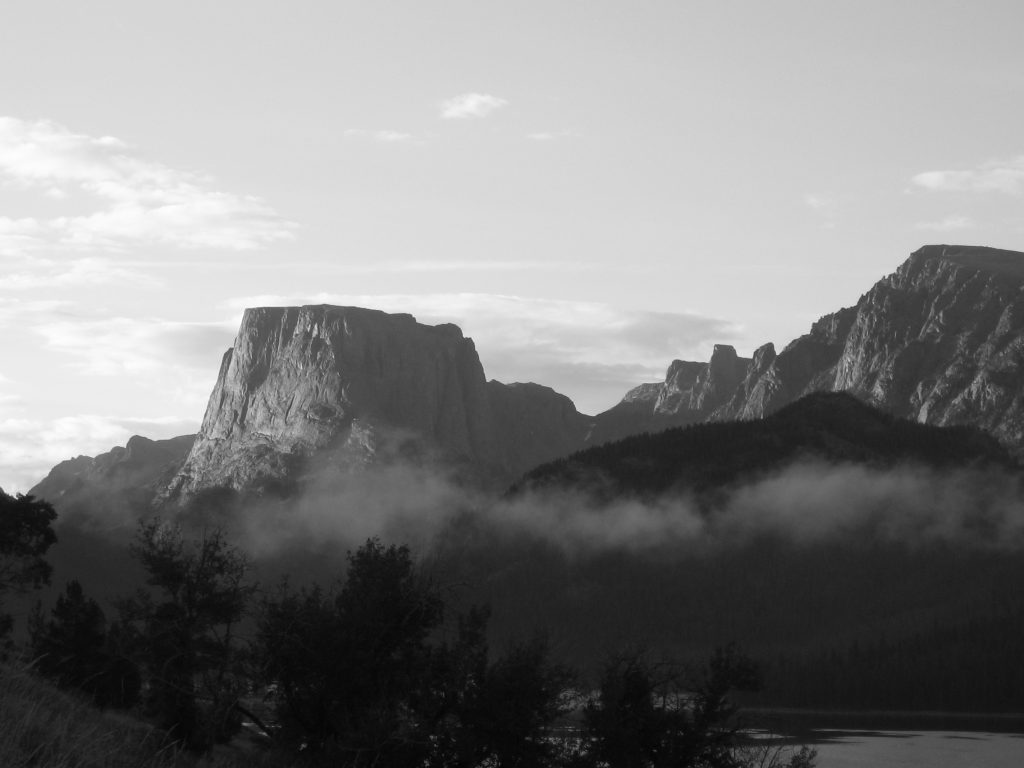