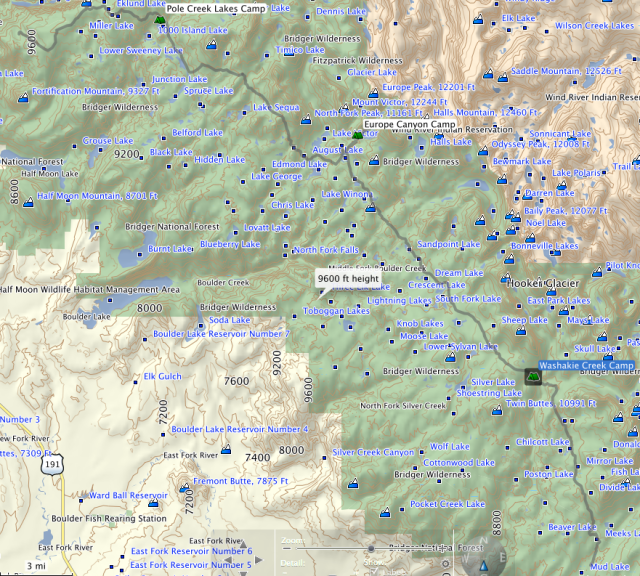 On June 1, 2012, Josh broke his shoulder while longboarding down from Elkhart Park Trailhead. It had been our first real day out for the season and he broke it after a day of climbing. After the relief of hearing a “no surgery” verdict, I made peace with the fact that our summer was going to be spent with the company of an arm sling. What can you do with a broken shoulder? Nothing.  You can’t wear a pack, you can’t ride a bike, you can’t really do anything but fish with a Tenkara rod that requires no reeling. Bummer. As you know, every June we get to do one big trip together while Sierra is visiting her grandparents in Nebraska. Due to Josh’s break I figured we’d play it by ear and see how he was feeling. We decided to do the Southern half of the Winds and see if we could fish a little. Because he couldn’t carry a traditional pack, we rigged up a pack to carry sling style, like a messenger bag. He carried his food, a water bottle, his Tenkara rod, and his flies, and I carried everything else. We set off on a Tuesday after work, figuring  we could at least get a head start on the hiking.

During this time period, there was a very large wildfire about 40 miles from Pinedale that pumped a lot of smoke into the sky. We started out in a pretty intimidating haze, but it got better the farther we hiked. 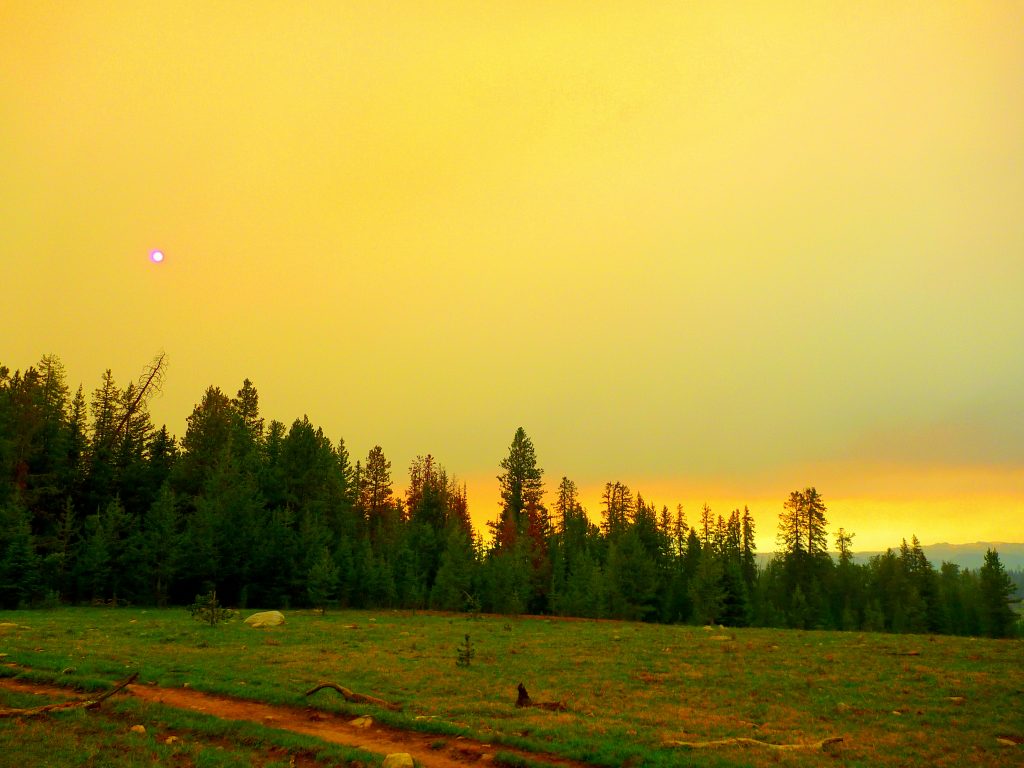 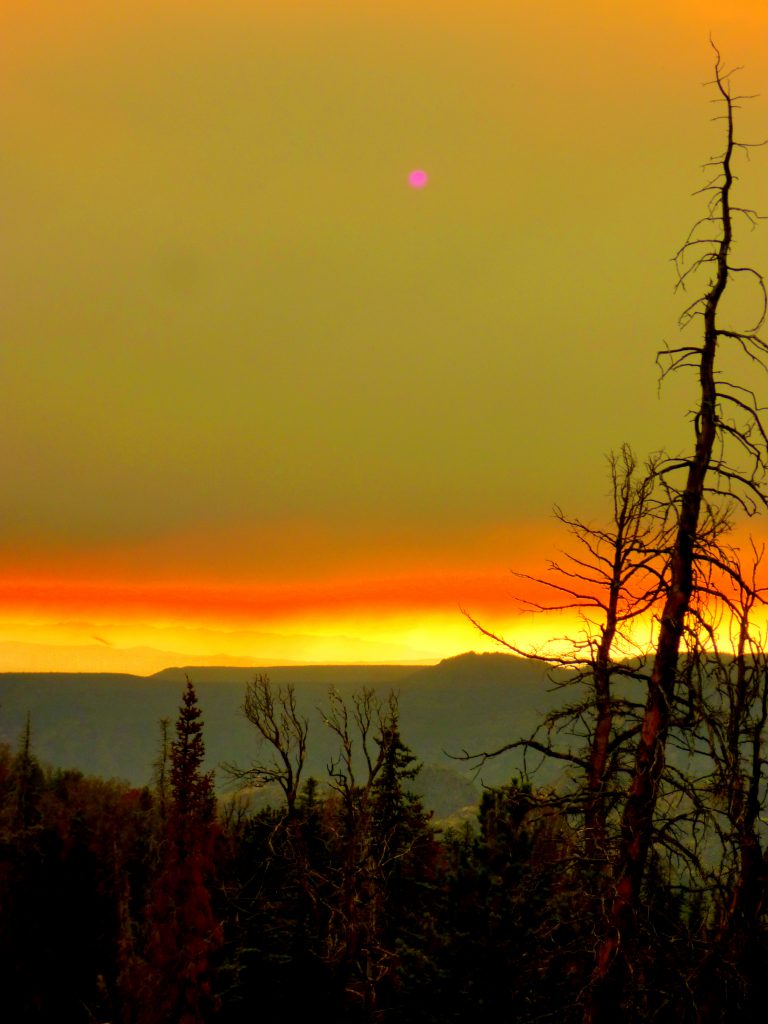 We made excellent time to Pole Creek Lakes and decided to make camp for the night and tackle the most troublesome river crossing in the morning. At least if you’re wet and cold at the beginning of the day you have time to warm up with the sun and the hiking, as opposed to being wet and cold at the end of the day and trying to boost your body heat back up when it’s dark and you’re in the tent. Due to it being the end of June, runoff was in full swing and we knew that the river crossings would be high. Looking at the map we figured this one would be the most problematical.

We couldn’t cross at the “normal” crossing zone because the water was too deep and too swift so we walked upriver for just a bit until we found a place where the water was no less deep, but way less swift. If you know me, you know that I HATE cold water. I hate it, I hate it, I hate it. It hurts my feet and it makes me feel sick and headachy and, above all, really, really angry. This river crossing was not warm. It was so not warm that it made me cry (I.don’t.cry.) while we were crossing. It was also very deep. It was so deep that the whole shoes-off-pants-rolled-up-to-the-knee scenario wasn’t going to cut it. We had to go for full lower-body nudity for this one, with the shirt hiked up a bit as well…nice. It was wide, deep, and absolutely frigid, but we made it. Pole Creek Lake, by extension was breathtakingly beautiful, and there was not a sliver of smoky sky to find. 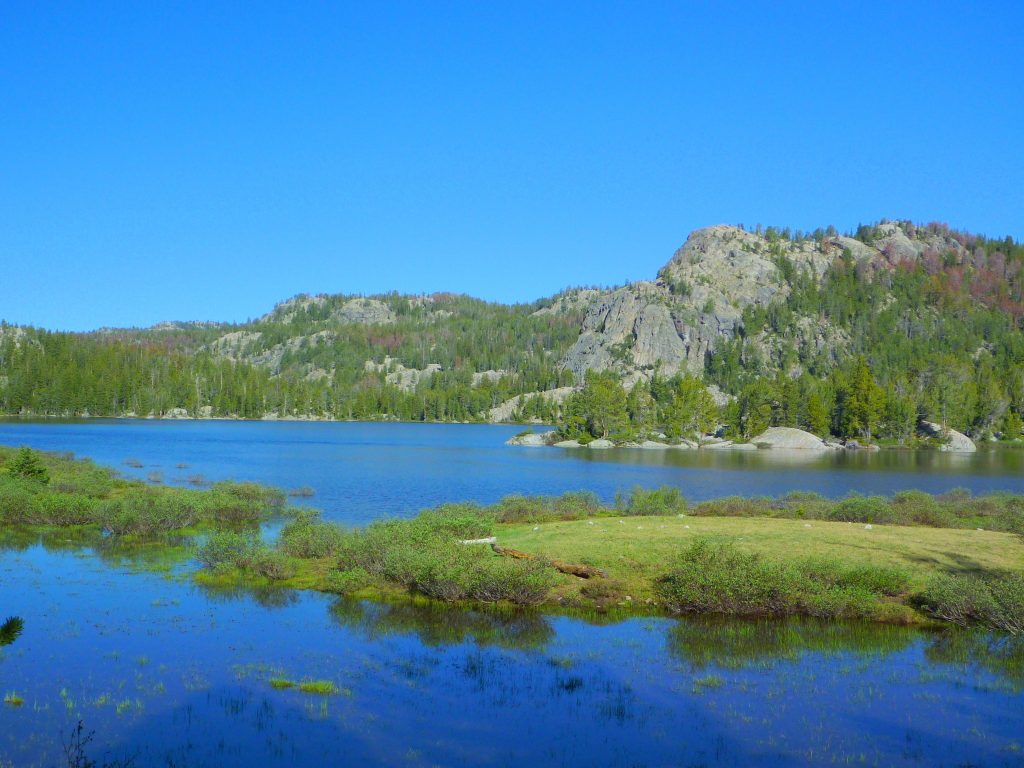 With runoff comes bad bugs, because there is so much extra water lying around. The mosquitos were terrible here. I had to put my buff up around my nose and mouth to keep from inhaling bugs. Also, I doused The Hat down with some deet to try and keep them away from my face. 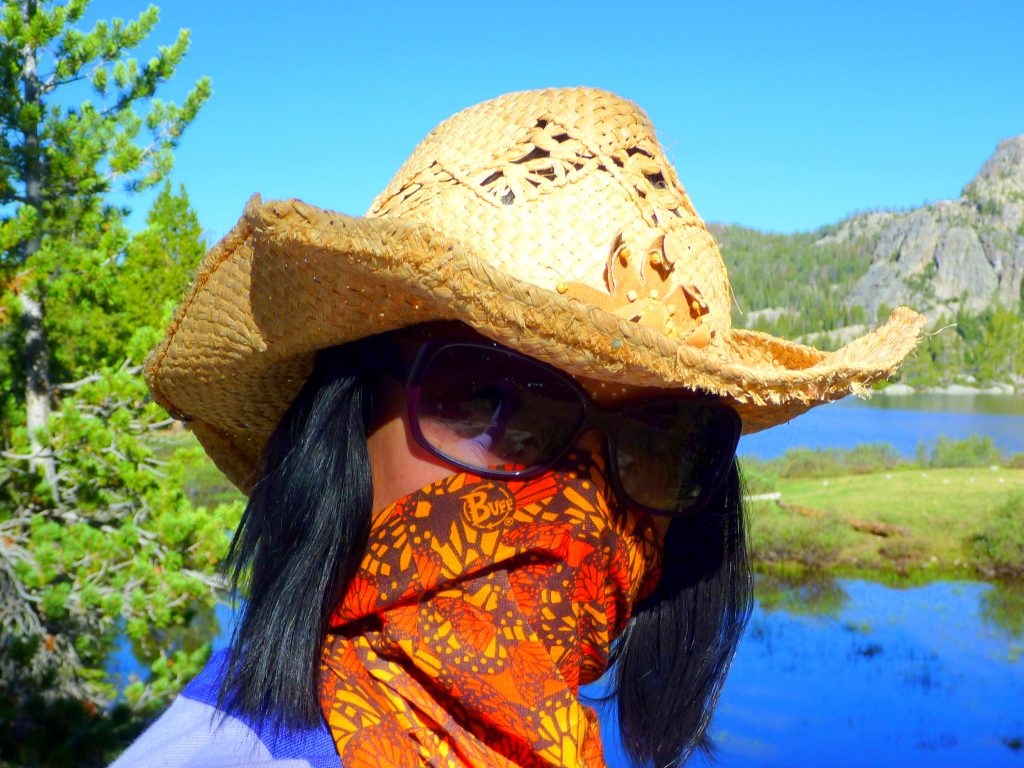 After Pole Creek Lakes we hiked for a couple of miles to Chain Lakes. We spotted stacks of Rainbow trout along the shoreline and drainages and decided to stop and toss a line. That’s one of the tradeoffs for mosquito season: bad bugs = excellent fishing. We each caught a few nice rainbows before packing up again and heading down the Bell Lakes Trail. 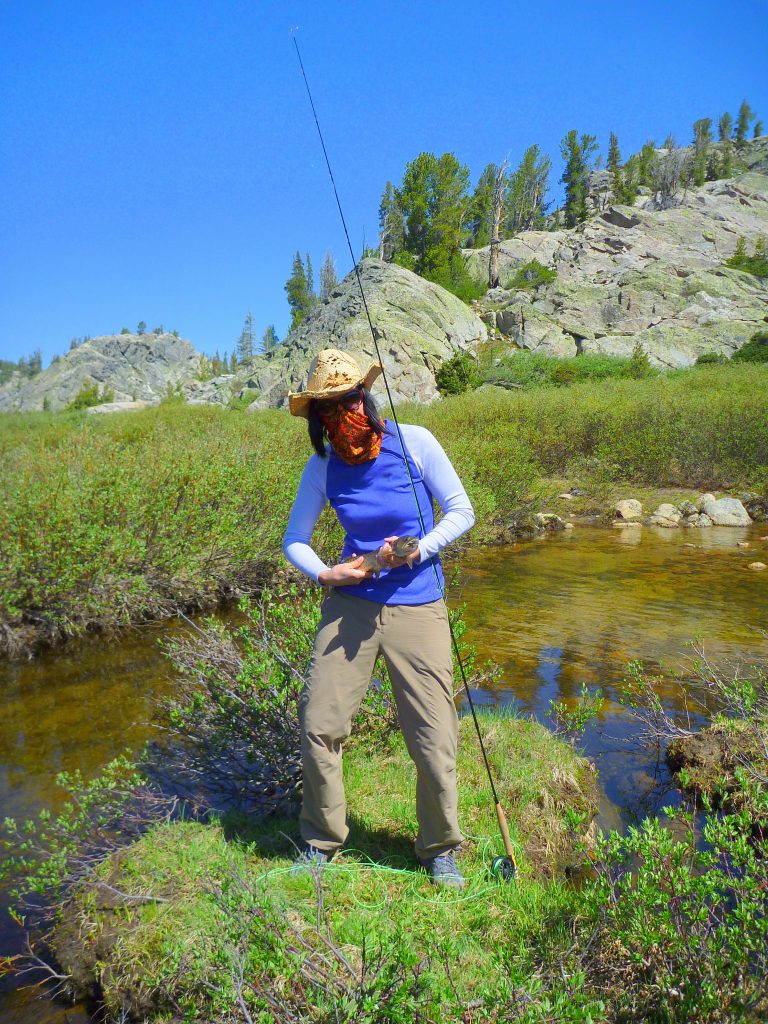 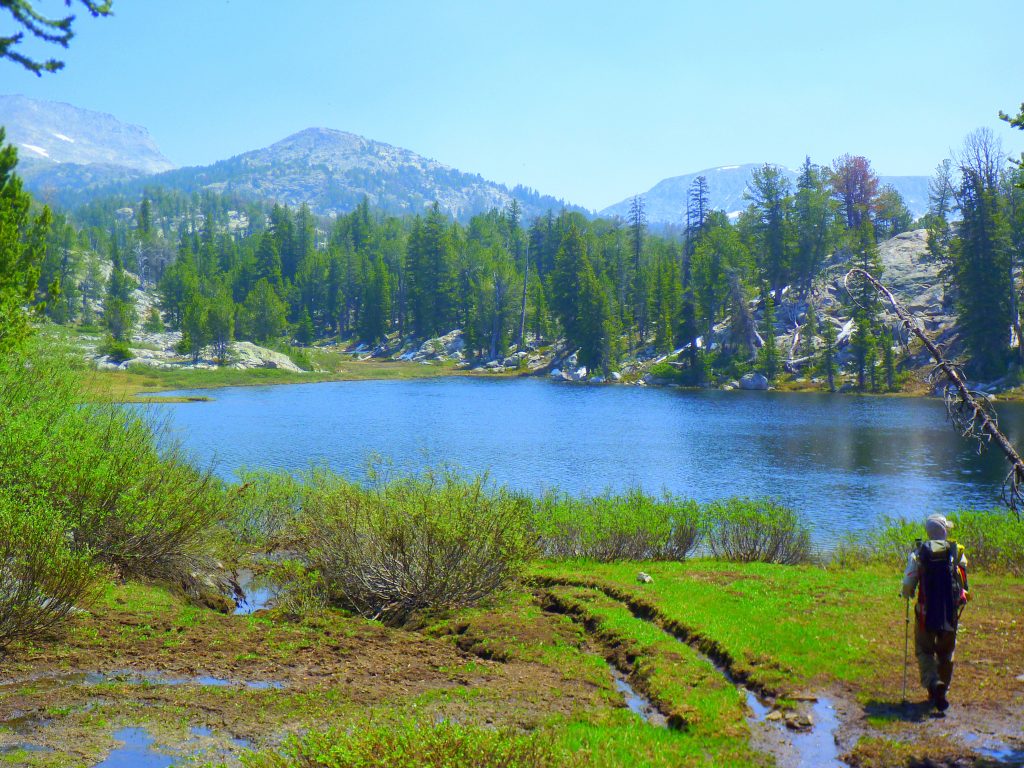 The Bell Lake trail breaks off of the Highline, so it is not widely used. It is mostly steep, forested terrain, and we took it as a cutacross toward Europe Canyon, where we hoped to spend the night. It was still snowy in a lot of places because of the tree cover, and we certainly didn’t see anyone on it. We didn’t see anyone for this entire day, actually.

What we did see, and actually saw for a while were these black bear tracks. This guy was pretty curious; we could hear him snuffling around our camp at night, but we never actually got a glimpse of him. He stayed pretty distant, but close enough to follow us for a day. Just curious, I suppose, but it’s a good heads up to remind you that this IS bear country and that the bears ARE around, even if you don’t see them all of the time. 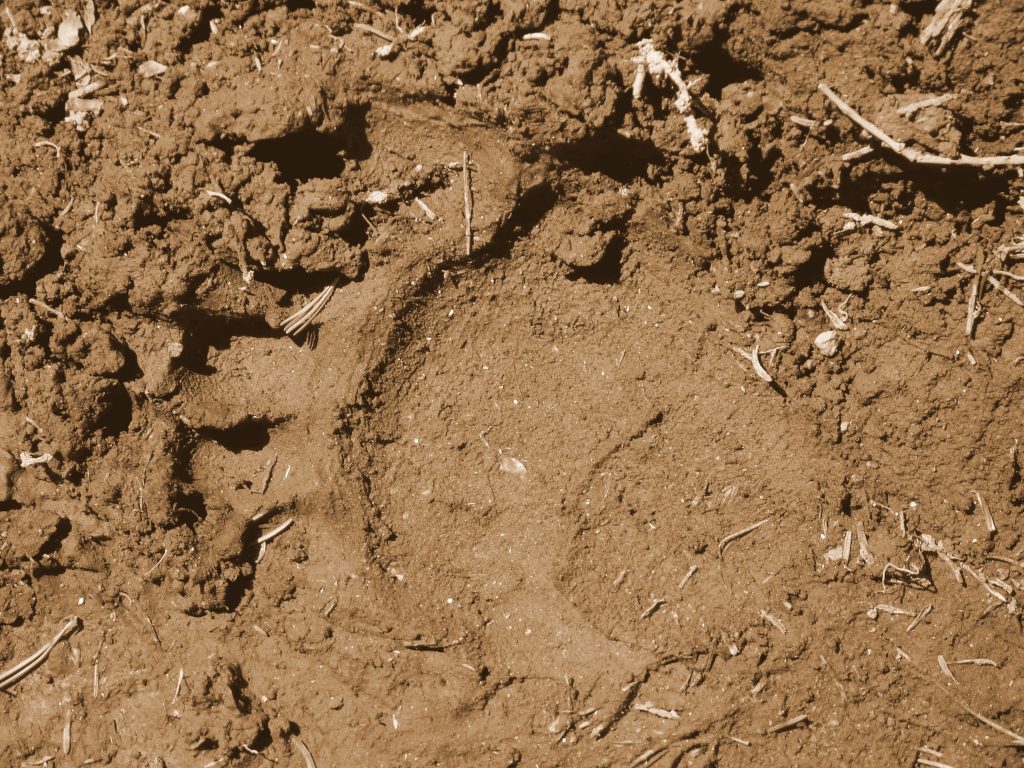 After the Bell Lake Trail reached its peak we came out on a high grassy meadow with some real mountain views around. Between the northern half of the range and the southern, I was surprised at how different the scenery was. The southern doesn’t offer as many big views as the northern; it is more forested and has more access to lakes and streams, but that means that you appreciate those rocky vistas even more. We decided to break for lunch in the sun, the breeze, and near a herd of elk happily grazing away. 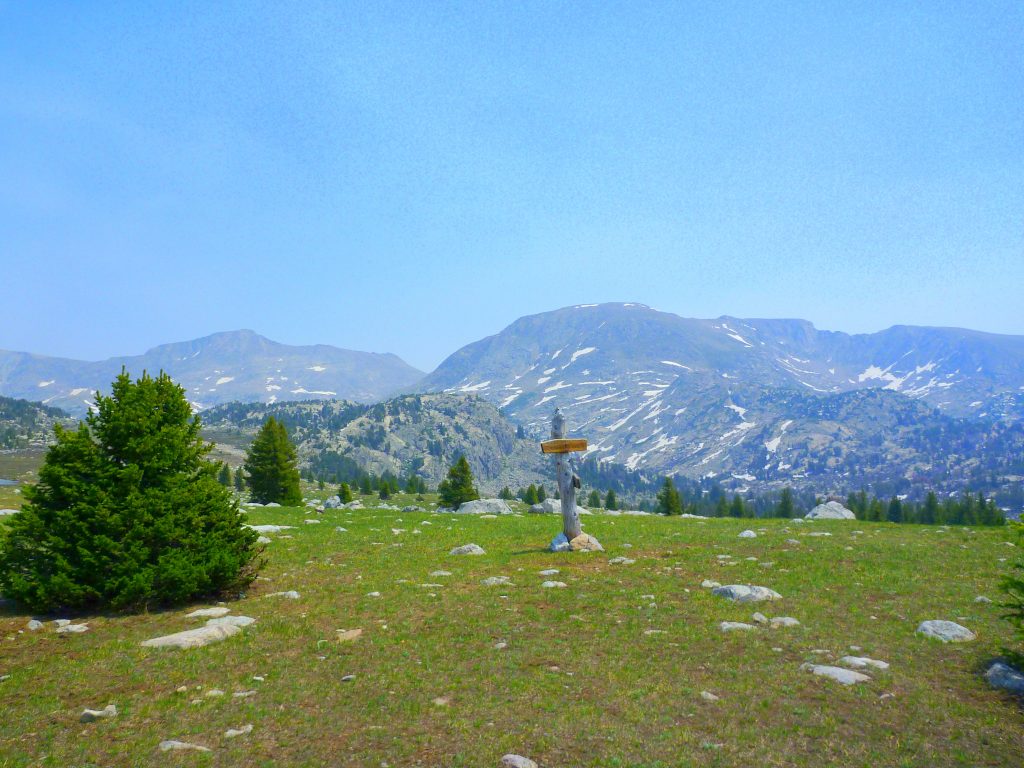 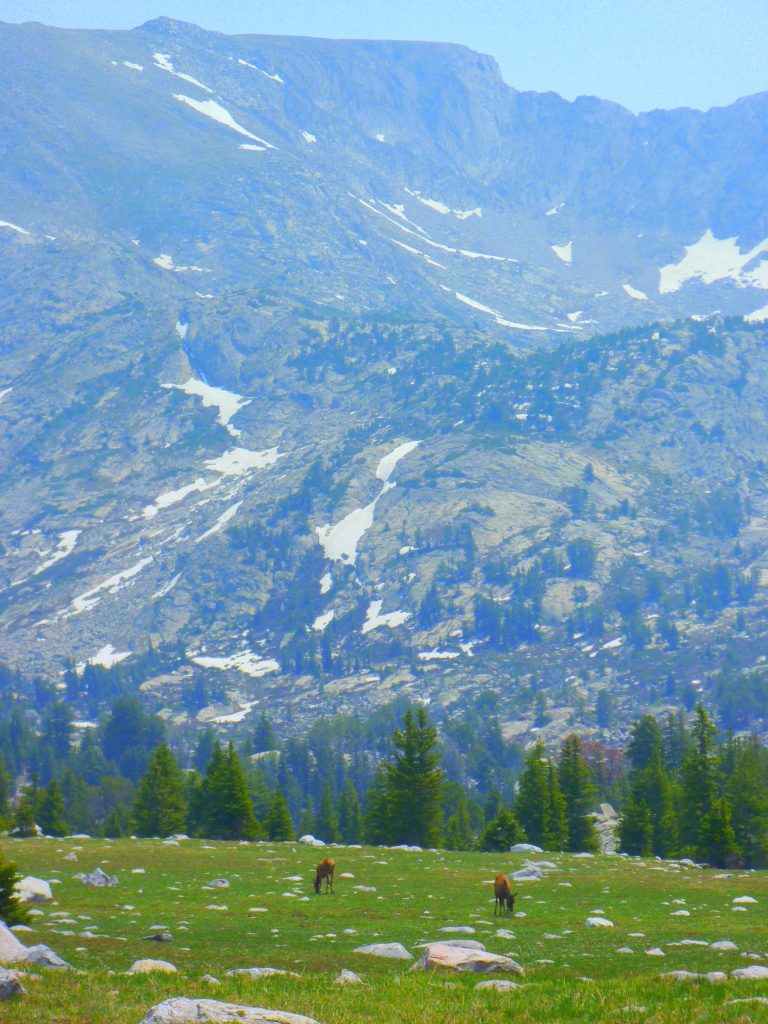 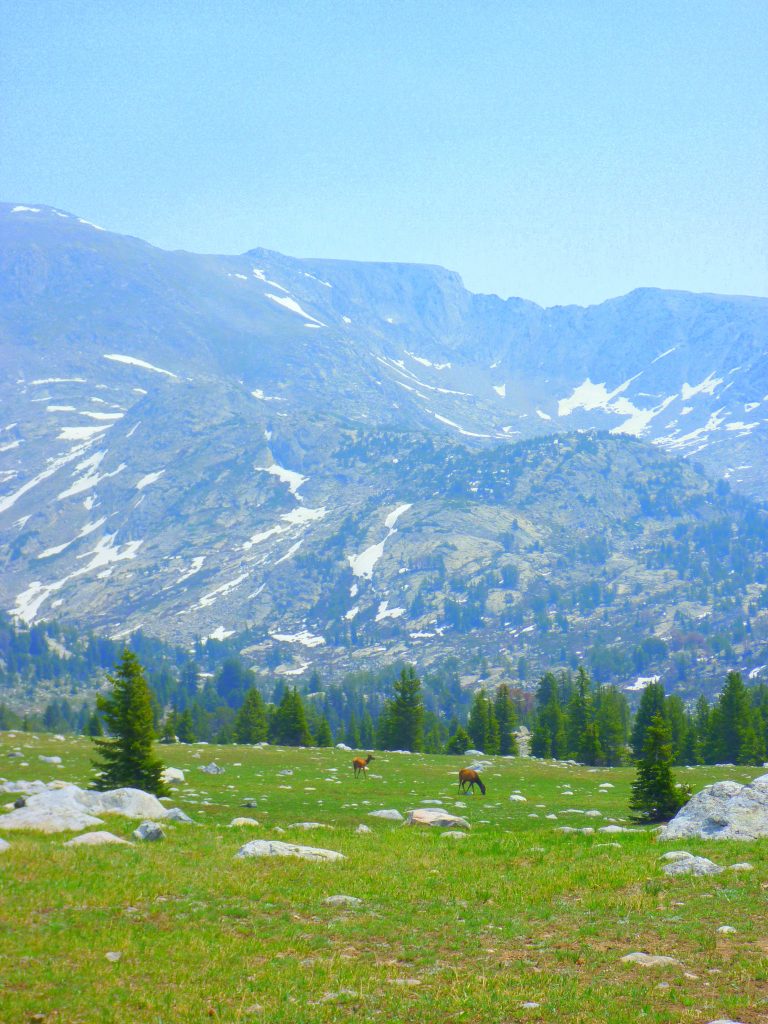 From here, we began to wind downhill toward another blasted stream crossing that took us to Hat Pass. This crossing was colder, but at least it was of the roll-up-your-pants variety, and no articles of clothing aside from socks and shoes needed to be shed. Hat Pass is a very open meadowy pass with waterfalls and the works, and the backside gives way to rocky, forested sections again. We noticed smoke beginning to descend upon us again and decided to make time toward Europe Canyon and our camp for the night. But…only after another strip-down-to-your-birthday-suit river crossing. I was beginning to get crabby about them by now. 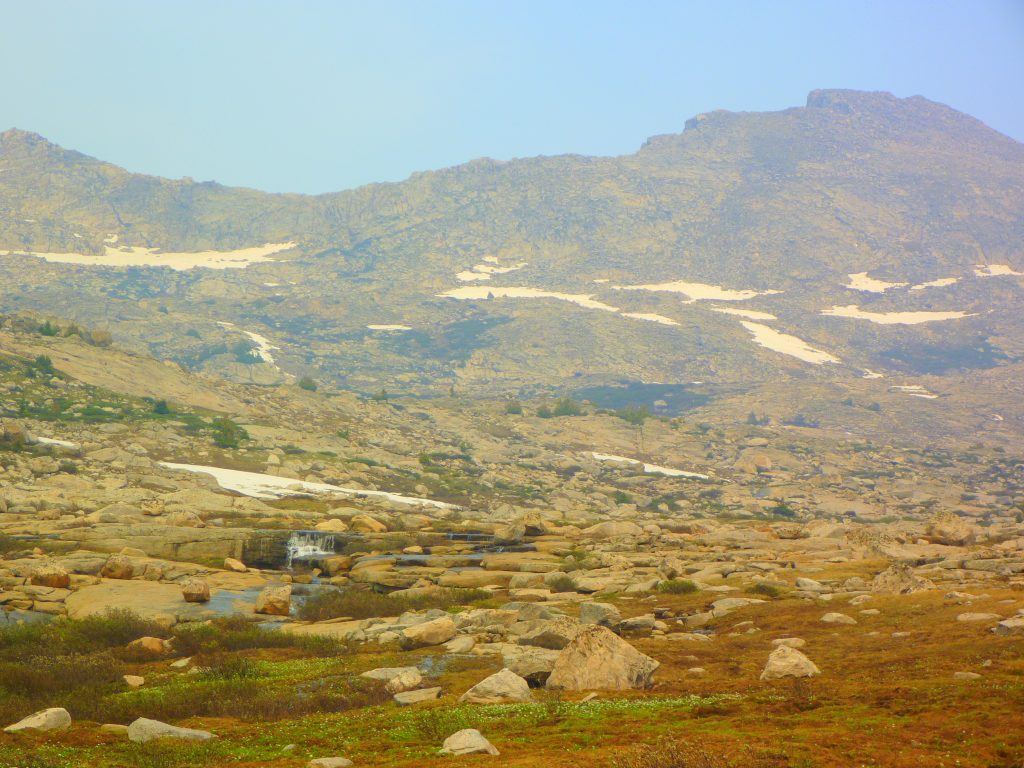 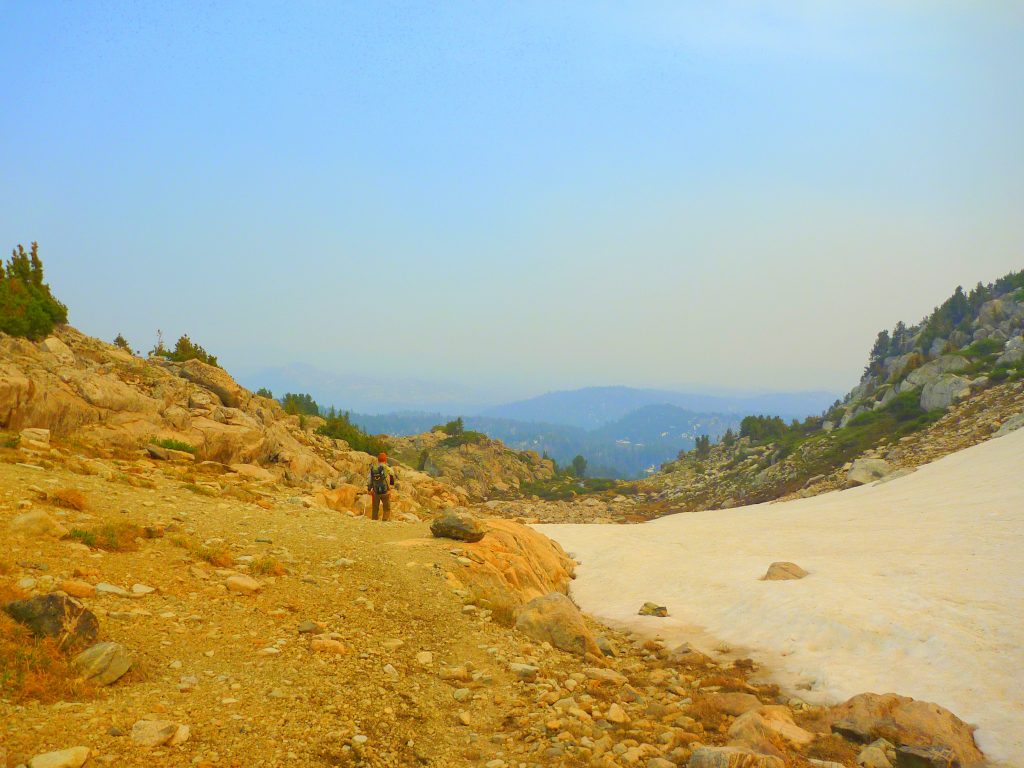 By the time we reached our campsite in Europe Canyon the smoke had descended upon us once more. I didn’t even take any photos because they would have just been depressing. We made camp and turned in early, occasionally hearing the snuffs and snorts of our bear friend. We found fresh tracks all around a 10 foot radius away from our tent, but we keep a clean camp and always hang our food well away so we weren’t too worried about it. There were no problems and we saw no more tracks after that night. He must have checked us out and found us to be both harmless and boring and moved on to more curious smells and sights and sounds.

The next morning we woke up bright and early and began our hike further south. 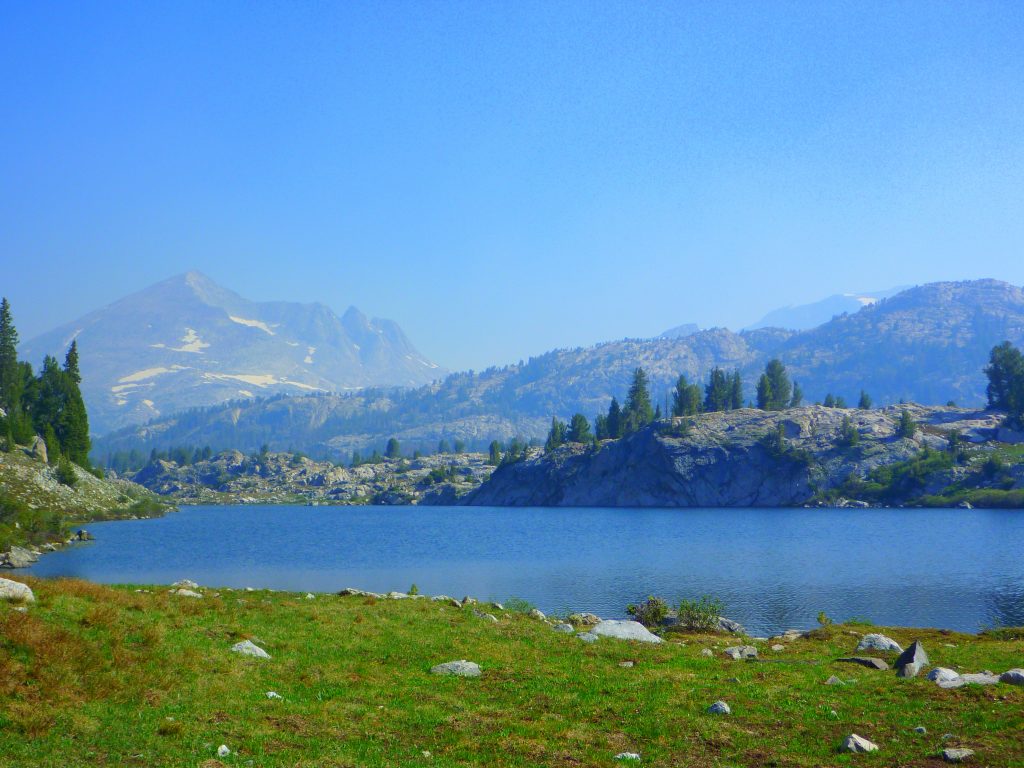 As we started hiking we found some more tracks. These mountain lion tracks made me way more nervous than the bear tracks from before. Generally, a bear makes his/her presence known by making some sounds while they check things out. But cats are sneaky and actually stalk you, sometimes for miles. I kept my eyes on the trees for a while after these tracks disappeared, but we never saw hide nor hair of this biiiiiiig kitty. 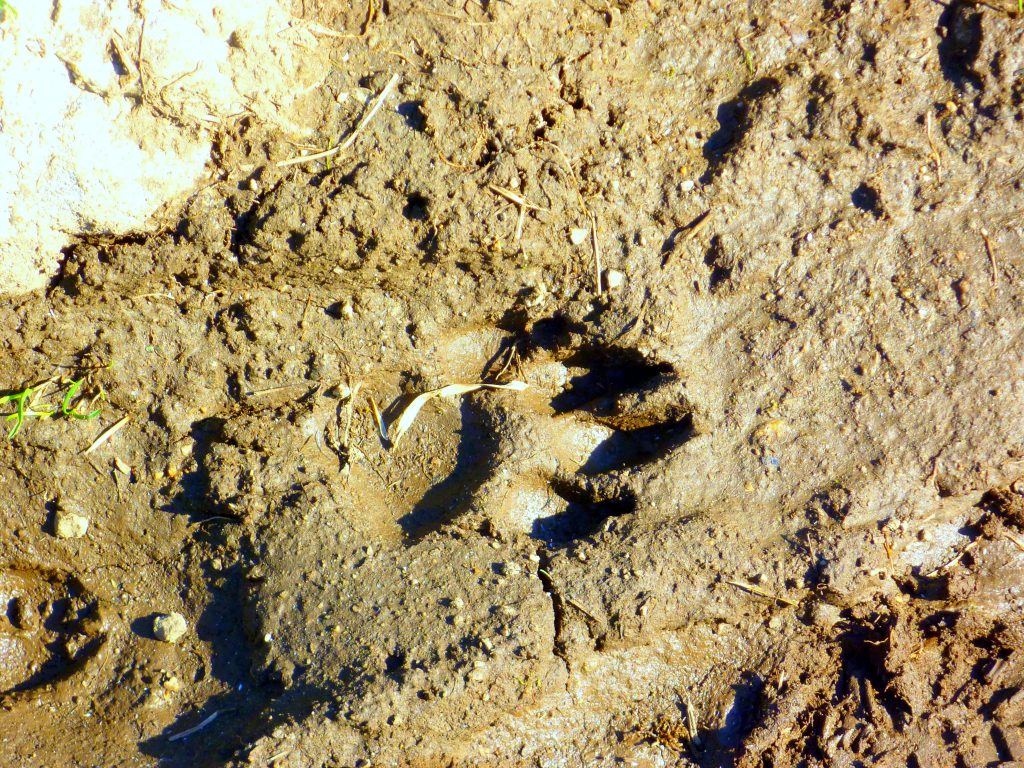 We kept up a pretty steady pace picking our way through meadows and forest, and stopped for lunch at Raid Lake. Raid Lake is big, and very open to some beautiful views, especially of Mount Bonneville. 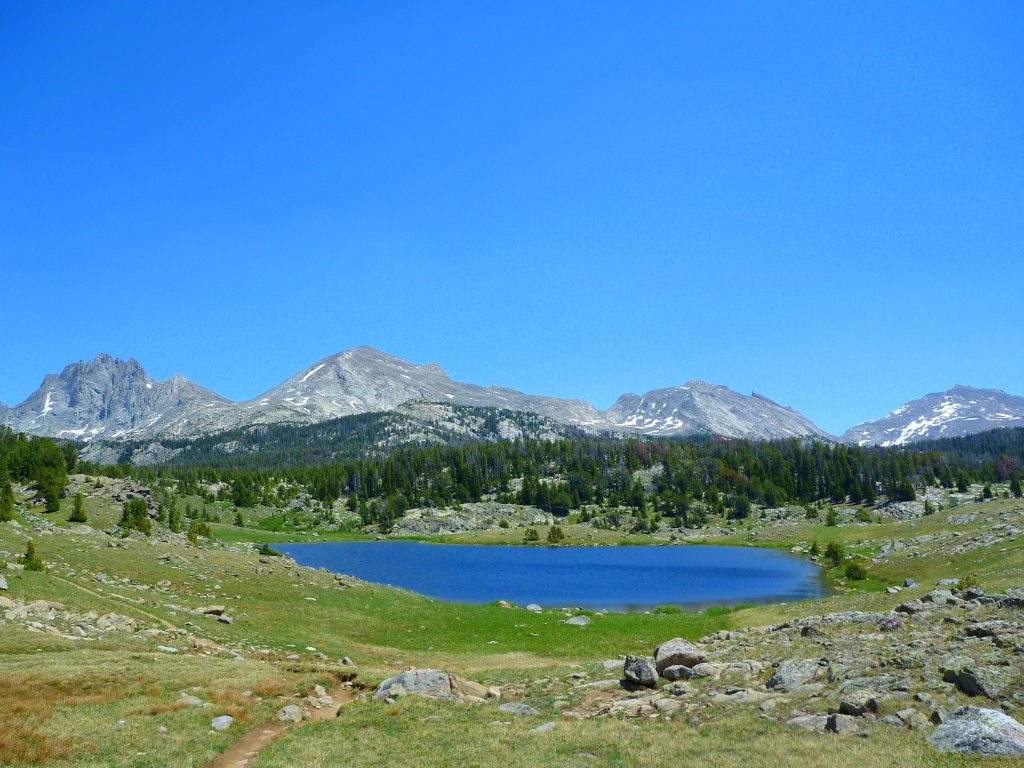 We stayed high in meadows for a while, getting big views in all directions and seeing an old cabin at Cross Lake. We decided to drop down and make a camp near Washakie Creek. The views of the Cirque from afar just kept getting better and better, until we started another snowy descent. 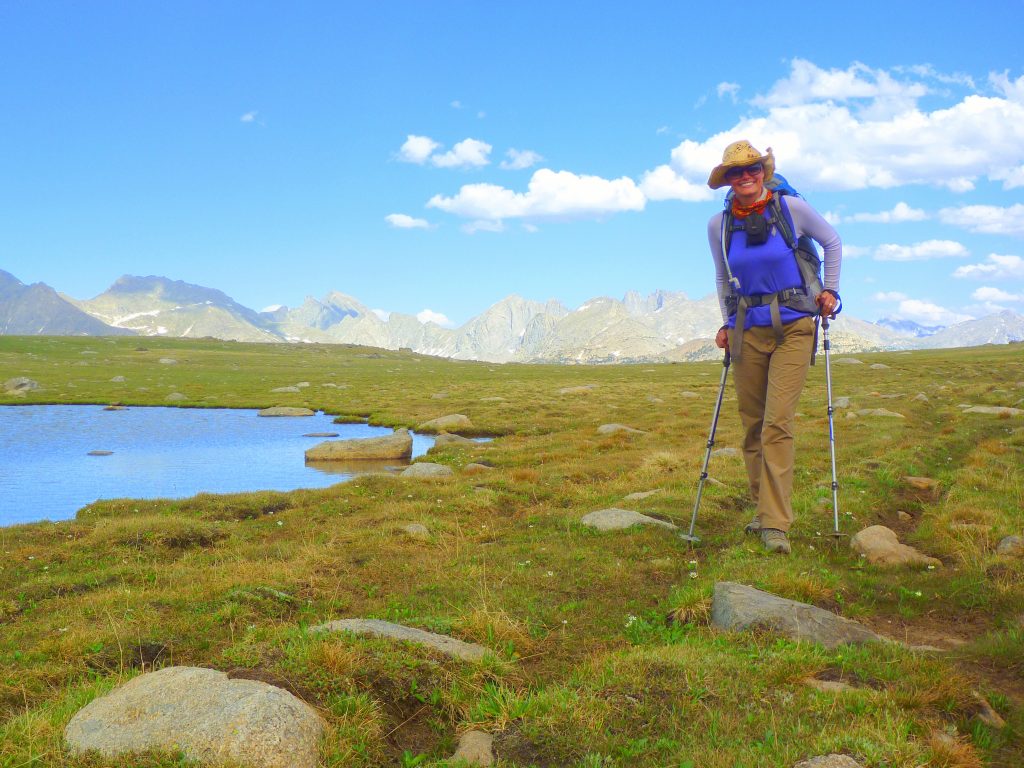 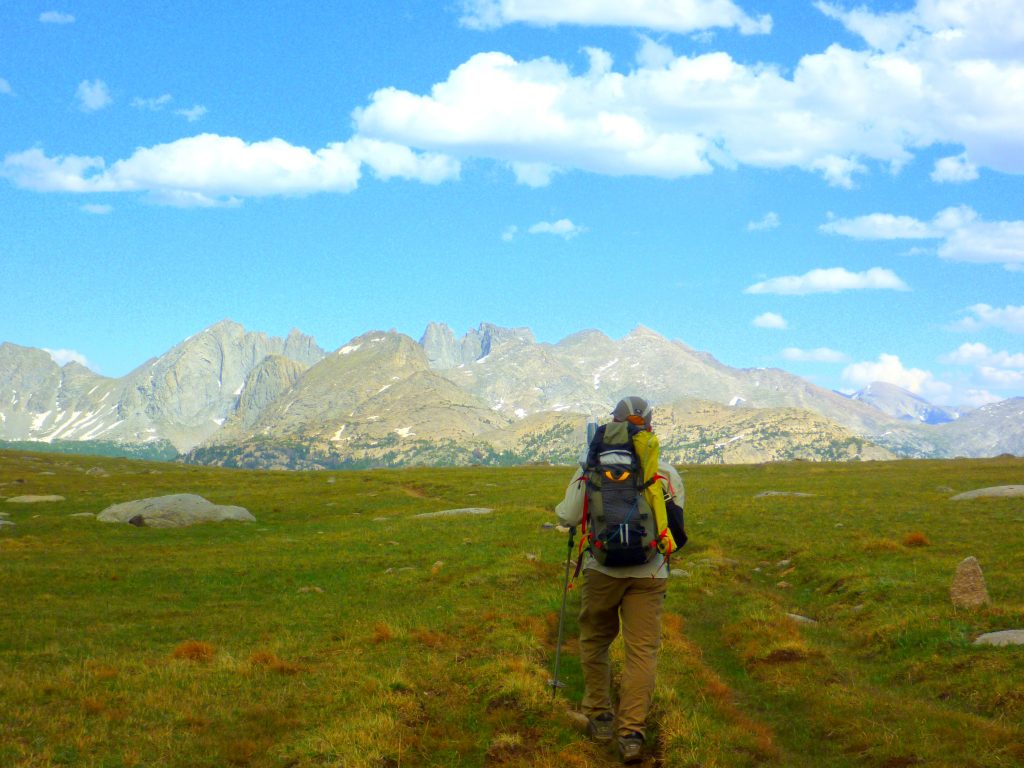 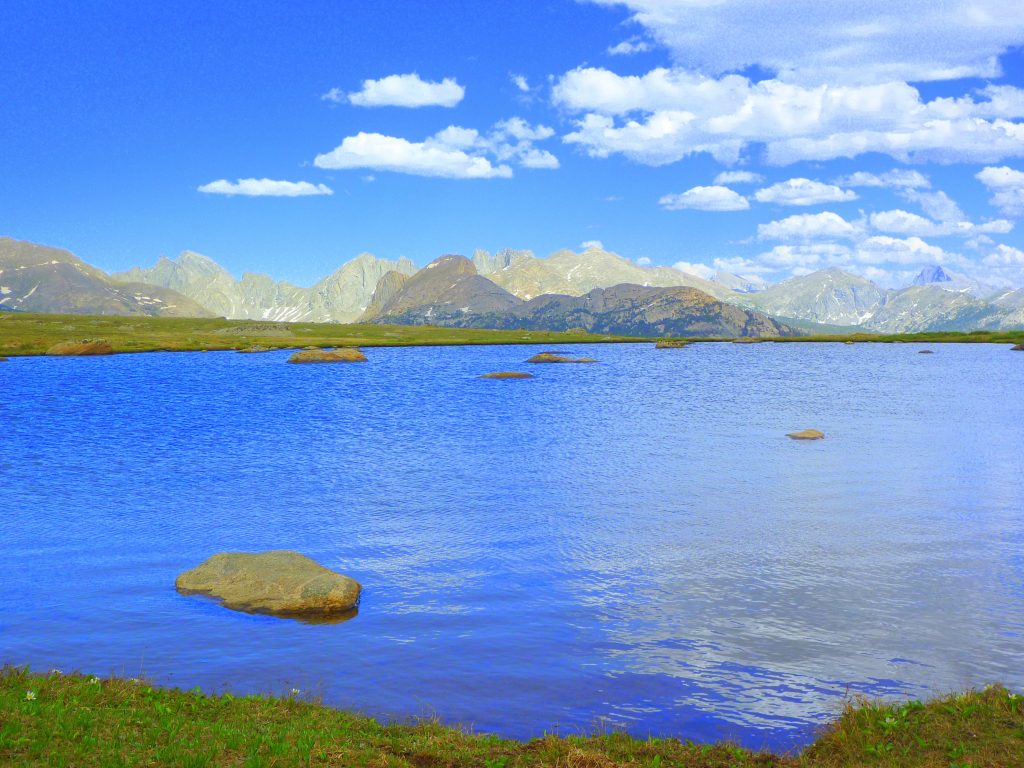 We made camp in a springy, grassy meadow lined with wildflowers, and close enough to Washakie Creek that Josh disappeared for a few hours of solo fishing while I happily read with the sound of the stream in the background. As night descended the stars were visible (no smoke tonight!) and incredible. If it were not for the horrendous mosquito infestation we probably would have skipped the tent and just slept under the night sky, but the incessant drone of the blood-suckers kept us in the tent.

Our final day dawned bright and clear. After a morning of fishing Washakie Creek again, we packed up and began to make our way toward Big Sandy Trailhead. We stopped at Marm’s Lake for some more fishing and had great success. Marm’s Lake doesn’t seem to have a ton of big fish, but the little brook trout are plentiful and make for fun, rapid, flyfishing. 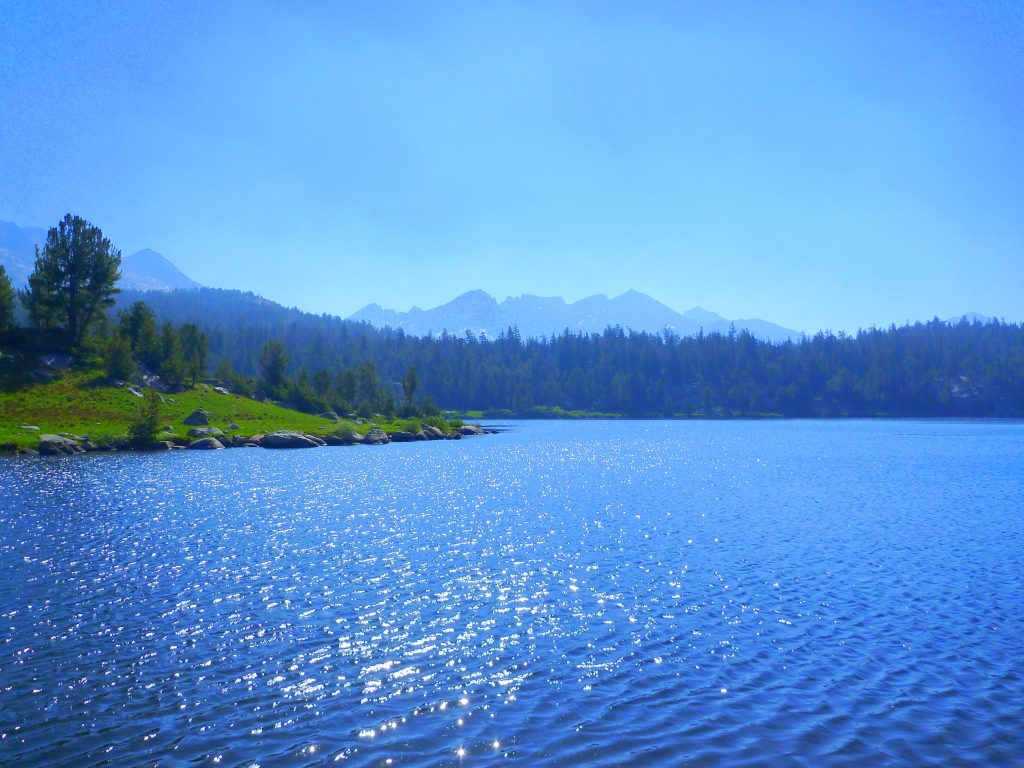 We made it to our vehicle (thanks, Great Outdoor Transportation Company for another great vehicle shuttle!) just around lunchtime. Since it was the Jeep, I had to drive home (no broken arm shifting allowed)…I don’t exactly love to drive the Jeep, but I made do. The cooler thoughtfully placed in the back still held a cold soda for me and a cold beer for Josh. How can you argue with service like that?