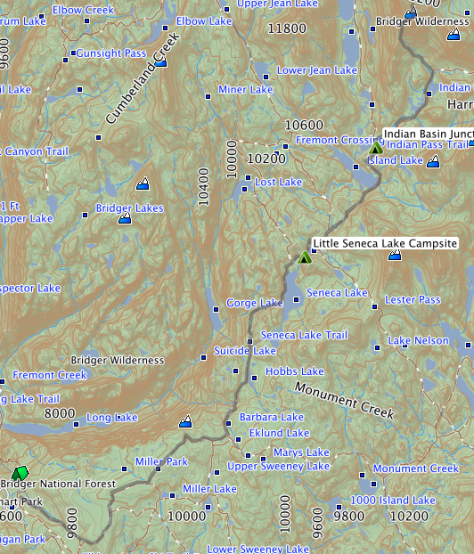 Sierra just turned ten, and to celebrate her birthday we decided to crown off the double digits by summiting a peak, because…well, because we as a family are just weird like that. We decided to head in toward Fremont Peak because it’s an awesome summit. I’ve been on the summit of Fremont twice, so for me it was no big deal. Sure, we could have picked something like Warbonnet which is less distance, less elevation, and less scrambling, but no…I knew that Sierra could rockstar her way through it. I didn’t know she could do it as well as she did.

Sierra is strong. Seriously, she’s way more ripped than any other kid I’ve ever seen, and I totally confess my parental bias right up front. But in all honesty and all bias aside, the kid is outrageously fit. She is fit to the point that strangers will comment on it when they see her. Always. She’s a climber, a swimmer, a skier, a runner………an athlete. She has a drive that is unusual in its intensity, and she loves to challenge herself. She wants to be in the Olympics. So, we picked Fremont Peak because it was so far away, and so high up, and so rugged. We picked it so that she could be challenged.

We started hiking out of Elkhart Park around noon, with the sun full and strong overhead. The first 4.5 miles out of Elkhart Park are gradually uphill and mostly forested until you get to Photographer’s Point. There are a couple of meadows along the way, but with the heat, we relished the shade of the trees. 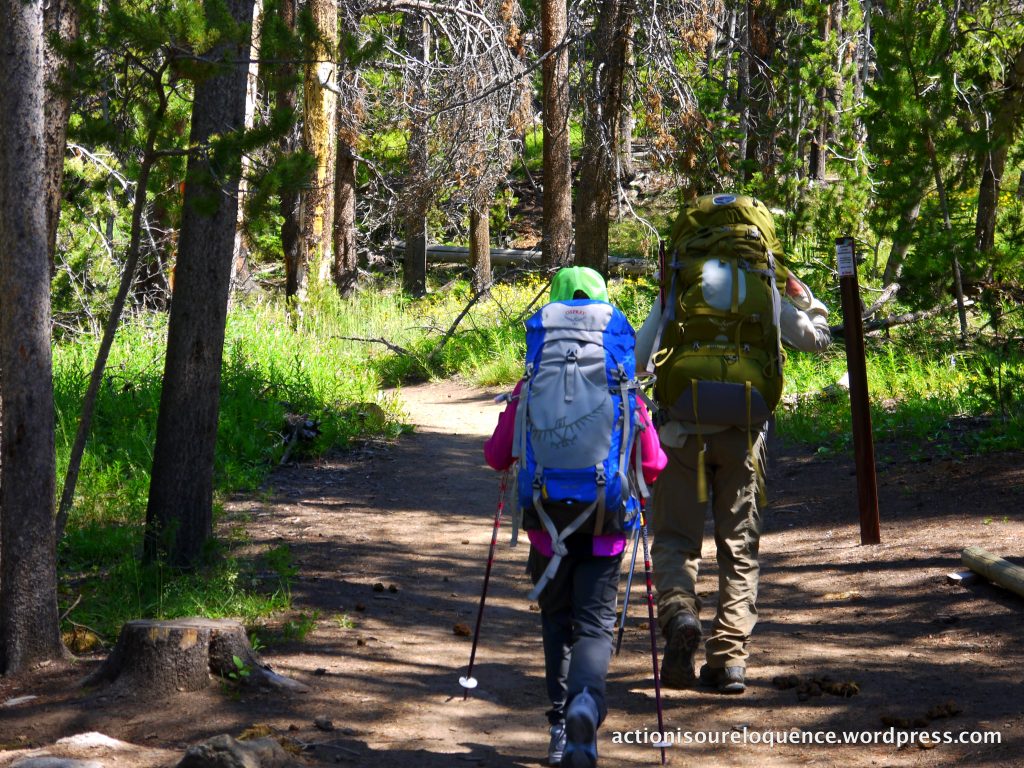 Here’s the deal about July: the bugs are awful, the fishing is incredible, the wildflowers are UNBELIEVABLE.

Our first views of Fremont Peak were from meadows that were literally carpeted with wildflowers and humming with the drunken sounds of bees having a party in the pollen. 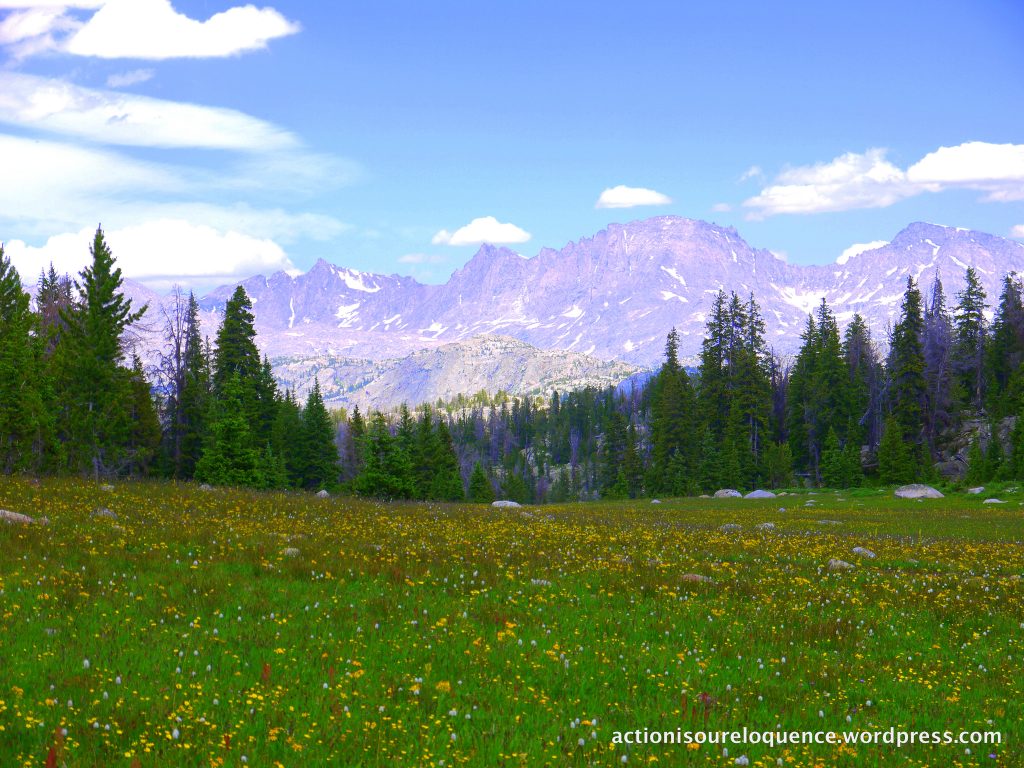 After Photographer’s Point, the trail drops down toward Barbara Lake. The trail is uneven, rocky, and dotted with tree roots, so tread lightly. I myself broke my ankle on one epic hike in this area (see my post on Elkhart to Green River Lakes), so watch it!

You begin to enter rolling terrain after Barbara Lake.  Views that motivate when you reach hilltops, and deep forested sections dotted with tarns and wildflowers will take you to Hobbs Lake, which is the first real lake of any size you’ll come to, although it is tiny when compared to what is on the horizon. There is good camping at Hobbs, and good fishing as well. 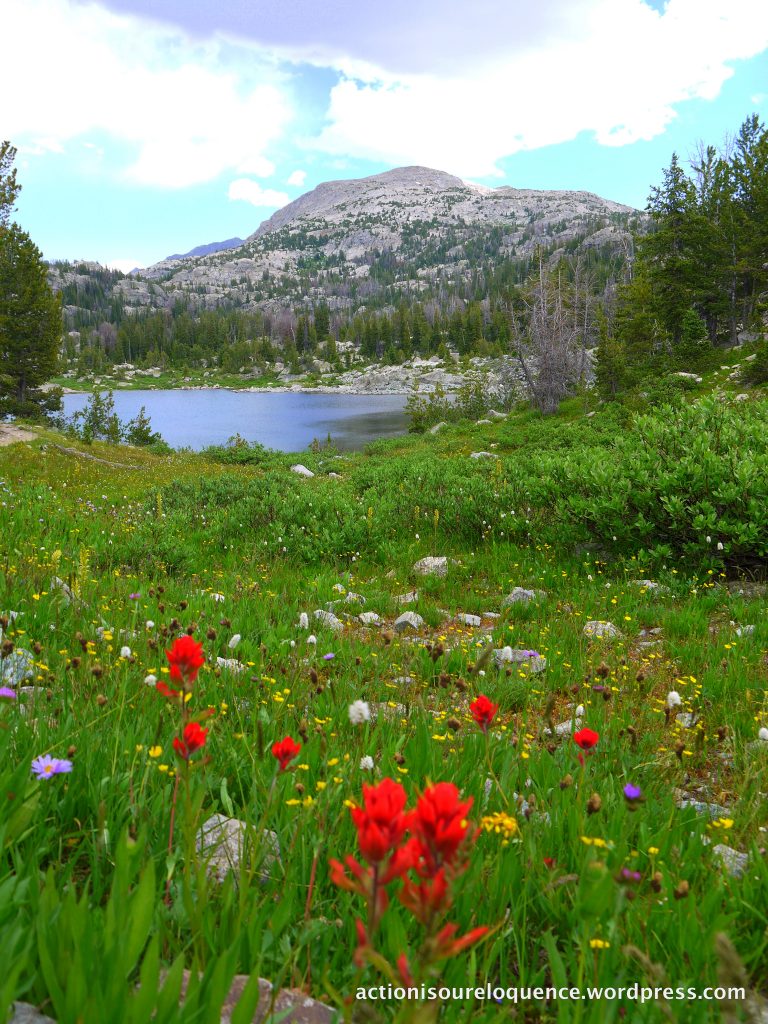 If folks are planning on splitting up the hike to Island Lake or Titcomb Basin into two days, I try to steer them to camp at Seneca Lake or Little Seneca Lake. The main reason for this is that it gets the first big uphill push out of the way. After Hobbs Lake, there is a pretty long uphill section that peaks out above the very large Seneca Lake. You actually drop some elevation as you cruise alongside the lakeshore, and the trail is very rocky and should be hiked carefully. 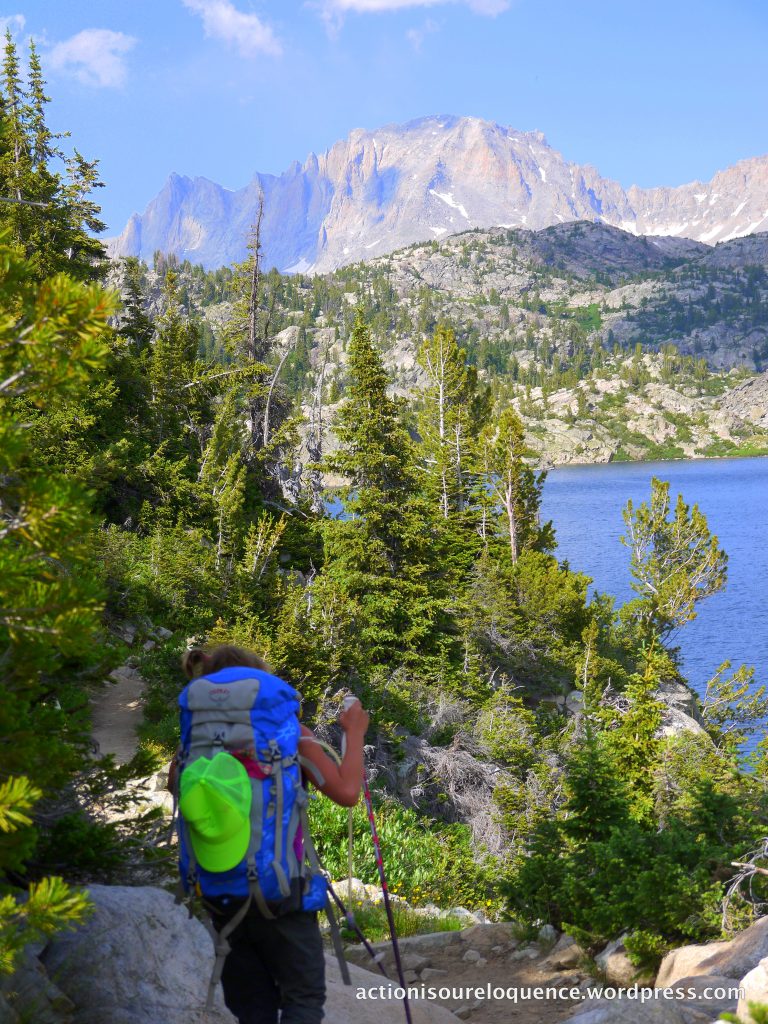 We took a long break at Seneca Lake for a late lunch and some fishing.  It was still early in the day and we only had around five more miles to go before we reached an area we wanted to set up camp and so we all took off our boots and socks and stretched out on a big slab of lakeside granite for a while. We saw no one, and we heard nothing outside of birdsong and the light slapping sound of the water on the surrounding boulders.

We cut across a boulder field at Little Seneca Lake, which is a brief shortcut that we employ most of the time we head in this direction. It’s that whole “the shortest distance between two points is a straight line” style of thinking, and since it’s a boulder field it’s not like we’re wearing a path into the grass or anything. It spits us out right at the Lester Pass trail junction, and we get back on the Island Lake Trail right away. 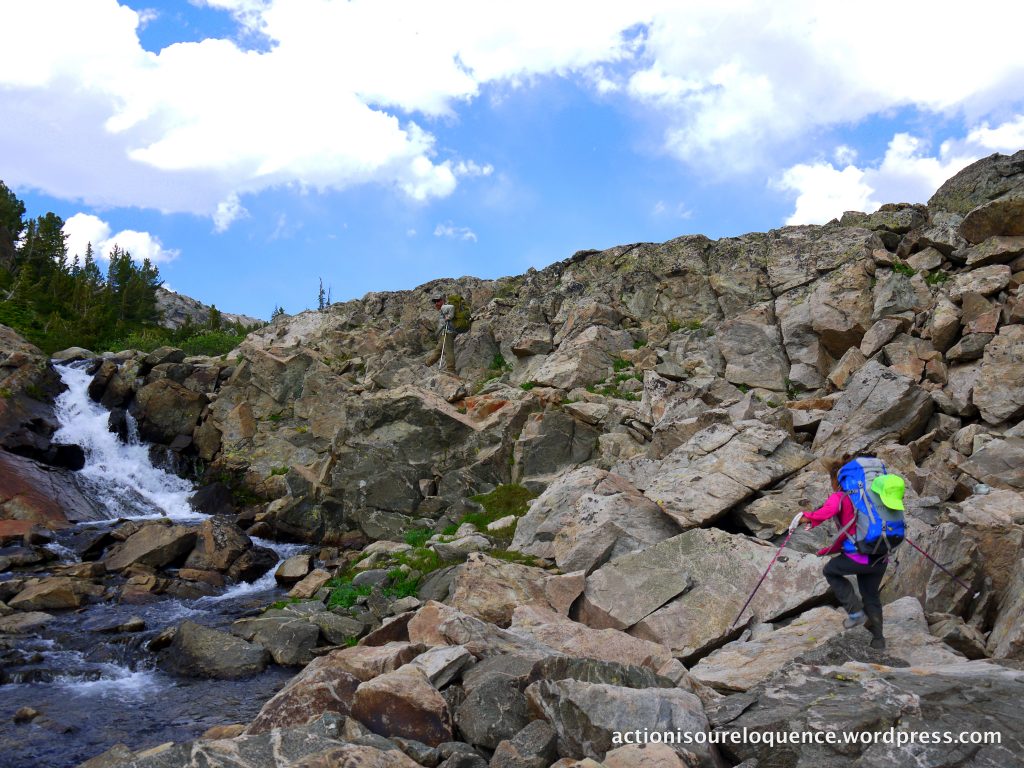 After Little Seneca Lake, the trail gains elevation again for one last big hill before Island Lake. At this point, you are close to treeline, and the views get better with every step you take. 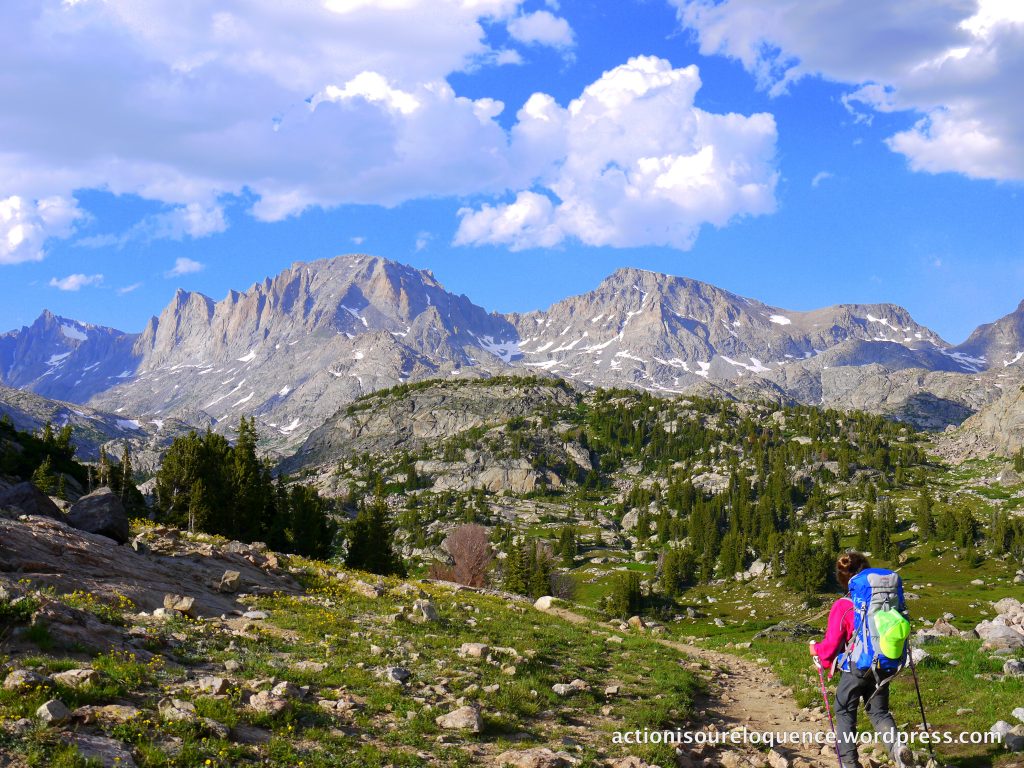 There was still a snowfield just prior to Island Lake, and the trail that drops down to the lake proper was a river. Once we began to flatten out parallel to the lake the trail dried up a bit, but there were still some muddy sections that would about pull a shoe off, and the stream crossings were deeper than normal this time of year. Our huge snow year pushed everything back about three weeks this summer. 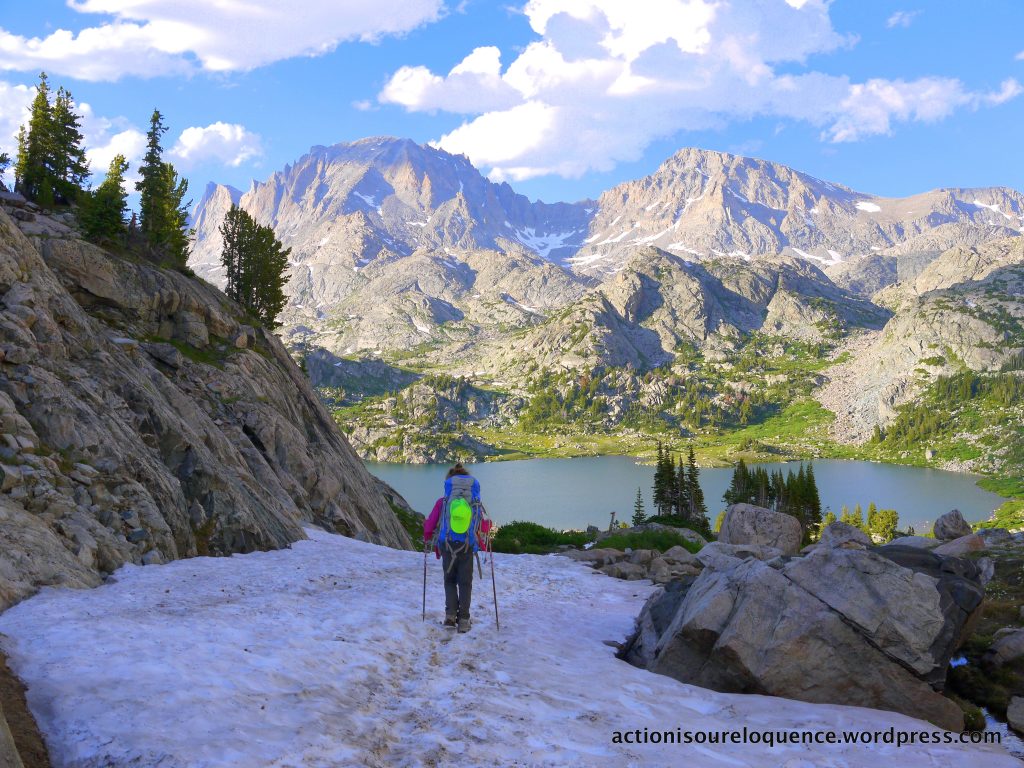 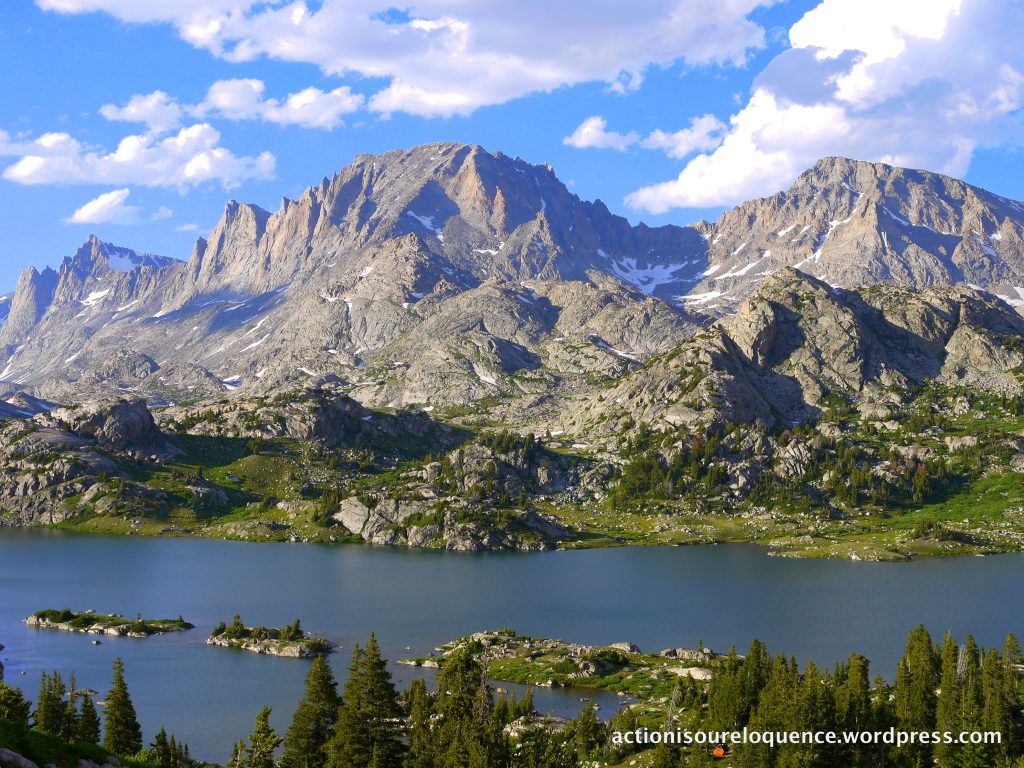 To do the walk-up route on Fremont Peak you access the route via Indian Basin. Normally, we push through and camp in Indian Basin so that we don’t have to wake up so early on summit day. However, this year due to the snow, we figured that we would have more comfortable camping available to us closer to Island Lake. Therefore, we camped right near the junction for the Indian Pass Trail. 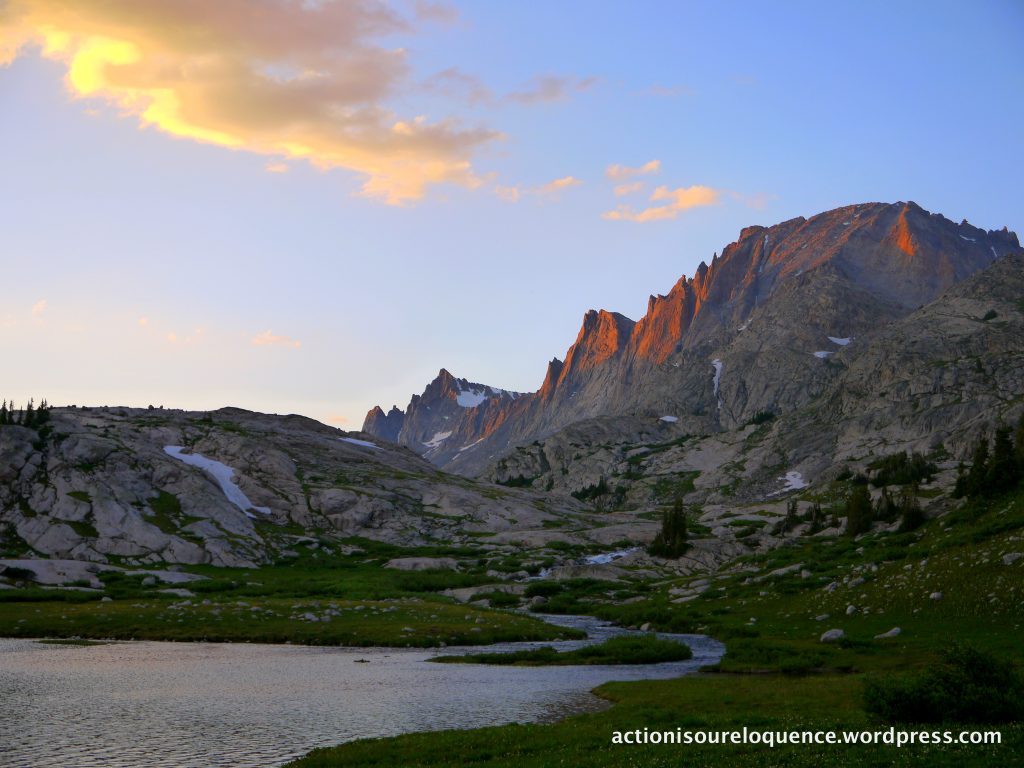 With these majestic peaks surrounding us, it always means an early night. After around 13 miles that day, however, bed was inviting and we all nestled in our tent by 9:30. That night there was a spectacular thunder and lightning storm that flash illuminated the tent for about two hours. We had hard rain, lots of wind, and the sound of the thunder reverberating off of the mountains was loud enough to shake the tent walls. It was amazing; I love mountain thunderstorms.

The next morning we woke up at 5:30 to head up to the summit. It was a chilly morning, and after our oatmeal Josh and I each packed up for the day. It was forecasted to be very windy so we opted to keep Sierra pack-free. I didn’t want her to be blown off-balance while we were on the peak.

We began our hike as the sky began to lighten, so we didn’t need headlamps. 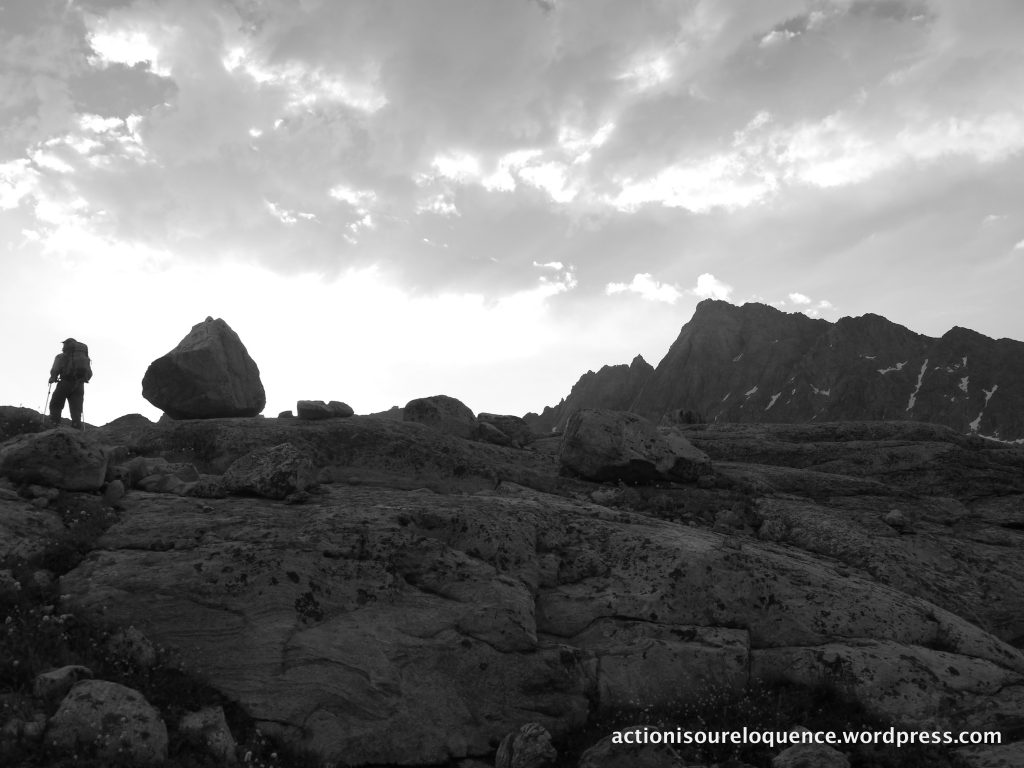 Indian Basin is gorgeous. It’s a lake-filled bowl, surrounded by peaks and is always completely empty of people. I’ve never spotted another person or tent there, which is another reason why I try to camp there instead of Titcomb Basin. The lakes in Indian Basin do not hold fish, but they often have ducks or other waterfowl on them. 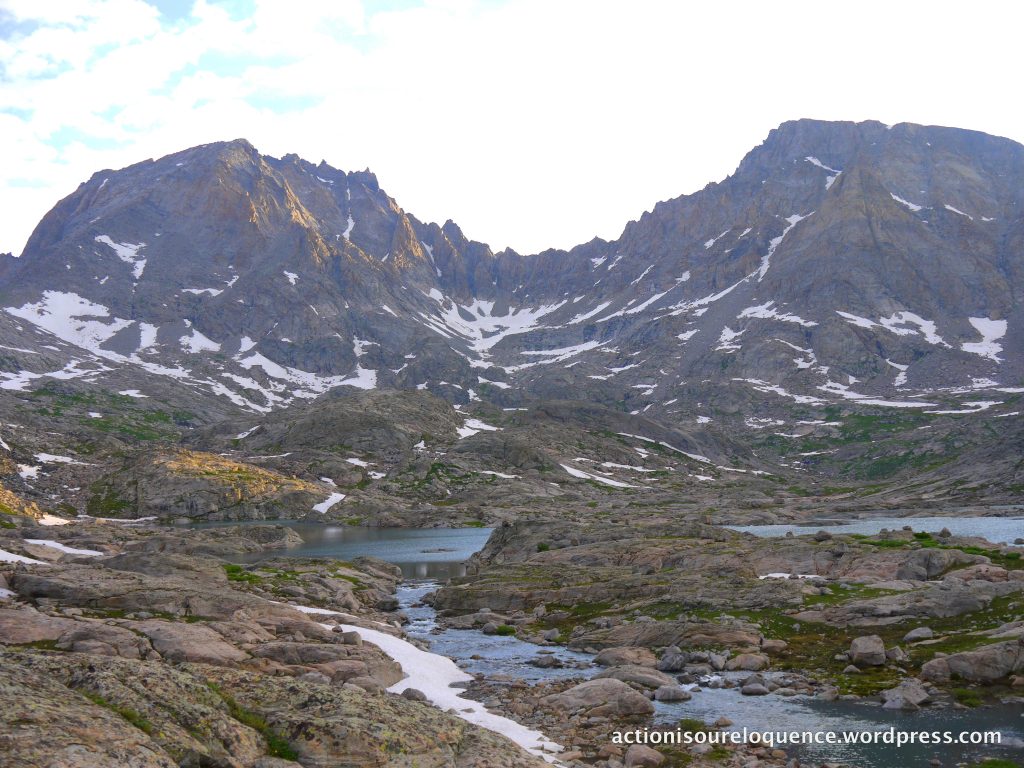 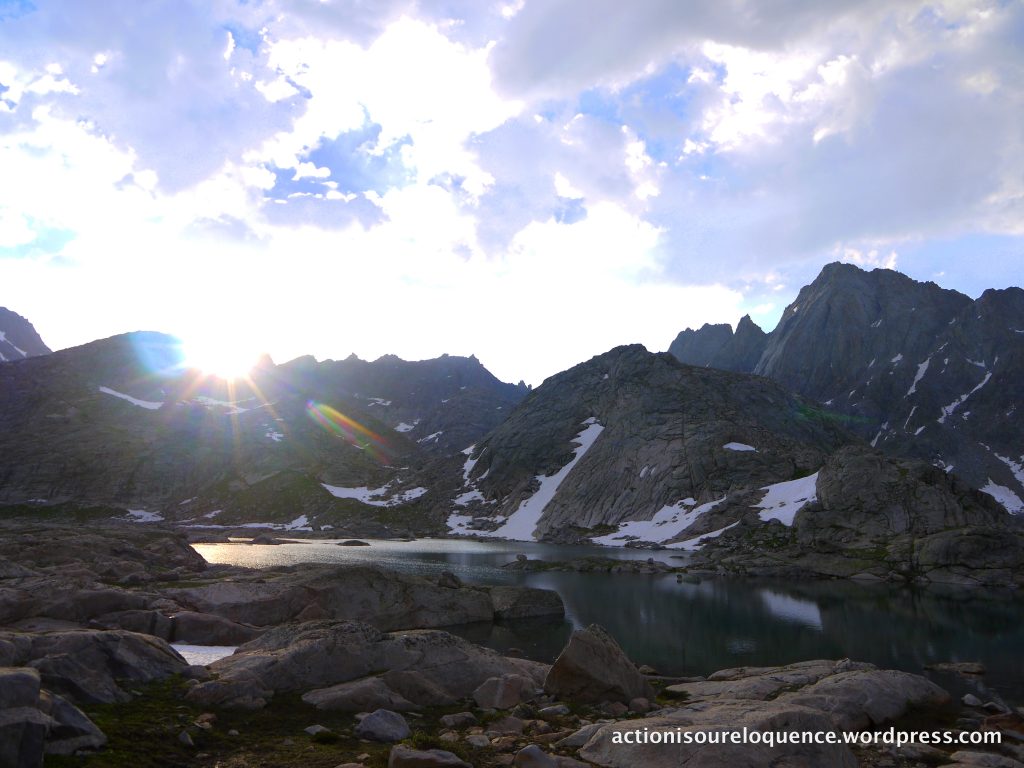 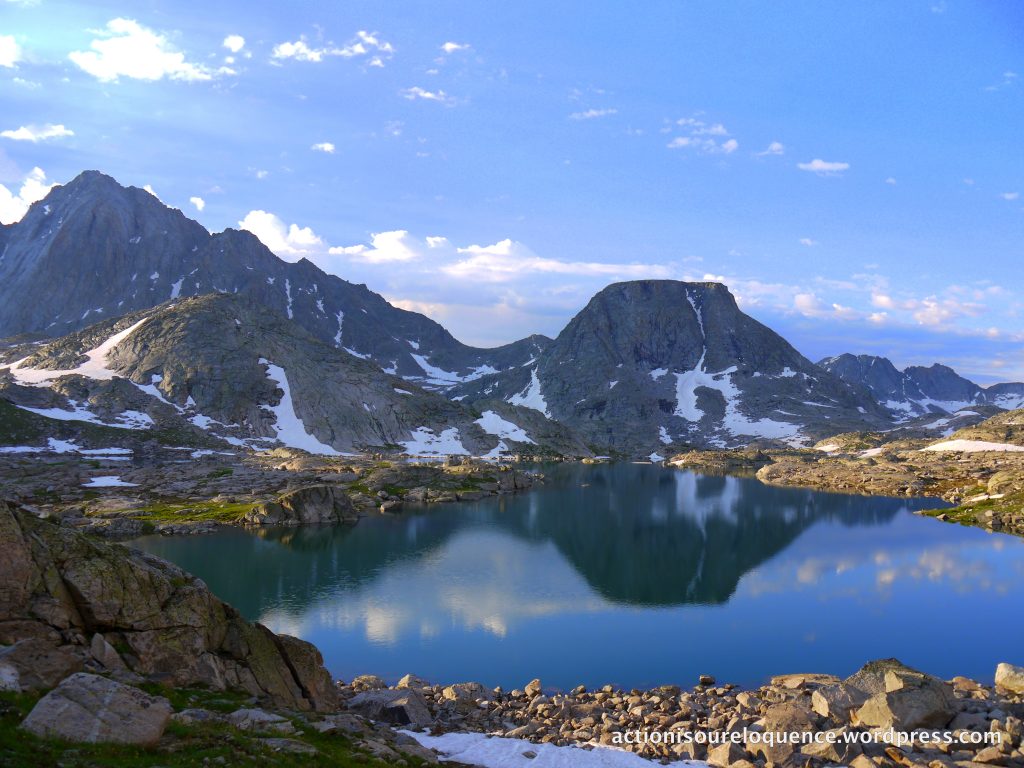 There was a lot of snow in Indian Basin, as we suspected. The snowfields actually make the ascent to the saddle much faster because they cover the boulder fields you would otherwise have to hop. We taught Sierra how to glissade, and how to self-arrest with her trekking poles. The snow was soft and easily navigable. We did not use crampons or ice axes, and we could kick in steps really easily. 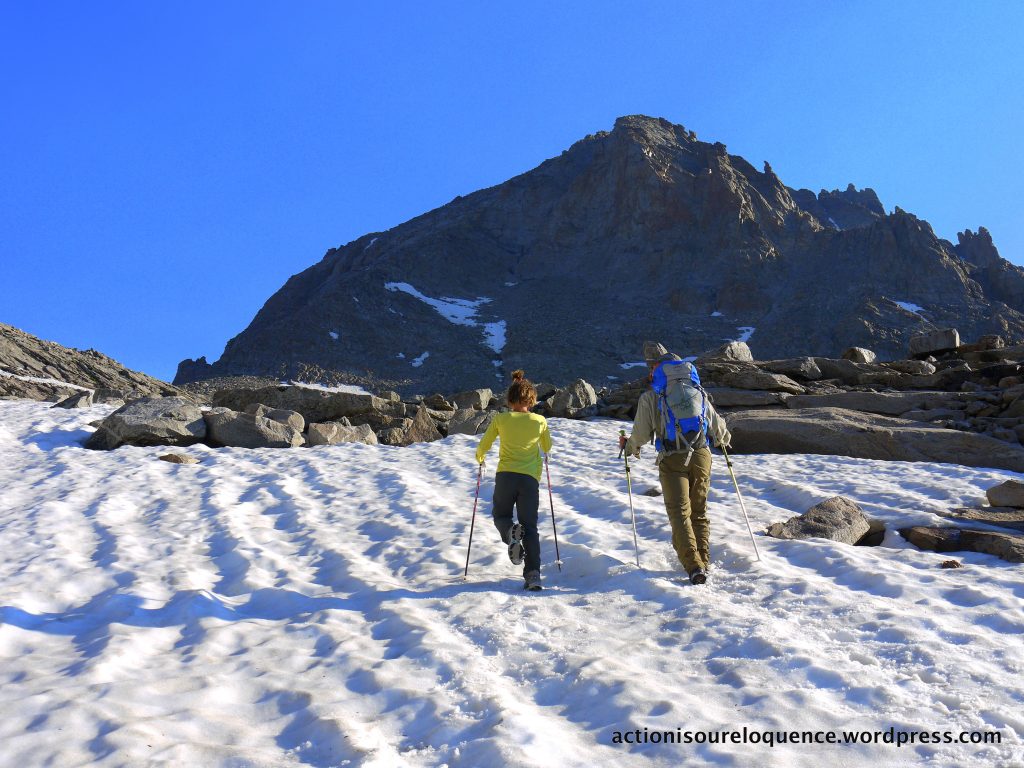 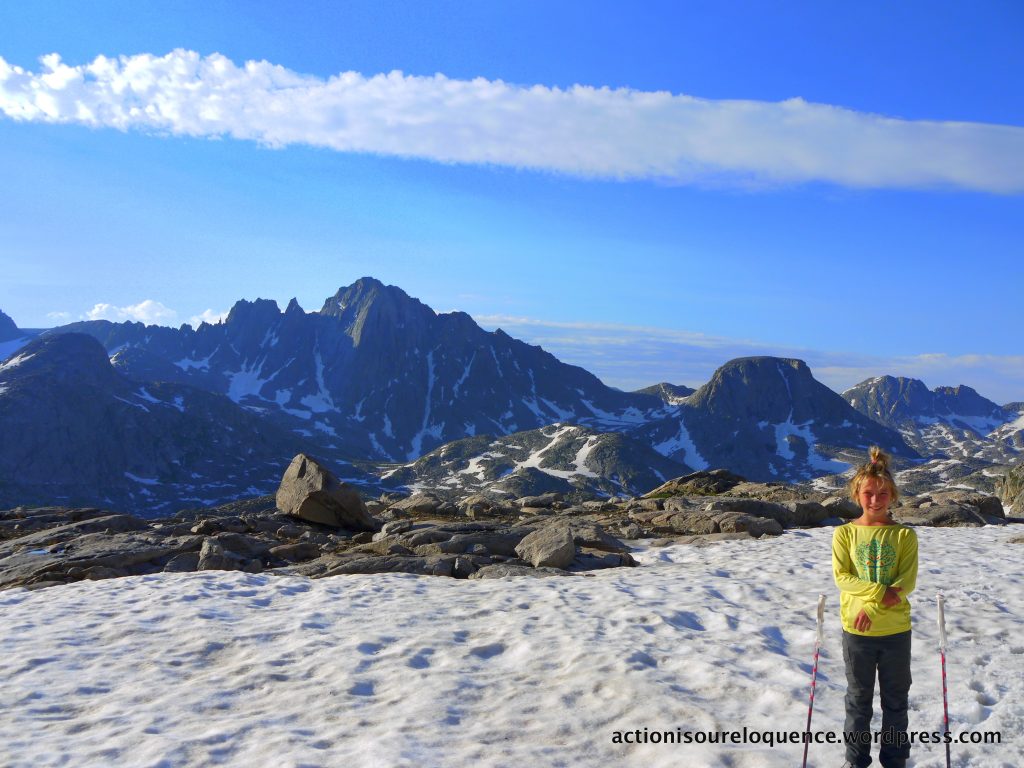 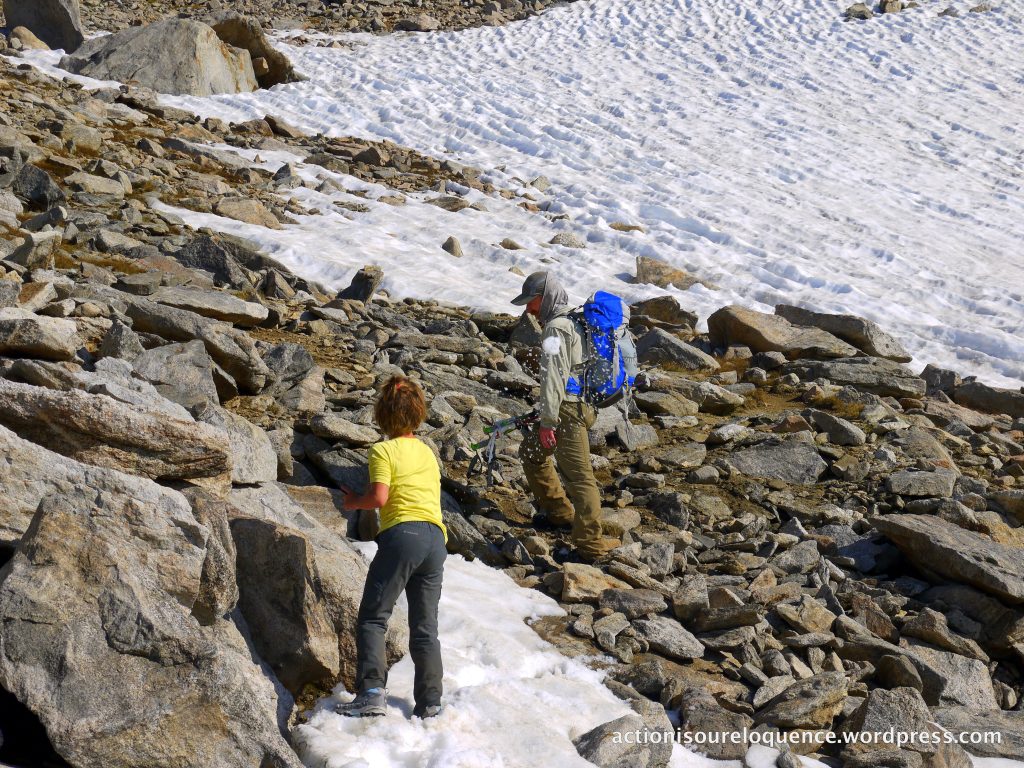 We took a brief break at the saddle to boost Josh and Sierra’s caloric intake before heading up to summit. The views from the saddle are impressive. On one side you look down directly to the Titcomb Lakes and Mistake Lake, and on the other, Indian Basin unfolds beneath you. 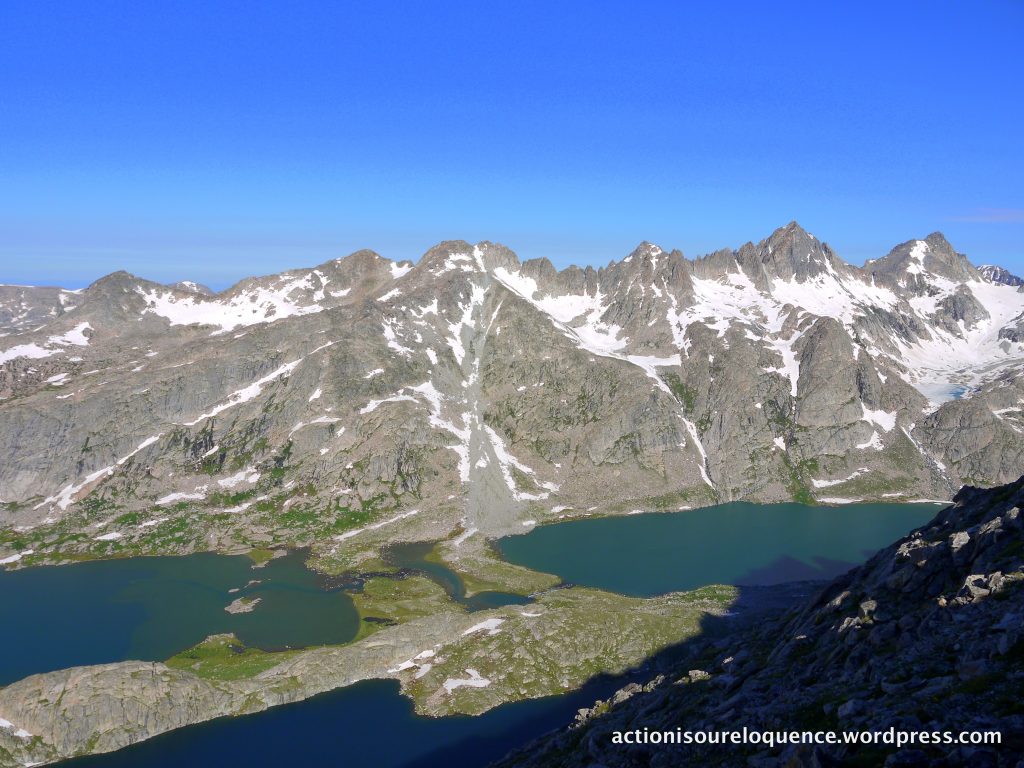 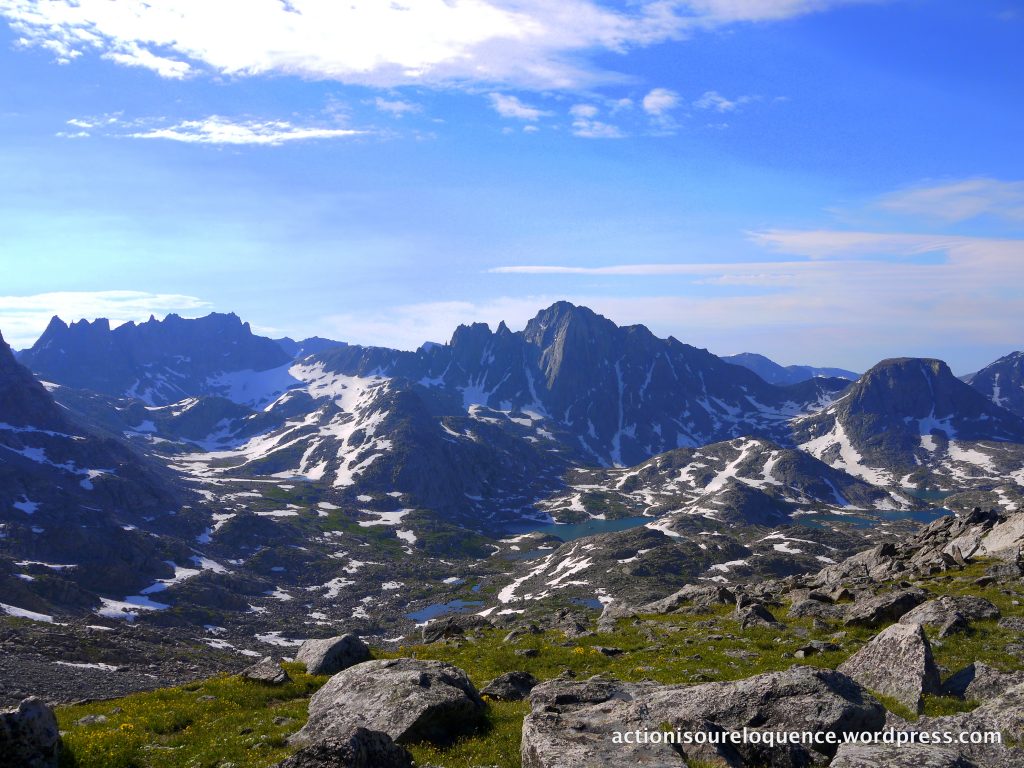 We made it from the saddle to the summit in about two hours. It was really windy, and when we made it to the top Sierra couldn’t stand because of the wind. We explored the summit line and eventually hunkered down behind a large granite slab so we could sit and enjoy the view without the constant wind. Fremont Peak is at 13,743 feet above sea level, making it the third highest peak in the state, and the second highest in the range. There has been some discussion that Sierra is one of the youngest people to summit Fremont Peak (if not the youngest). She is almost certainly one of the youngest to hike the entire way in, rather than using a pack animal to assist in any way. 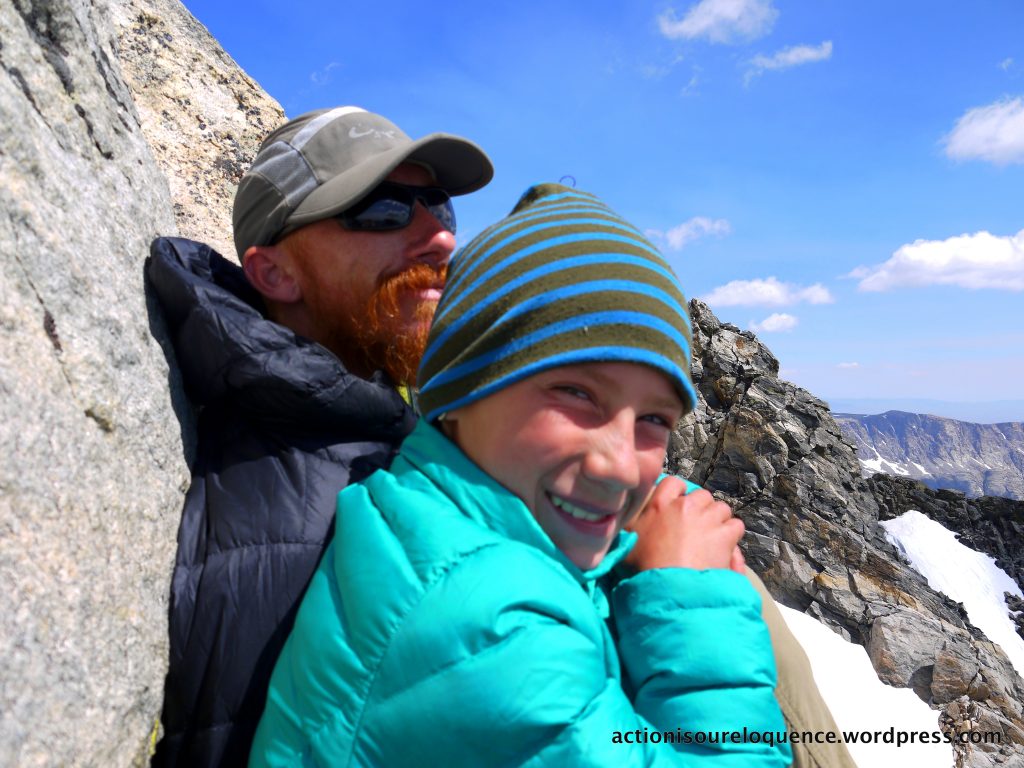 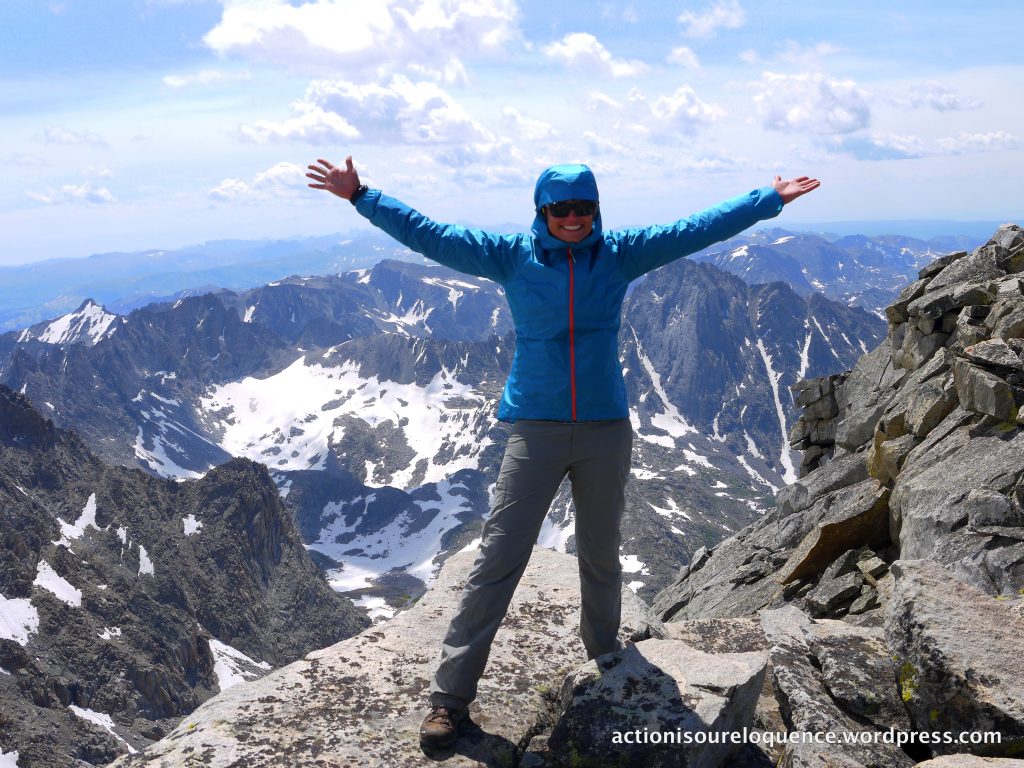 The entire backside of Fremont Peak is loaded with glaciers, and the surrounding peaks look like they’re growing out of the many lakes we have in the Winds. 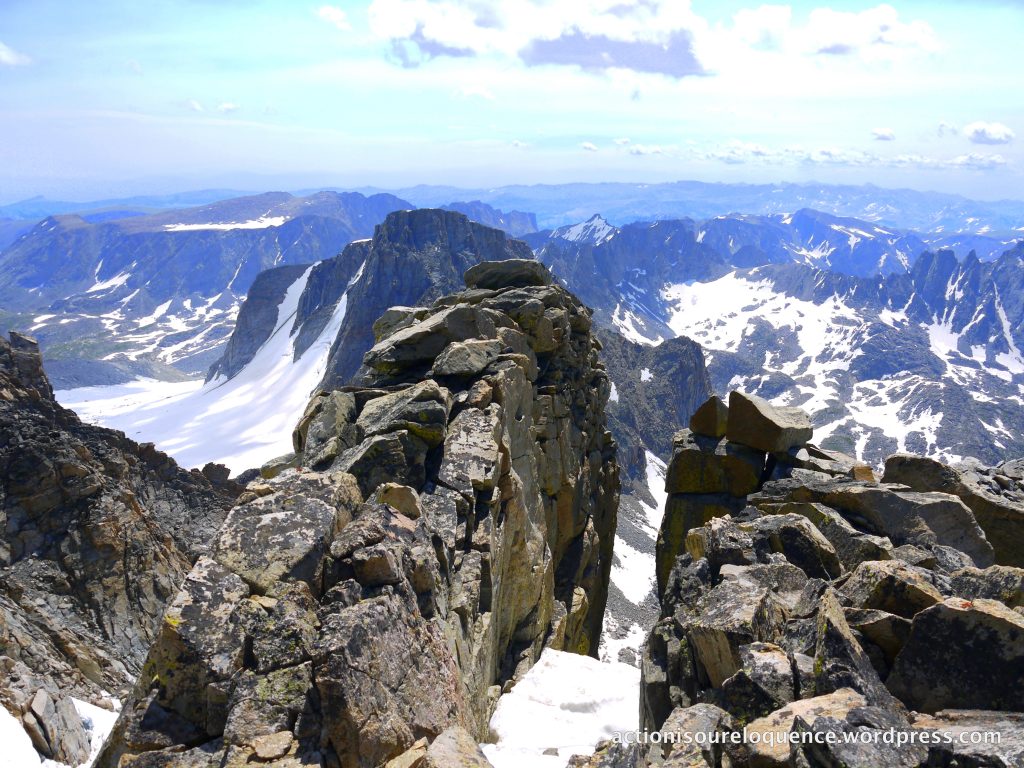 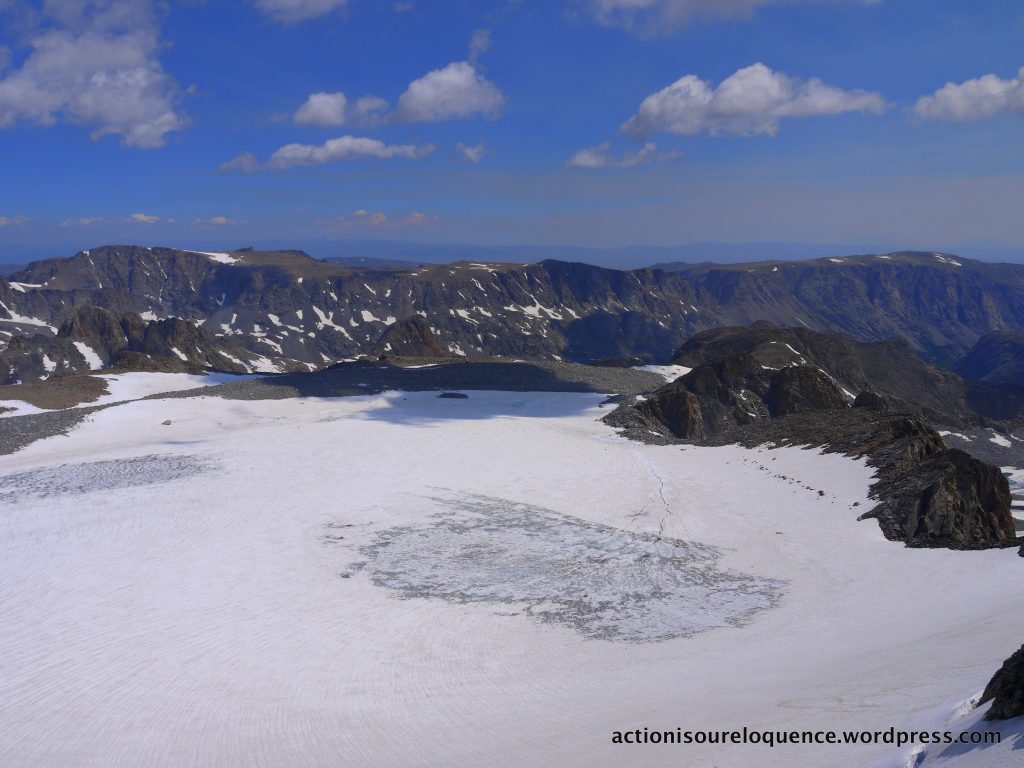 After about 40 minutes of exploring and resting, we began the descent back down to camp. As we descended the wind died down and it began to get warm again. 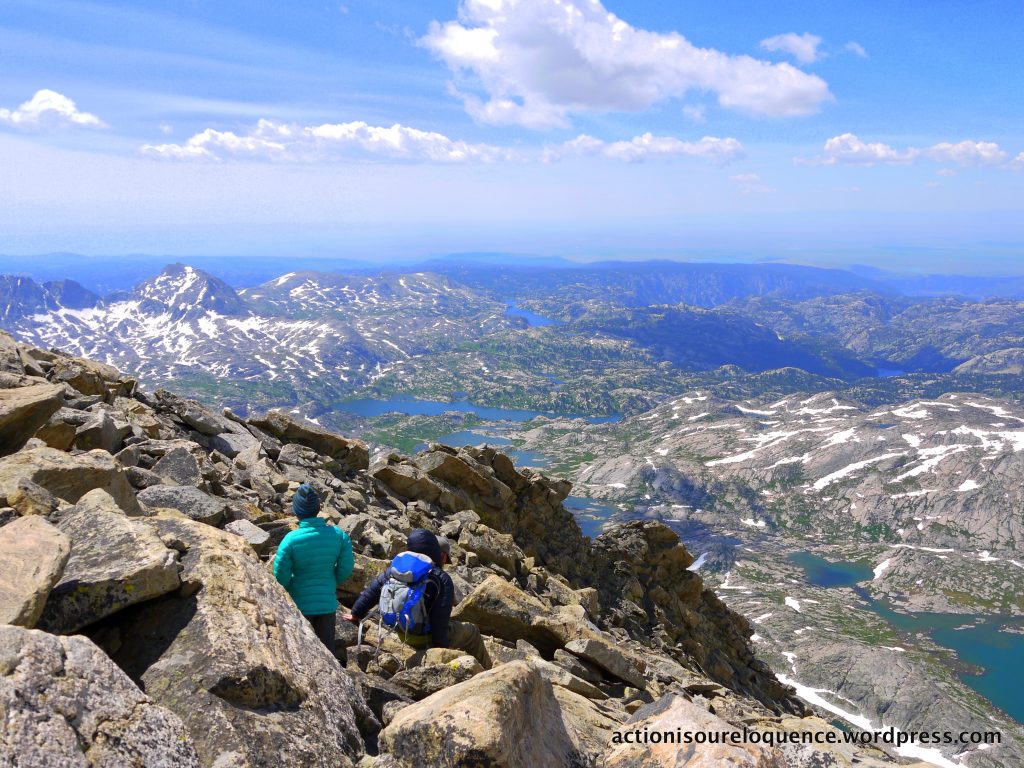 The best part of descending the snowslopes?

Sierra loved it. She would use her trekking poles like rowboat oars and push her way down so she could go as fast as possible before sideslipping and driving her poles in at the bottom to stop herself. 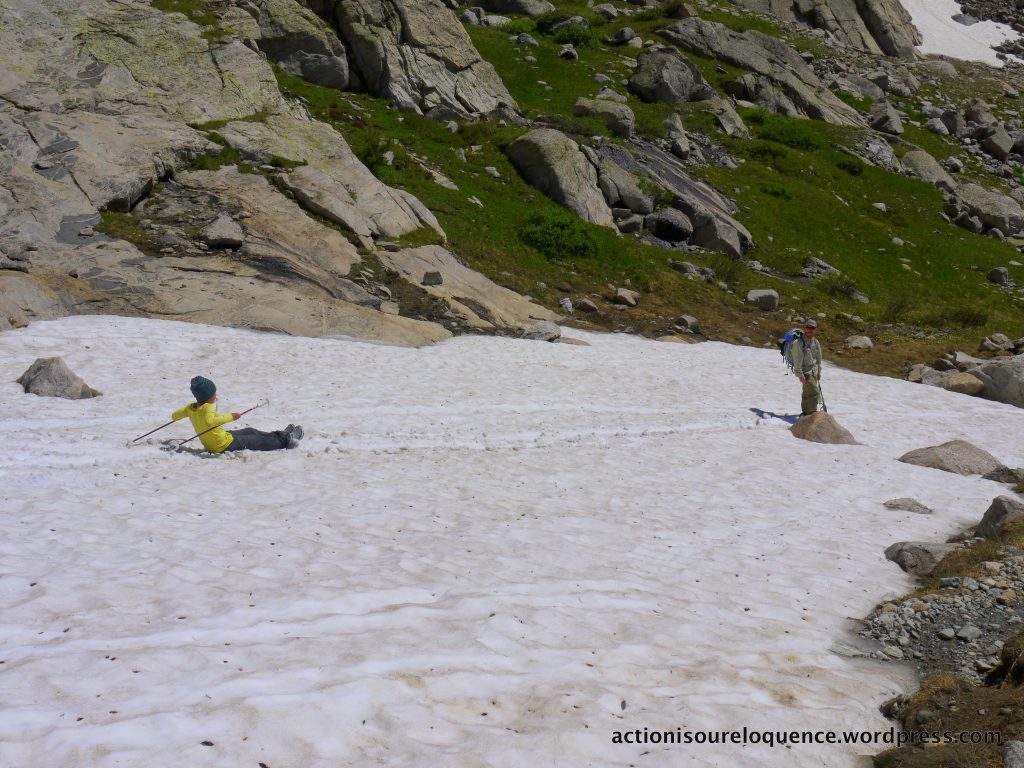 We made it back to camp in full light and the flowers were blooming all around our tent. We packed up and began to hike out. Our plan was to move camp down to Seneca Lake, but to take our time and do some good fishing along the way as it was so early. Sierra was on such an adrenaline high from her summit that she literally buzzed her way out of our campsite and practically ran from lake to lake. 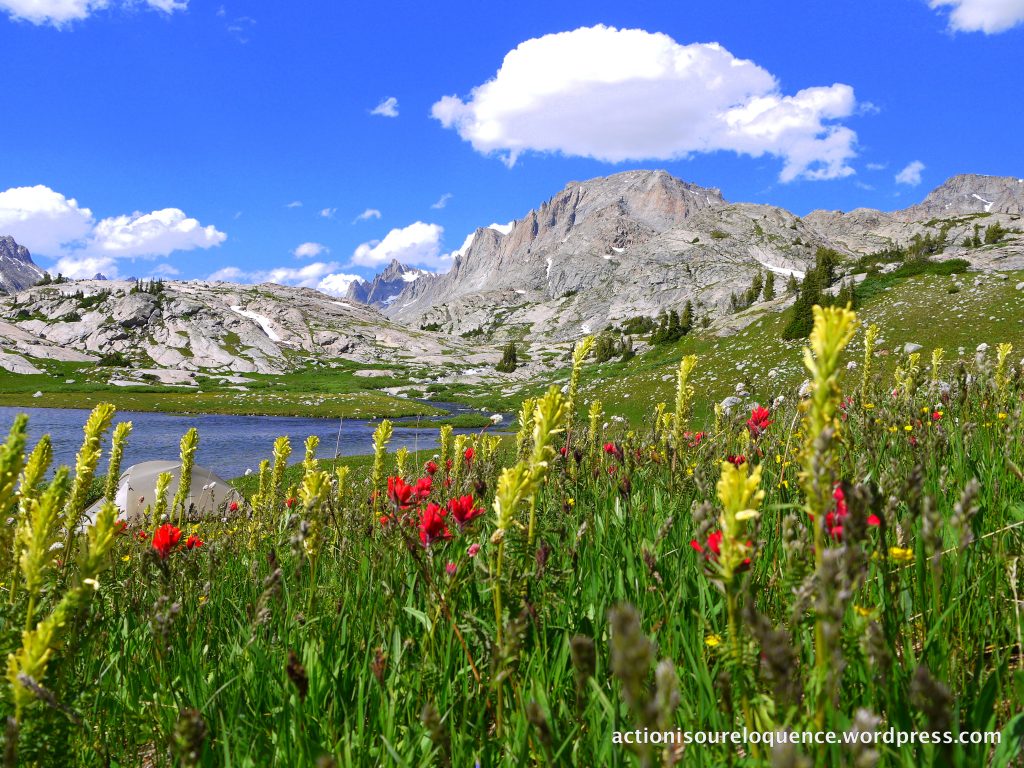 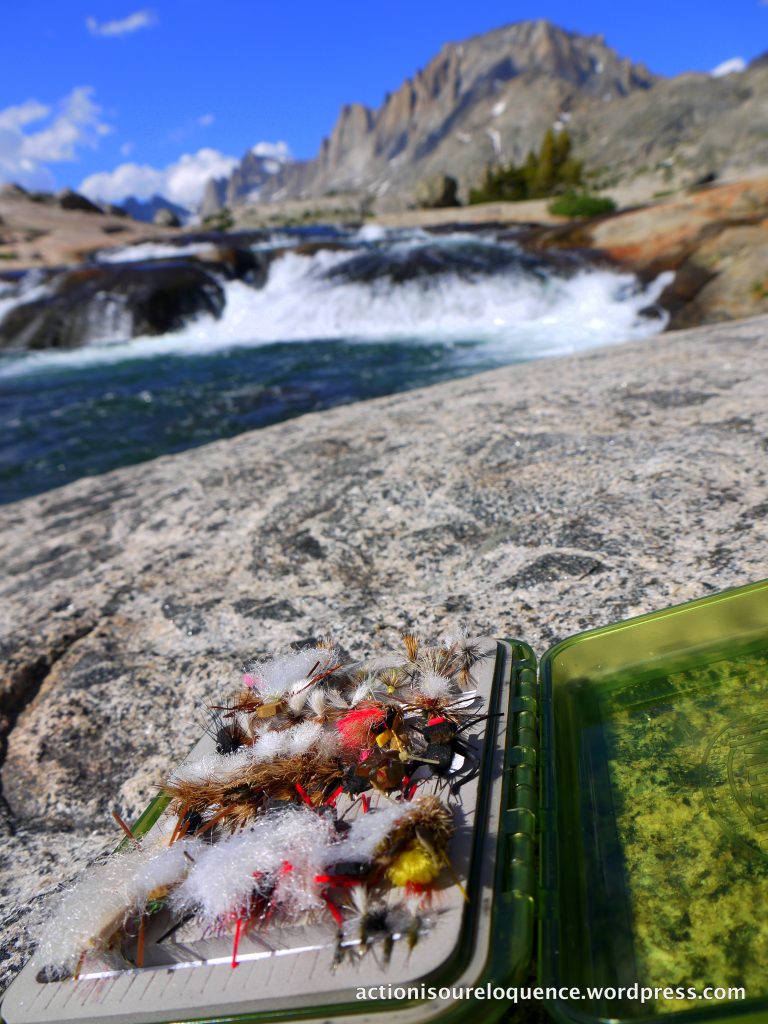 We fished the rest of the day away and made it another early night. It had been Sierra’s longest day at around 18 miles, but she still machined through the night and didn’t crash out until almost 10 o’clock. I don’t even know what we’re going to do when she’s older if she maintains this stamina. She is just like Josh. 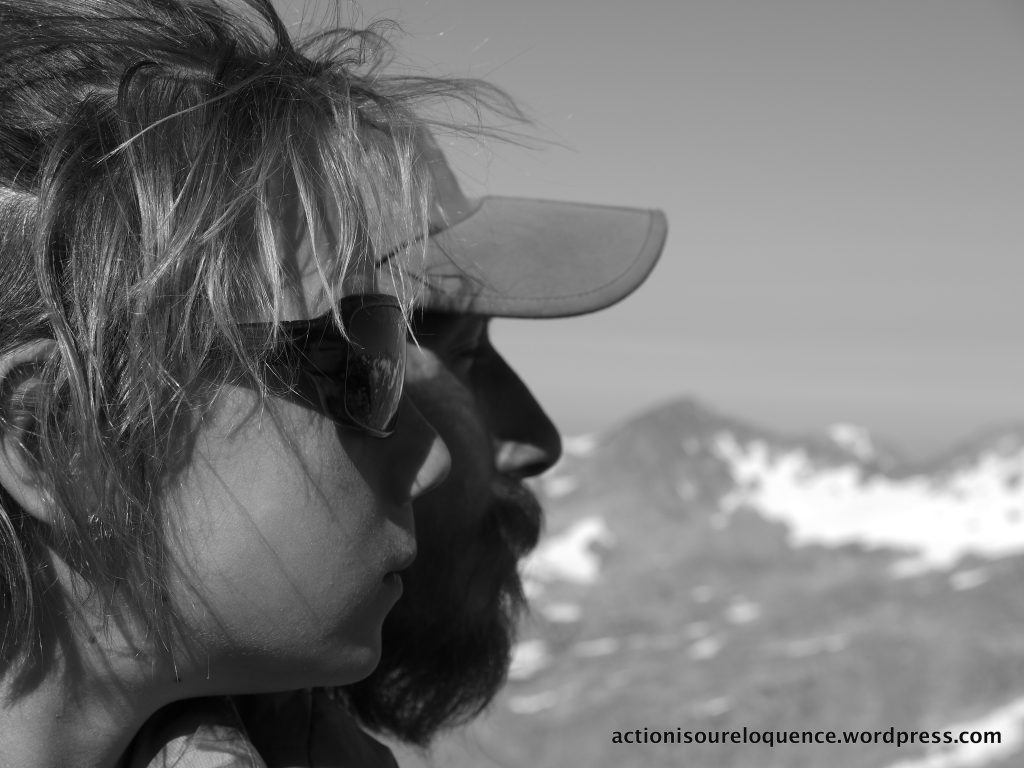 Our last day was full of more fishing and hiking out. Historically, we have always called Sierra “Turbo” because she is so charged with get-up-and-go, and she always goes at top speed. We chose Fremont Peak because we wanted to challenge her. We chose Fremont Peak because in our family this is how we celebrate strength and drive, and how we teach our young daughter that even if she is tackling a mountain, dedication and persistence and strength of character will get her to the top every single time.

We chose Fremont Peak, but she found herself equal to it.