After months of waiting, the ice and snow is finally upon us! White Pine opens in a mere three days and folks are already getting out with snow machines and cross-country skis. As always, a reminder to bring your beacon/shovel/probe with you into any backcountry situation and know how to use them. Now that we have a solid snow base, early season slides will be something every backcountry user should be on the lookout for. But now to the good stuff..

This picture was taken last Thursday (11.26.15) of the Blue Room area of the Fremont Lake ice falls. The falls are easily top-roped via the two bolts (also used as a rappel station) at the top of the cliff. The last three times we’ve been up there, the ice has been thick on the rock, enough to have to chop through to access the bolts. Remember to bring a long piece of webbing to allow the anchor to reach the cliff-line and a couple of ice screws for redirects if you plan on climbing any other part of the falls. The ice at the top is thick enough to take a 10cm screw. With the sub-freezing temperatures during the daytime the past few days , the ice should be even fuller than pictured.

Be sure to explore the cliff-line. Immediately to the left of the bolts are a few stout mixed climbs. Down from the Blue Room area there are three other forming ice falls that haven’t seen ascents yet this season. One would be a good beginner lead when fully formed, another a thin pillar leading to a quite vertical curtain. Top access for these via the cliff-line; build an anchor or sling a large tree.

Be safe down there. Be aware that though you technically aren’t backcountry, you are out there. You will find zero cell phone reception and a walk out on a sprained ankle (or worse) would be no bueno. There are two recently rappel stations built within the last month that help speed up the descent. Always check ropes and webbing for signs of wear before committing yourself to a system that you aren’t familiar with. 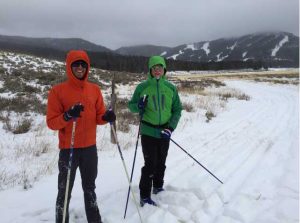 The snow is here! But you already knew that.. This picture is Fred and myself at the White Pine Nordic course on Saturday (11.28.15). The course is open with only a few areas icy or not fully covered. The trail has been groomed but not tracked. Conditions at Kelly Park are similar.

White Pine is very much skiiable. The snow at the top is a bit wind-scoured, but a quick hike to the top (or wait until they open on December 4th) will reveal a groomed lower part of the mountain and thick enough snow to ski on the top. As you can see from the picture, the runs are all filled in! Up towards Elkhart Park, you’ll find a solid 3-4 inch base with anywhere from 4-6 inches of snow on top. Great for some backcountry touring or early season snowshoeing. There are even still moose coming out of the mountains so if you’re lucky, you may see some wildlife.

If you have any other questions about current conditions please email info@greatoutdoorshop.com or stop by the shop.

“We surround ourselves with people like ourselves. You become what you hang around”