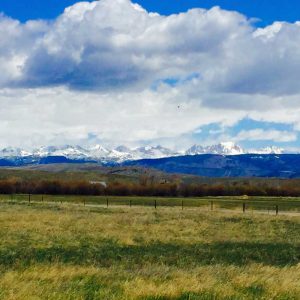 At this point in the year, Spring has finally reached us here in Pinedale and things are starting to thaw out. Although getting deep into the Winds is still a month or so away, wildlife closures have lifted and people are starting to get out and about. Many of the popular trail-heads are still covered in snow. For reference, the snow line is around 8200-8500 feet. This Means that the most popular trailheads, Green River Lakes, Elkhart Park, and Big Sandy Opening are still unopened.

As of last weekend, I was able to make it to the first big dip, past the second left turn, going out towards Big Sandy Opening. After getting stuck in the notorious mud pit at the bottom of the hill, I dug my car out and turned around to fight another day. At that point, there is about 6 miles or so left to get to the parking lot at Big Sandy trail-head. Barring a large snow storm, this trailhead could be open in the next month. At this point, Big Sandy Opening sits at 115% of the average yearly snowpack.

The trail-head at Boulder Lake is completely open. Be aware that the snowline starts soon after you start hiking.

Elkhart Park is open until you reach the first series of hairpin turns, before you arrive to the second scenic overlook. The snow is melting quickly and it’s evident that there has been visitors to Trails End camping area as recently as a week ago. Be aware that the road is quite rutted out at this point and a few trees have fallen across the road in places. Elkhart Park stands at 81% of the average yearly snowpack.

The trail-head at Spring Creek is open but is quite muddy and wet.

New Fork Lakes trail-head is open and getting into New Fork Canyon is possible on skis or snowshoes. The snowpack sits at 4% os the yearly average.

Green River Lakes is open up to the Hot Springs; past that, you may want a four-wheeler to get through rutted or muddy sections. GRL will mostly likely be the first trail-head open because of it’s openess and exposure to the sun. The trail-head snowpack stands at 75% of the yearly average.

The Wind River Range had an average snow year, meaning we may be able to get into the mountains relatively early. Warming spring temperatures will start to melt things out higher up as the month goes on. Dirt roads will continue to be muddy for some time so expect some mess if you’re trying to hit anything early season.

As always, if you have any questions about planning your Wind River Trips, need maps or trail supplies, call us at (307) 367-2440 or stop in the shop anytime between 8 AM and 6 PM, Monday-Sunday. We’ll be happy to answer any of your questions!