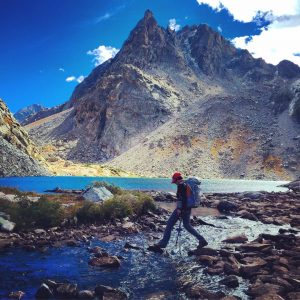 A warm, dry summer has given away to our traditional cool, crisp fall conditions. Two significant storm systems have impacted the Wind River Range since late August dropping the seasons first snow falls. These early season storms rarely have lasting impacts below 11,000 ft. Above 11,000 ft the the snow will linger in the northern, shaded aspects. Below 11,000 ft, the temperatures are still to warm for the snow to stick around very long. This should hold true through early October. There is still time for a late season backpacking trip taking advantage of great indian summer temperatures.

Climbers are continuing to see successful attempts on Gannett Peak. In most seasons over the past decade, the snow bridge over the bergshrund in Gooseneck Gully has melted out by mid-August. Not so this year. recent reports indicate that the snow bridge is still intact, and is unlikely to melt out before winter.

Cirque of the Towers

A few climbers are still making their way into the Cirque. North facing routes will have some verglas due to the recent snow falls. Now is a good time to jump on south facing climbs and almost have the place to yourself.

The trails in and out of Titcomb Basin are in good shape. Recent snow fall has melted and the trails have dried out quickly. Traffic into the basin is a fraction of what it is during mid summer.

Knapsack Col is melted out and still passable without traction aids or crampons.

Have questions about conditions not covered in this report? Give us a shout!