Many people don't even know it exists. Its call-out on trail maps is easy to miss, the tiny font crammed in amongst the many names of surrounding peaks and glaciers. It's also strictly off-trail, which is another reason so many overlook it. It's just a small, narrow notch between Winifred Peak and Twin Peaks. It sits along a short ridgeline that separates Peak Lake from Titcomb Basin. There are glaciers dotting along the horizon here and there, it is well above treeline, and I swear you can brush your fingertips alongside the timeworn surface of the peaks as you go.

But let me back up for a second.

September is the locals' favorite time to be in the Winds, and I am no exception to that rule. The golden days of summer are still there ripe for picking, but with a new, different crispness to things. It's not the same as the bright fresh days of springtime when the shiny green buds are tasting the bluebird skies after the long winter. It's like the difference between biting into a sun-ripened strawberry and a freshly harvested apple-the tang of autumn is tangible in the very air you breathe. It makes me want big miles and wide terrain in each and every day; thus begins the thru-hiking adventure of Green River Lakes Trailhead to Elkhart Park Trailhead via Knapsack Col. 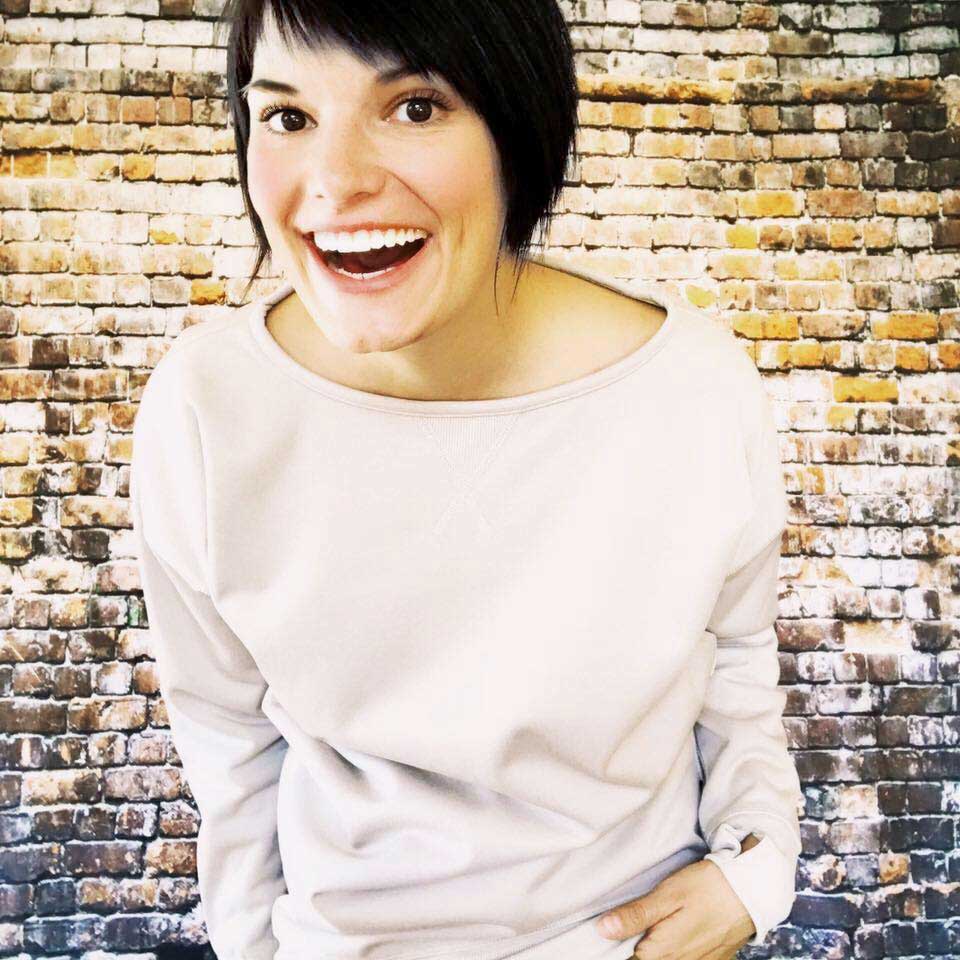 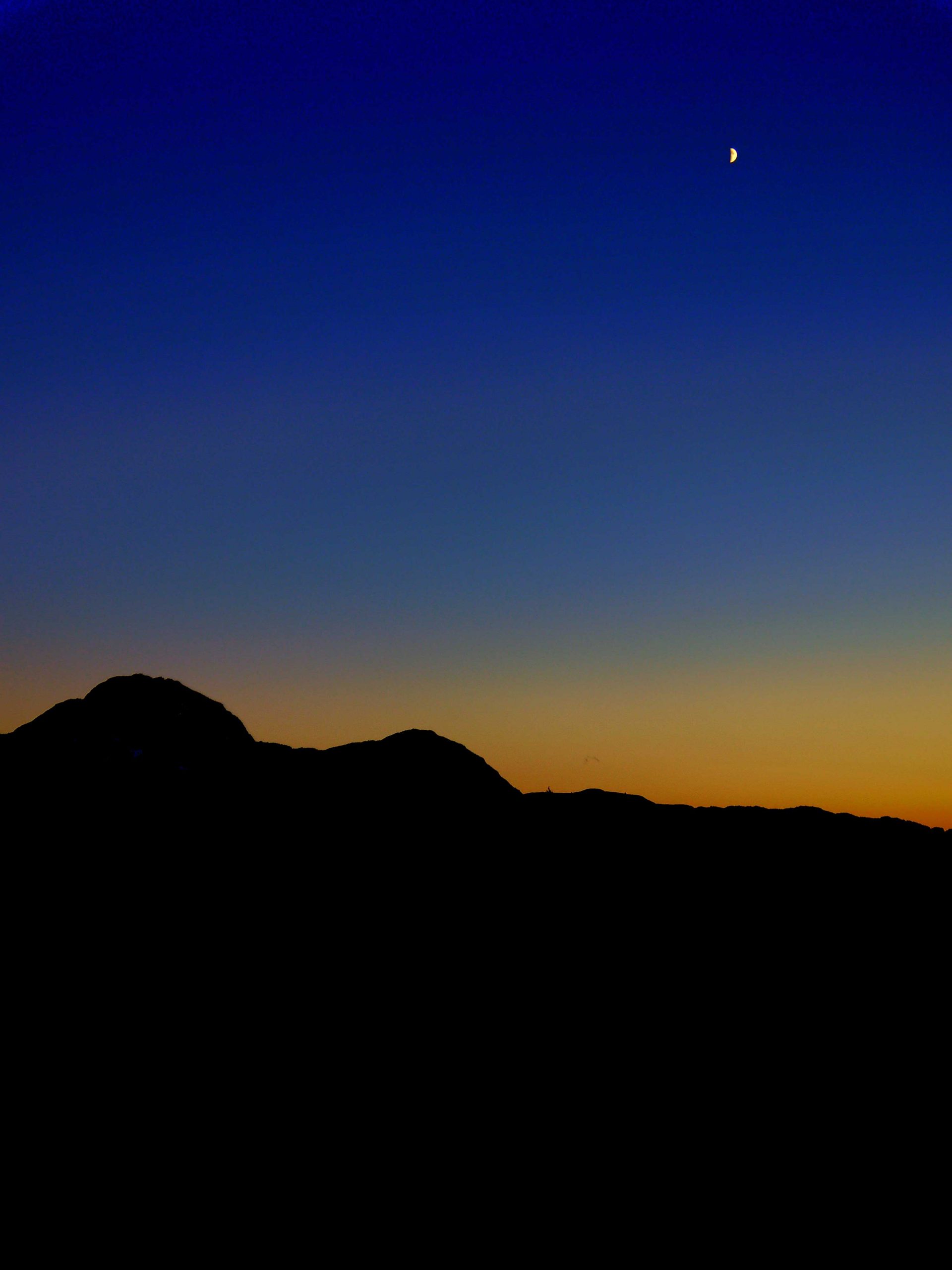 Our first night out was spent at the crest of Vista Pass after hiking in around fifteen miles. The scenery isn't as breathtaking as the name implies, but as we settled in for the night, we listened to the eerie mountain songs of elk bugling with the moonrise. Vista Pass becomes Cube Rock Pass through a peak-lined rock gully, so with each new call from the herd the sound would just echo, echo, echo its way down the valley to us before galloping away on the evening breeze. My arms broke out in gooseflesh with every bugle-the magic of it awakening my senses even as my eyelids grew heavy. So there we were-lying together beneath a night sky most people cannot even dream about. With the soft weight of the heavens resting so gently upon us, we fell into the comfortable lull that surrounds the mountains themselves and I drifted off to sleep beneath the timeless night sky.

From the crest of Cube Rock Pass you are met with your first view of Stroud Peak, unobstructed and dominating the landscape. Stroud Peak is every child's drawing of a mountain-its nearly symmetrical pyramid shape stands out amongst the other jagged and sheer peaks that make up the giant bowl surrounding Peak Lake. The view is jaw-dropping. Refrigerator-sized boulders lie strewn about in such a way it becomes easy to picture the gargantuan glacier that carved out this basin, leaving its mark on the peaks and surrounding terrain as it went. Stroud Glacier is the headwaters of the Green River, and Peak Lake, positioned directly at the foot of Stroud Peak, is pristine turquoise in the sun from the deposits of glacial silt straight from the source.

In the mountains, the horizon is interrupted by glorious towers of granite. You can see precisely where the earth meets the sky. You can touch it. You can climb right up to it and feel the sky welcoming you into its midst, settling comfortably around your shoulders like an old friend. Knapsack Col was the horizon. 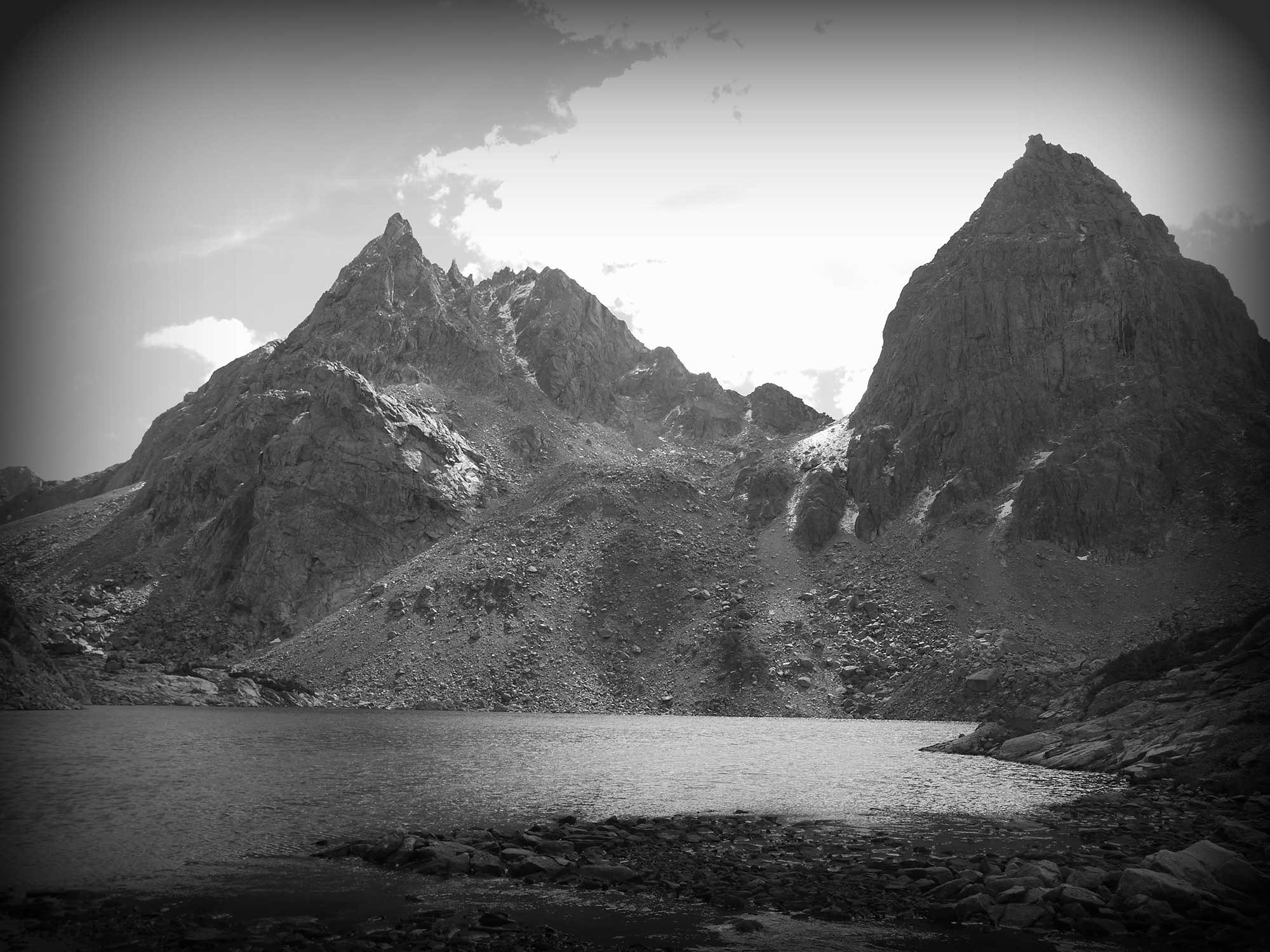 Knapsack Col brought tears to my eyes. This narrow knifeblade notch in between two peaks sits quietly atop a steep scree slope. It is wreathed in glaciers.

From its crest you are looking directly into the face of Mount Helen and Titcomb Basin lies below you, the upper lake barely visible-lost in the immense vastness of this rock valley carved out by mountains of ice and time. The sheer magnitude of this area hit me with full force, and the howling wind coming up the pass caused my tears to freeze, laying icy tracks across my cheekbones. My breath came out in sharp staccato gasps, irregular bursts punctuating what I was seeing and feeling with far more accuracy than any clumsy words of my own devising ever could. 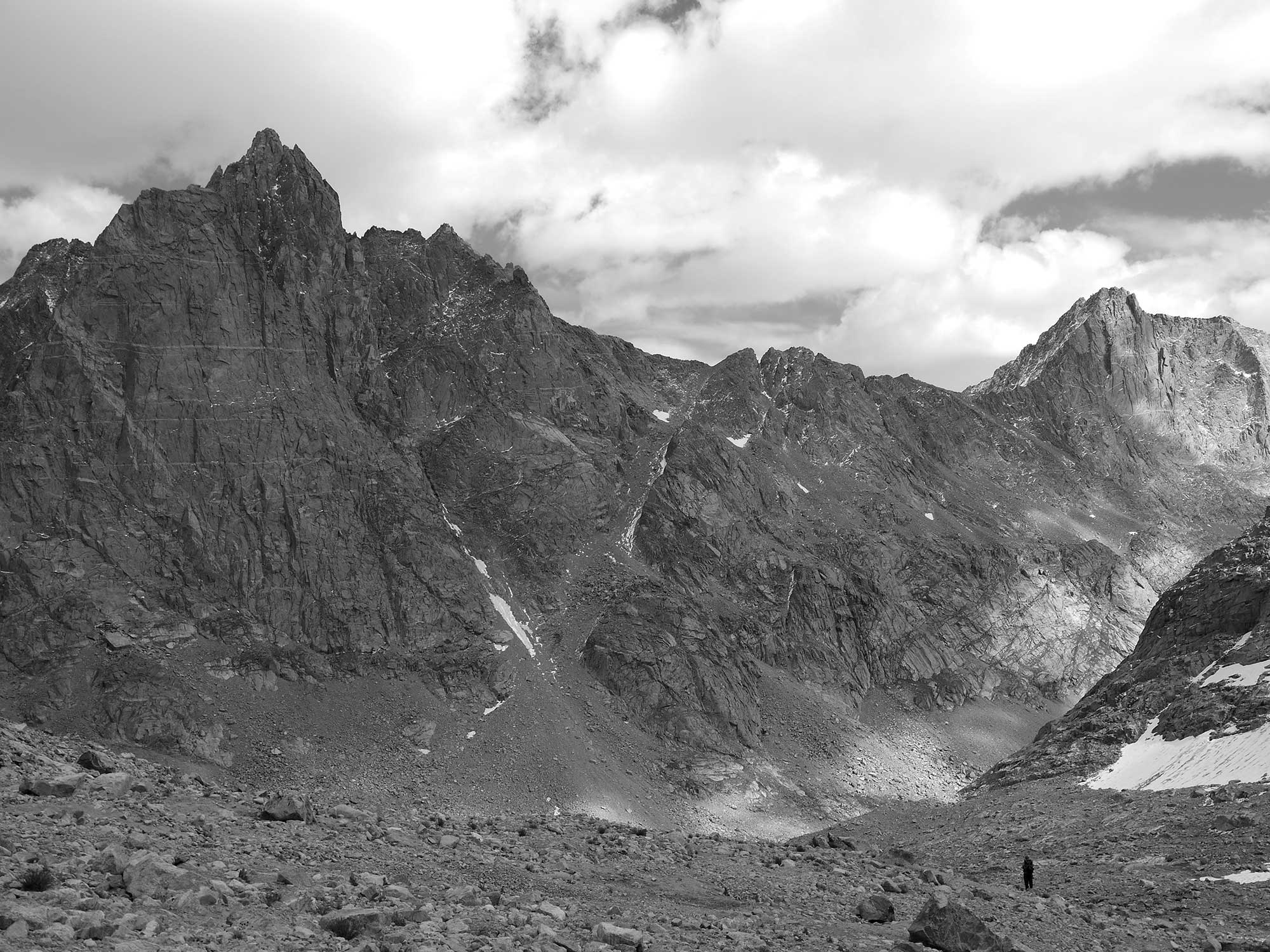 Along the way, we encountered plots of gold-tinted aspens glowing like embers in the midst of a forest of pine trees. We walked directly up to waterfalls, letting the wild spray of brand new water dance upon our faces while filling our containers and greedily drinking up the nectar of the great mountains themselves. We walked across fields of granite with the sun glinting down on us like a great cycloptic eye watching our minute progress across a valley as old as time. We listened to elk serenading the stars while the night sky quietly blanketed us with its deep velvet nothingness, and we witnessed the poetry of a lone osprey dancing across an unblemished sky so completely absorbed in the joy of the wind and the feeling of flight that it caused my heart to twinge in my chest.

And yet, nothing was better than standing atop Knapsack Col and looking out at the wide world below me. 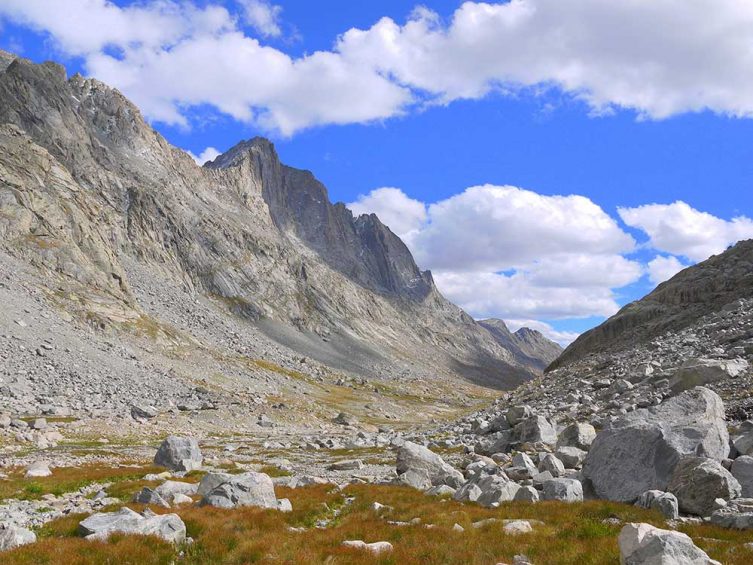 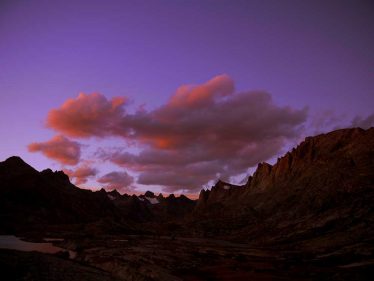 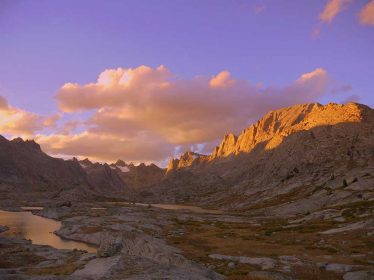 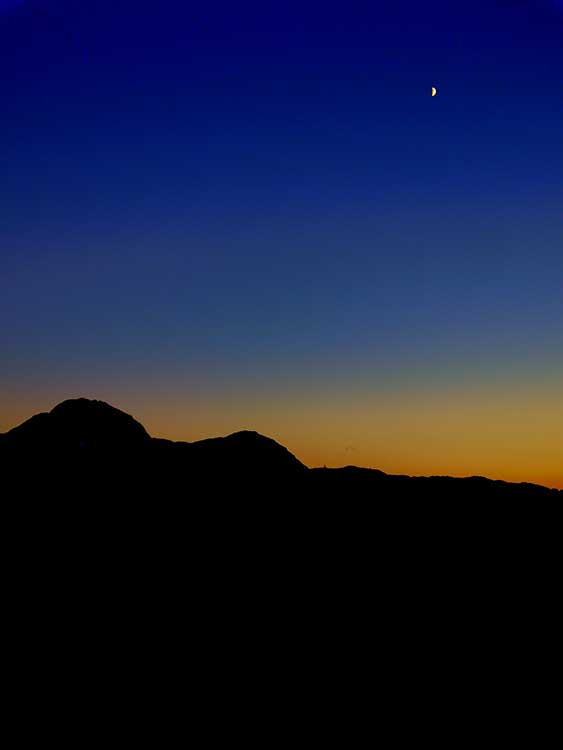 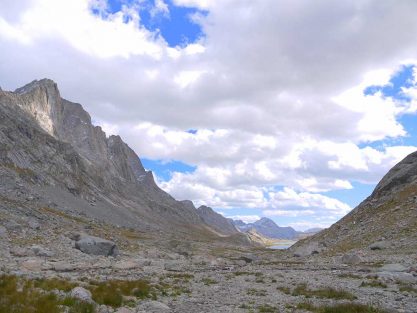 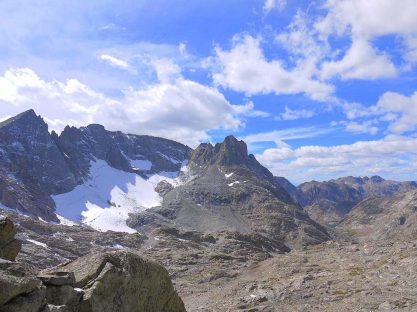 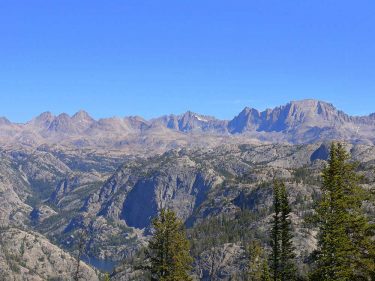 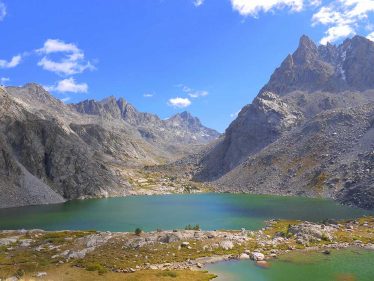 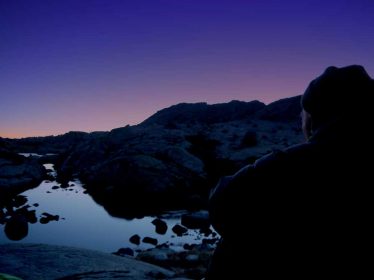 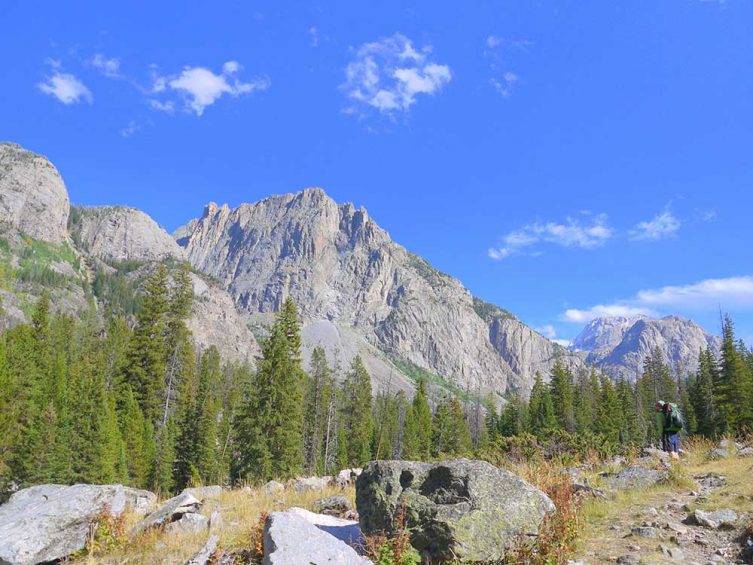 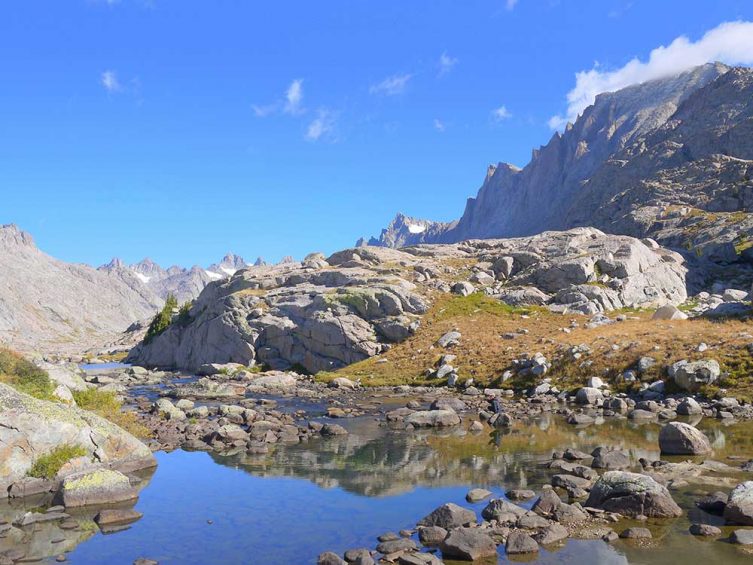 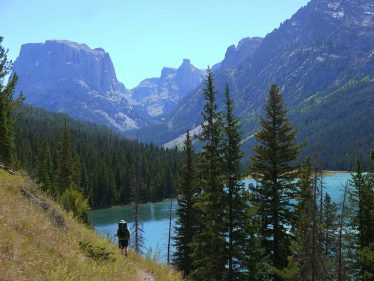 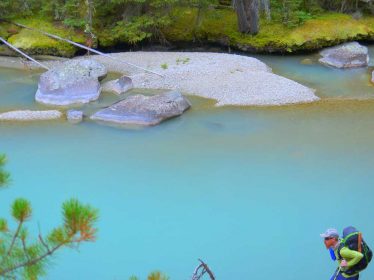 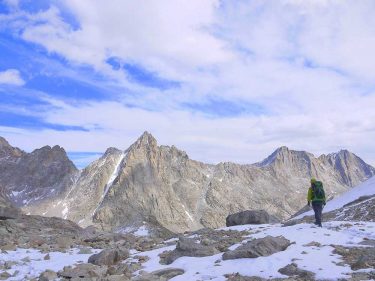 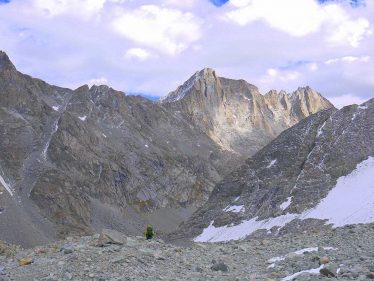 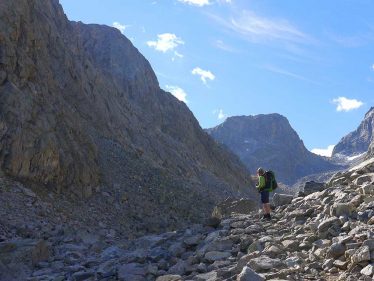 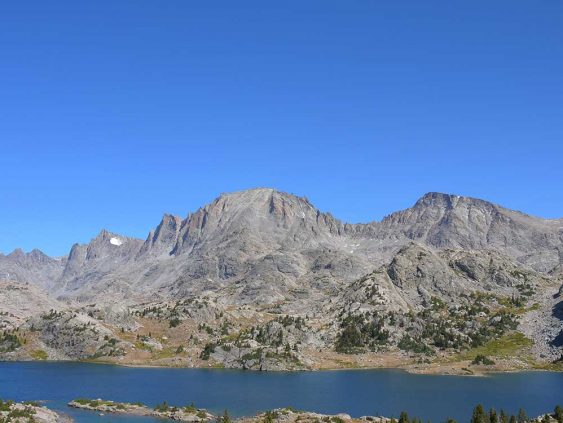 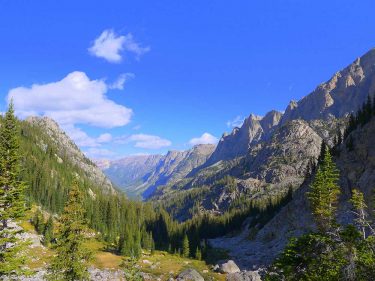 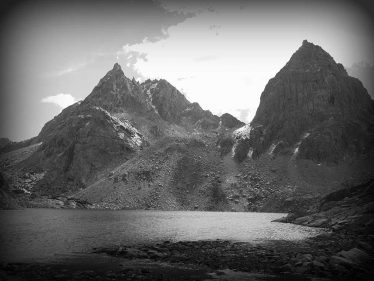 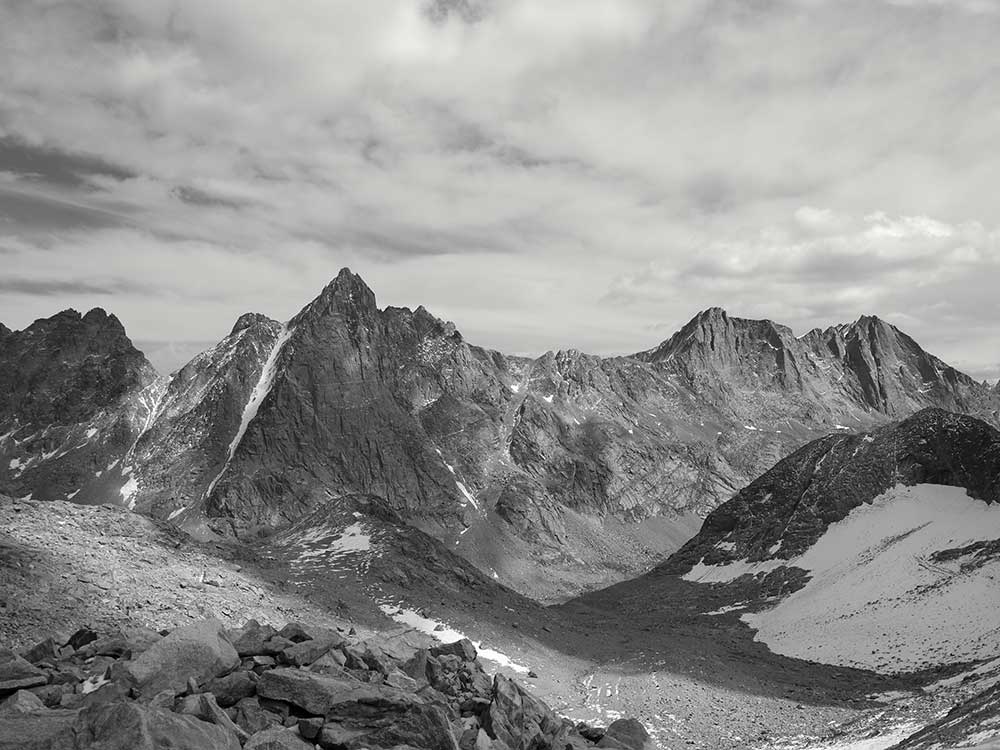