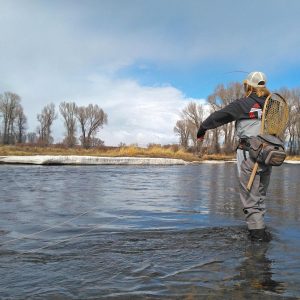 It’s warm and sunny and time to fish!  At least for now.  It looks like the weather might get a bit nasty over the weekend, but this week’s warm days have really opened things up and there is a lot of water to play on all of a sudden.  Water clarity has been a little variable the past few days with snow in the valley melting off quickly, but folks have been out catching fish and enjoying the sun.  We’re expecting some cold weather coming through, so clarity should be getting much better over the next few days and fish will be getting eager to pack on the pounds after this first little bump in the flows.

New Fork River:  ??? CFS.  The gauge is down, as are all of them.  Ice will do that.  Water clarity is fluctuating daily with valley snowmelt, but it’s not chocolate mud.  The important thing is that it’s open, it’s fishing, and it’s floatable from the Airport down.  Larger boats might still have some dragging to do (watch out for redds, please) on this section, but below Boulder you’re clear to go.  Fish are munching worm patterns, stonefly nymphs, midges, bwo nymphs, general attractor pattern nymphs, it’s nymphs, ok?  They’re hungry.  Maybe even hungry enough to smash that hairy monstrosity of a streamer you tied up after one too many beers at the vice.  You know the one.

Green River:  ??? CFS.  See above.  Water clarity is variable daily, but seems to be clearing at the moment.  The Green has opened up this week and some folks have been floating from Swain’s down.  No reports yet of floaters above there, so be aware of the possibility of ice dams or narrow slots if you’re venturing out to float above Swains.  Wade access is opening up at the Warren Bridge, Hatchery, and Houston’s accesses.  The road is still not accessible beyond the forest boundary on the upper, but it is walkable.  Pretty much the same story on bugs as the New Fork, get ’em deep and hug the bottom and you’ll find fish.

Seedskadee:  1030 CFS @ the dam.  Rainbows are spawning, so be nice and don’t fish the obvious redds.  If you can see the fish, don’t cast at it.  It’s not that hard.  Otherwise, put some egg patterns, scuds, sowbugs, or hothead pheasant tails on and nymph up the big browns sitting in the deeper holes and runs.  Flows are fluctuating slightly every day,  but generally hovering at 1000-1100 CFS, so fish are plenty stable and happy and eating.

Smaller Creeks:  Starting to slowly open up, and some, like Duck Creek, just jumped significantly in water level over the last few days.  As they clear in the next few days, fish will start moving up into them from the main rivers and some big hoss lunkers can be found in small water.  Get your sneak on and you might have a chance at a beast.