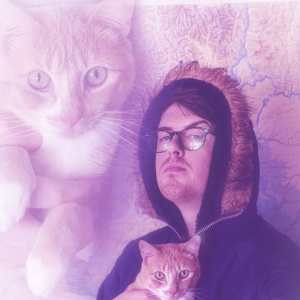 Brandon moved back to Pinedale after spending several years in Seattle, because, duh, Pinedale is WAY better than Seattle, although both are a notch above Nebraska where he’s originally from.

Brandon was originally drawn to the mountains here as a climber and hella good snowboarder. But, after spending approximately 934 hours jumping on the trampoline with Sierra, exploring the Winds and playing soccer with Travis Rice at a birthday party, he was hooked and has always felt home in Wyoming.

Brandon is an incredible artist and graphic designer with a sense of humor that fits in well with Laura’s bludgeoning sarcasm, Josh’s quiet wit and the whole crew’s general shenanigans, so although he mostly works from home he fits right in.

He loves baggy spandex, rock hard Clif bars and exceptional coffee. He taught his cat how to give high-fives. That says more about him than probably anything else in this bio does.