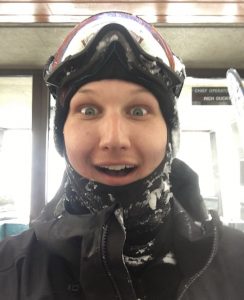 Yeah, weird name. It’s like the Utah version of Dylan. Just go with it.

Dalan maintains the same level of enthusiasm as displayed in this photo for pretty much every single thing ever. But somehow it’s not even irritating. Like it’s all good energy. This intensity especially resonates with Laura, who was born caffeinated. If you put the two of them together with an energy-harnessing device they could probably power a community.

Dalan is a terrifyingly good skier and whitewater kayaker. Like the kind of stuff that most people would look at and go, “Nah” he’s like, “HELL YEAH” and then he just? Like HURLS his body toward the danger, laughing like a maniac. If he used his powers for good instead of just straight adrenaline he’d probably be a superhero. With a weird name.

He has terrible taste in music, though. So there is that.