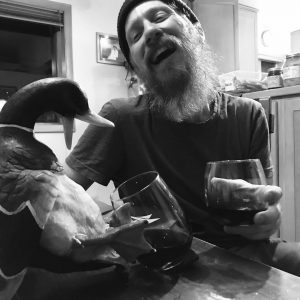 Josh is a machine in a plain gray hoodie. And plain gray pants. And plain gray shoes. For him, a day out usually involves huge distances, huge elevations, huge fish or ideally, all three. Whether climbing, backpacking, fly fishing, snowboarding or ice climbing, he is determined to make the most out of each outing, and is happy in all outdoor pursuits. His hobbies include alpine starts, hockey, wearing sunscreen and drinking roughly 37 cups of strong black coffee every day.

Josh is a race director for the Surly Pika Adventure Race and The Drift winter ultramarathon series, and helps Laura with the Wind River Mountain Festival.

Josh is the most patient person on the planet. He puts up with all of Laura’s harebrained ideas and must find her clumsiness and general chaos endearing.

And he’s one of those really quiet but deep-down-ornery guys-you know the ones: they keep to themselves and never raise their voices but in secret they’re ornery as hell and cause all sorts of problems for reactive people (like Laura in particular). Then, when they’re caught out, no one ever believes that they’re capable of doing that stuff because they’re so nice. Yeah. He’s just like that. Don’t be fooled.

Josh is the steady one of the group. He keeps us all in check and on task.

His appetite is incredible. You’d never know it to look at him, but he’s a secret beast.